Help us create our training centre, to help the young Beninese in lack of school to become autonomous. 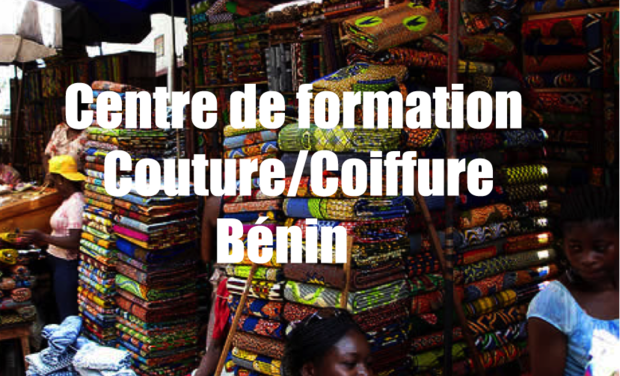 and Maire of Bohicon District ( UCOZ )

In Benin, poverty has raised at national level, increasing from 36,3 % in 2009 to 43,2 % in 2016. In spite of the attempts of the various governments to lower this phenomenon, according to Benin National Institute of Statistics and Economic Analysis, the results are distressing.

In peri-urban and rural areas, the situation is very preoccupying. For the record, the jobless people don't benefit from any allowance ; thus, families have to face the most primary needs, as food, water, and electricity.

Most of the parents can't decently feed their children, they have trouble enrolling them at school or paying school tuition fees.

Those parents, being in a precarious position, are unable to pay the flat-rate amount that would allow their children to go on a vocational training course like hairdressing or sewing.

For lack of employment, those children, once they are graduated, don't have access to financial needs to employ themselves. Thus, they become an additionnal burden for their parents and are stuck in the same poverty revolving door cycle.

3.2. Overall objective of the project

The overall objective of the implementation of this pilot project is the youth empowerment. The young people will, previously, go on a vocational training course in shortage activity sectors that are hairdressing and sewing.

The target public are the vulnerable layers, like children in lack of schooling or adults from 16 to 25 years old.

3.3Specific objectives of the project

Specifically, this project is about :

- reducing the alarming poverty rate in Benin to reach the Sustainable Development Goals by 2030 (SDG) ;

- putting youth at work to get rid of poverty ;

- improving population life quality by work in order to live in accordance to human dignity ;

- reinforcing partnership with other politics that care about youth ;

- implementing development strategic plan so that, in the end, we can popularize the experiences in every Benin departments.

The project will start on the 2nd of January 2019. The duration of the training in sewing and haidressing will be one year for the beneficiaries.

The main recipients are children in lack of schooling or adults from 16 to 25 years old ; there are 2500 of them.

6.1. Location of the project

The project will be established in the district of Bohicon, crossroads city in the centre of Benin and among the 9 districts of the Department of Zou.

In 2013, at the time of the last population census, (General Population and Housing Census – RGPH), the temporary results enumerate a population of 170 604 citizens, of which 53% of women. This confirms Bohicon's status of high human density city, with 1 227,3 residents per square kilometer.

There are many obstacles around this project, project that considers women. There is no doubt that, if all those obstacles are overcome, this project will significantly play a part in the economic development) of the country.

Indeed, « women represent half of the labor potential supply of a country . Increasing women productivity is increasing the whole economy productivity.

When women work, they make less children and have more decision-making power about schooling, health and their own children nutrition. If women don't have employment opportunities, and that they stay at home, fertility will stagnate. (...) »

Any thing that acts on the demographic dividend.

« Women will make 2030 Agenda really inclusive and transformational » claimed Phumzile Mlambo-Ngcuka, Under-Secretary-General of the United Nations et Executive Director of UN Women, on the occasion of the internation women's day, on the 8th of March 2016.

Taking actually women into account in these projects, being in keeping with the Government Action Plan, will contribute to accelerate Benin march in the carrying out of most of the SDG, in particular the numbers 1, 4, 5, and 7.

8. Carrying out strategy and stustainability of the pilot project

In Disctrict Development Projet of the District of Bohicon, youth is on the heart of the projects but, unfortunately, the resources of the town council don't permit to create activities able to occupy this youth, and enable it to live in accordance to human dignity.

So, on the face of this District Development Project, it appears that sewing and hairdressing are among other popular business sectors.

The carrying out of the pilot project will take into account the two above-mentionned activities. These will take place in the same building, which will be split into two : an area for sewing and one for hairdressing.

Traditionally in Benin, the jobs of dressmaker and tailor are separate, the first dressing the women and the seconds men.

But, at the training centre and youth improvement, both will be gathered together into a single workshop, with a tailor trainer and a dressmaker trainer, teaching their arts to both female and male apprentices, who will be polyvalent.

Recruitment notice will be post in order to select the trainers. The selection will be made according precise criteria. The trainers will have the difficult task of sharing their own experience with children in lack of schooling.

The profit will allow the training centre to become established in other areas, districts and villages. It will also be used to subsidize the apprentices at the end of the training course, so that they can create their own training workshop.

In compensation of the grant, they will commit to be the mentor of at least two girls per year, in order to increase the number of recipients in each area.

Some of the members of the ASBL BELGO-BENIN have been to Benin several times ; they are active in some orphanages and also at Zou Department Hospital. They work together with the NGO « QUE DEVENIR BENIN ». For those reasons, these members are sensitive to the situation of the Beninese people.

Legally constituted, the ASBL BELGO-BENIN has the intention of making a contribution by seeking the philanthropists' clemency, in order to reduce, if not eradicate, poverty. For poverty is a huge phenomenon for one to pretend he could, once and for all, eradicate it.

Besides, the financing to the implementation of this centre will contribute, in the long term, to reduce the youth unemployment and precarious situations.

It will also reduce the number of « valid arms » looking for a better future, some of whom end up crashing into the Mediterranean Sea.

COLLECTION OF FUNDS AND CONCRETETING ACTIVITIES

-- Reduction of 8% of the total amount collected, ie 5% of KissKissBankBank and 3% of management fees.

* 20.000 €: Acquisition of the parcel and concretization of the Post Office Equipment and tools

* 30.000 €: Implementation of the investment and equipment tools item.