Help us create a championship race car from a standard Citroen 2CV6 special road car! The car will be entered into the 2014 championship. 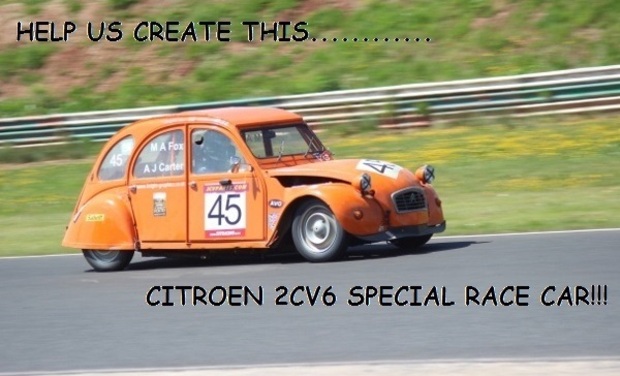 We are a father and sons team, my name is Ash and I am 35, Patrick my eldest son 15 is head mechanic (he works in his spare time at a local garage) Billy is 7 and loves racing as he is in charge of cleaning the car - Charlie isn't taking an active role as he is only 18 months old but we cant get him out of any kind of car!

We will be taking on all the work ourselves even down to spraying the car, as said before Patrick is a mechanic in his spare time and I have experience in car builds and auto electrics. We aim to be in the 2014 UK Citroen 2cv championship and are realistically looking to be the top running new entrant and start to mix it with the seasoned competitors in the top ten of the series.

A little about the project - We have to strip out and rebuild (according to championship regs) although We can design and implement different ideas as long as they conform. what could be more challenging than making a little French car run competitively for 24 hours ? for me this is the driving force behind this project, We want to build the car and be out testing early next year in preparation for what we see to be the build up to the 24 hour race - four race meetings in which to modify and build on what we hope to be a solid base for a race car, we also aim to be competitive in the sprint race series too. Also as the driver I have to get myself up to speed for the challenge too, I have raced in the championship but alas in someone else's car. I know I have the drive and ability to implement this task and we look forward to the challenges it will present.

addition of rain light to rear of vehicle

addition of a roof!

add a 2 to 1 exhaust system

removal of material from A panels pictures

Below are parts of the car we have already rebuilt or stripped off and cleaned ready to be put back together!!

Funding our project has rewards and will help us realise our dream of making the race car, all the modifications needed to turn the car from road to race!