It's a collective art exhibition featuring pigs as symbols of moral and sexual prejudice. 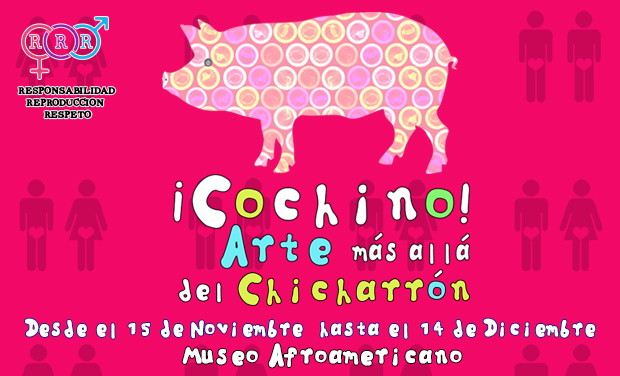 The exhibition is part of "Responsibility <-> Reproduction <-> Respect", a cultural, social and educational project created by the Foundation ArmoCultura, aiming to encourage the criteria regarding pregnancy and sexuality in adolescents in Venezuela, one of the most affected countries in Latin America and the world.

We chose the pig as a theme to approach adolescents’ sexuality, because this animal represented to the ancient Egyptians the transmutation from noble to ignoble, descending into perversity. During the Dark Ages, it was a demonic symbol in Europe.

Nevertheless, they are intelligent creatures, covering their bodies in mud in order to kill parasites and to preserve their hygiene. They can also have up to 30 minutes orgasm, something some humans would love to have.

Sexuality has always been subjected to a series of prejudices related to being dirty, impure, carnal, morbid, perverted, all of these having nothing to do with sexuality itself but with human attributes linked to this activity.

Let’s consider then that the pig’s figure is an excellent metaphor in the nuances and variations happening during the sexual development in teens and thus, it should be approached and understood by society when they talk about it.

We aim to call upon 100 Venezuelan and international artists to participate with a ceramic piece representing a pig or a sow.

These art pieces will be displayed and will have interaction with the permanent exhibitions of the Afro-American Art Museum of Caracas from November 15 until December 14, 2014.

The artworks in the images are transformed by hand by the plastic artists Wolfgang Vegas and Jannaky Tsioros. These artworks' style would be similar for all we will make. The organizers thought it would be a good evidence for the rewards in different sizes. Also, each pig artwork is unique

The Illustrations are Daniel Arzola

During that time, we expect to involve organisations, companies and interested persons in funding, sponsoring, promoting and collaborating with the project         "Responsibility <-> Reproduction <-> Respect".

The artists will get 30% of the sale’s profit and the other 70% will be invested in the Introduction to Making Audio-visuals Workshops; addressed at 150 young people between the ages of 14 and 19, in different places throughout Venezuela. Several documentary makers will do an audio-visual follow-up of these workshops, and this material and the experiences related by the students, will be used to make the Documentary Film “Kinsfolk”. All these activities are part of "Responsibility <-> Reproduction <-> Respect" project.

We believe that an art exhibit is a good way to encourage effective discussions related to the problem of pregnancy and sexuality in adolescents in Venezuela.

Statistics published in 2012 by CEPAL (ECLAC), an organisation affiliated with the UN, show that Venezuela has the highest percentage of teenage pregnancies in South America and the third highest in Latin America after Nicaragua and Honduras.

According to estimates, in 2001, the mortality of babies born to teenagers was 33%, higher than that of women 19 years old and over. Also, teen pregnancy is intimately related to poverty conditions, as well as sexual and gender violence, and STDs.

The problem is urgent and we are one of several organisations working on it. Nevertheless, we truly believe we should approach this reality from an artistic perspective.

The ARMOCULTURA FOUNDATION objective is to develop, research, teach, promote and protect in the best of conditions, publicise, support the manifestation of different art forms and sponsor cultural, charitable and social activities that will motivate cultural human development and their own viability both national and worldwide.

The project team is formed by Venezuelan professionals with experience in production of cultural events and audiovisual production.

Jannaky Tsioros (Caracas, 1970). Senior Producer. Specialises in cultural events of medium and great magnitude, audio-visual productions for TV and movies in the field of general, executive and field production.

Veruscka Cavallaro (Valera, 1975). Graduated in Social Communication from the University of Zulia. She loves to write literature, and subjects related to journalism and fiction. Teaches scriptwriter workshops for young people. Directs and writes documentaries, medium-length film and TV series.

Carolina Graterol (Caracas, 1979). Psychologist degree from Central University of Venezuela. Researcher in the field of speech with the aim at conducting surveys, research and studies to assist with the understanding of collective life.

María Gabriela Navas Carrillo (Caracas, 1994). Photographer with a degree in Marketing. She specialises in production and audio-visual. She has worked as editor in the field of logistics, event productions, and radio.

Abraham Castillo Báez (Maracay, 1995). Has a degree in Data processing. Sociology graduated at the Central University of Venezuela. Collaborates with a photography studio. Community Manager at Ochi Producciones.

- We’ll make 140 Original pieces using ceramic, so artists can use them and apply their technical, and transform them into works of art.  We’ll need 1,200.00 €.

- Personnel’s symbolic honoraria for 7 months. Personnel which be responsible for management, supervision and assessment of the artists’ work for the proper development of this exhibition. We’ll need 1,400.00 €.

- The making of 100 Presentation Modules, where will be placed the artworks done by the artists we invited to join our exposition ¡Cochino! Arte más allá del chicharrón. Each presentation module has a cost of 20€. The total cost is 2000€.

- Virtual catalogue, we need the money to hire a photographer and a layout designer, each one of them will be responsible for the making of the Virtual catalogue and taking photos of the artworks. The cost will be 1,100.00 €.

- Publicity on newspapers, TV, radio and social network. The investment is for the responsible of taking interviews on the media. 900.00 €.

- Carry out expenses. This money will be used on Office expenses that the Exhibition needs to be carried out. We’ll invest 1,600.00 €.

If we surpass the amount set, any extra money and the profits from the art pieces’ sale will go directly to fund the Introduction to Making Audio-visuals Workshops, as well as to the movie Documentary Film “Kinsfolk”, part of the "Responsibility <-> Reproduction <-> Respect"  project.

You receive a personalised thank you in our social networks and in the virtual exhibition’s catalogue.

You receive a personalised thank you in our social networks and in the virtual catalogue and three post-cards from the exhibition.

You receive a personalised thank you in our social networks and in the virtual catalogue and three post-cards and an exhibition’s poster.

You receive a personalised thank you in our social networks and in the virtual catalogue and three post-cards and a ceramic Pig 4x6x5 cm.

You receive a personalised thank you in our social networks and in the virtual catalogue and three post-cards, an exhibition’s poster and a ceramic Pig 6x10x8 cm.

You receive a personalised thank you in our social networks and in the virtual catalogue and three post-cards, an exhibition’s poster and a ceramic Pig 8x12x10 cm.

You receive a personalised thank you in our social networks and in the virtual catalogue and three post-cards, an exhibition’s poster and a ceramic Pig 10x16x14 cm.

You receive a personalised thank you in our social networks and in the virtual catalogue and three post-cards, an exhibition’s poster and a ceramic Pig 15x38x22 cm.

You receive a personalised thank you in our social networks and in the virtual catalogue and three post-cards, an exhibition’s poster and a one of a kind ceramic Pig by Venezuelan plastic artist Wolfgang Vegas.

You receive a personalised thank you in our social networks and in the virtual catalogue and three post-cards, an exhibition’s poster and a special invitation to the Opening of the Exhibition. A return ticket from France, Italy, Germany, Portugal or Spain to Venezuela. 5 days in a 5 stars hotel with breakfast included. Local transportation with driver and a guide-translator. Possible visits to the artists participating in the exhibition.