A web documentary on the realities behind the FIFA World Cup 2014. 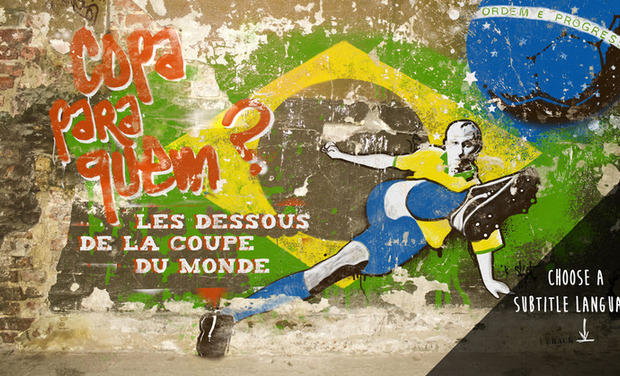 In a couple of months, Brazil will host the FIFA World Cup 2014. An estimated 3 million tourists, of which 600 000 foreigners, will take part in the event and will be travelling around the 12 host cities. Football fans from around the world are eager to take part in what is portrayed as the most prestigious Cups of all time, taking place in the country of football.

However, one may ask if Brazilians share this enthusiasm? Anger is brewing in this paradoxical country, which has emerged economically in the past couple of years all the while being home to tremendous social inequalities.

Last June, millions of Brazilians expressed their discontent and their opposition to the World Cup in the streets countrywide. Their slogan was ‘Copa para quem?’, meaning ‘Who benefits  from this cup ?’. Many amongst them even call upon their followers to boycott the organisation of the Fifa World Cup.

Who are these demonstrators and what are they trying to denounce?

How is this World Cup really implemented in Brazil?

What will be the true consequences of this event?

We need your financial support to complete this project, thereby giving a voice to those who are usually excluded from mainstream media.

Release scheduled for may 2014.

To be able to answer those questions, we have decided to investigate in one of the twelve host cities of the World Cup: Fortaleza. The Capital of Céara, Brazil’s poorest state, the city by itself exemplifies the Brazilian paradox. Behind the luxurious coastline, the hotel resorts and the wonderful beaches, lies a world known for its sexual tourism and prostitution, its favelas and its thousands of street children. A much gloomier reality, which  bears no relation with the image Brazilian authorities relay through mass media channels. As a result, city officials have started giving the city a cosmetic makeover.

During many months, our team has lived in Fortaleza. We have met with angered Brazilians as well as with the ‘unwanted’ that authorities try to hide by throwing them out of the city. This transmedia project aims to give them a chance to express their opinions so as for us to better understand this darker side of the happenings in Brazil.

Our web documentary will explore four major topics through four 8 minute long videos. Each video will follow one main character: a key witness of a reality that he or she will share with us.

Since many months, the city of Fortaleza is one big construction site. Officially aimed at improving the cities infrastructure for the World Cup, many of the constructions have led to the eviction of more than 2100 families and could lead to the displacement of another 12 000 people.

Fortaleza is well known for its sexual tourism and infantile prostitution. The World Cup will flood the city with foreign tourists. Prostitutes in Fortaleza expect an important increase of clients during the Cup. Do they still concider the World Cup something positive?

There are more than 8000 street children in Fortaleza. Rejected by everyone, they are the first victims the city’s social cleansing. They are kept away from the city-centre by police force leaving many indifferent.

Last June, during a football game between Fortaleza and Mexico, a demonstration gathered more than 30 000 people protesting in the streets of Fortaleza against the World Cup. While the reasons for taking the street are multiple, protesters are united  in their opposition to the use of public money to organise the World Cup.

We hope to collect an amount of 5000€ through KissKissBankBank, hopefully, this will be added to our initial envelope and amount to a total budget of 20.000 €.

To this day, the project has received financial support from the Belgian Professional Journalist Association (Association des Journalistes Professionnels de Belgique), which has allowed us to work on the pre-production of the project as well as one month of on-site shooting.

To be able to continue and finalise our web documentary, we would need one last financial injection which would enable us to join the many testimonies of the people we met into a harmonious story, as well as  work on the post-production.

Your support will help make the difference. It will enable us to work on the graphic and web development (2500 €), to edit a 26 minutes version of the documentary for national broadcasting  (1500 €) and to help us promote the project and organise a launch event (1000 €).

If you don't have a creditcard, you can still support us by making your donation via bank transfer to the following account: BE11 8508 6528 3848 (BIC code: SPAA BE 22), and with the following communication: "Donation KKBB webdoc Copa para quem".

Your name as contributor in the end credits.

Your name as contributor in the end credits + an invitation to the launching event of the documentary in Brussels with the team.