UPSIDE DOWN Support my exihbition project 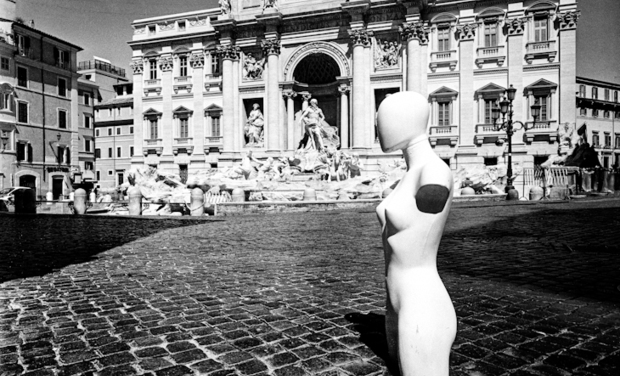 This exihbition concept UPSIDE DOWN covers a unique experience in a historical period that no one will never forget.

During the lockdown, I was surrounded by the infinity of empty spaces. While in Rome, I often looked up at the sky, our envy Roman sky, and thought that just before the pandemic I was about to leave, ready to go to Syria for a photo project linked to music in the war territories.

Did I want to document a war? I was satisfied anyway.

From the beginning of March until May 4th I toured all of Rome, with the face mask, the journalist's pass and the coffee thermos, dated 1974.

I lay on the ground looking for the right angle, because there is only one right angle, the others are wrong. I need this position to portray Rome, as I see it today, as I see it, just as the Romans could not see it locked in their homes.

Such a great commitment was the emptiness!

The void was unbearable!

The swarming of people had prevented me, during fifty-four years of Roman life, from clearly distinguishing every road surface, every carpet of "sanpietrini" and the marble slabs of every single step. The details were now all available to me, without the need to build a set or to imagine them.

And thus was born the urgency to put limits on that vastness to avoid, perhaps, my own bewilderment.

Humbly, but consciously, I resorted to the metaphysical elements of Dechirichian inspiration, projective of each one's intimate experience.

Maestro Giorgio de Chirico, in the series of "Metaphysical Squares" explaining the birth of "Enigma of an autumn afternoon", declared that he had been a vision, as if he had "seen those things for the first time and the composition was revealed to him in the eye of the mind".

Danilo Mauro Malatesta was born in Chicago in 1966 and has been involved in photography since the age of 20.
From 1986 to 1999 he collaborated as a photojournalist for important newspapers (Corriere della Sera, Repubblica, Time, Panorama, Espresso, Paris Match) which allowed him to tell, through his shots, crucial historical moments.
Despite the digital deluge, his heart pushes him against the current, so much so that he rediscovers an ancient photographic technique such as the Wet Plate Collodion. A photograph on the fringes of contemporary photography that the artist defines as "a therapy against the digital bombing we are experiencing" His most important works have been exhibited in prestigious frames:
The "Shroud of glass" at the Turin Shroud Museum
"De Secunda Pietate" at the church of Sant'Andrea al Celio in Rome
"The voiceless shadows of the Omo Valley" in Tokyo at the Metropolitan Museum.
"Around the wall" Ferrara festival Authors Travel Diaries.
"Upside / down" Rome Papa Agapito Library 1

The funds raised will be used to finance UPSIDE DOWN exhibition.

Here's more details for what is needed: