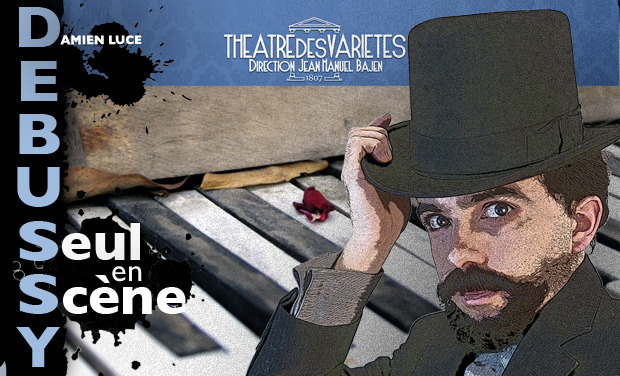 1918. Debussy has only a few months to live. He will not live to see the armistice. We find him at his piano. While letting his fingers wander over the keyboard, he talks about music, war, his disease, his encounters, nature, his daughter Chouchou (who makes furtive appearances), all on a sometimes caustic , sometimes contemplative tone. Here and there, he performs one of his piano works. This show allows the audience to discover the intimacy of a great composer, his wounds, his rebellions, his joys. The full text is by Claude Debussy. This monologue was built from his correspondence. Far from being just a concert reading, this show is a musical theater performance and walk in the footsteps of a unique composer.

I have grown in recent months a vast field of lazyness, whose crops were wonderful.

The smile of the Mona Lisa has probably never existed physically, yet its charm is eternal.

The best we can hope for French music, is seeing removed the study of harmony as practiced in school, which is the most ridiculous manner to assemble sounds.

An artist is, by definition, a man accustomed to dream and who lives among ghosts ...

The trees themselves are good friends! They accept, renew themselves, despite the centuries. Isn't it the most beautiful lesson in philosophy?

It is deeply indifferent to me that tomorrow, noone plays my music.

Keep in mind that a critic never likes what he has to write about ...

Pianists are bad musicians, for the most part, and cut music into uneven pieces, like a chicken.

Did you know that in Clarens there is a young Russian musician, Igor Stravinsky, who has the instinctive genius of color and rhythm?

I need a lot of patience to stand myself!

I recently tried a Radium treatment, which should bring my sad rectum to better feelings ...

This show is closely linked to the third novel by Damien Luce:  La Fille Debussy, which will be published in early 2014 by Editions Heloise d'Ormesson.   March 25, 1918, while the German bombs fall on Paris, Claude Debussy breathes his last breath. Mankind loses a great composer, and little Chouchou loses a Dad. July 14, 1919, Chouchou disappears as well.   During the sixteen months of mourning, she writes in her diary. Budding pianist, Chouchou signs a pact with herself: every week, she will learn a piano piece by her father, while secretly planing her escape with a young boy from St. Jean de Luz.   This book is intended to be the epitaph of a little girl, whose name is not even written on a gravestone, and who was the joy of a musical genius.

Your donations will be used to pay for the rental of the Théâtre des Variétés.