Help us provide the children of Kefrenbel with centres that can be their safe place, where they can play and build their resilience 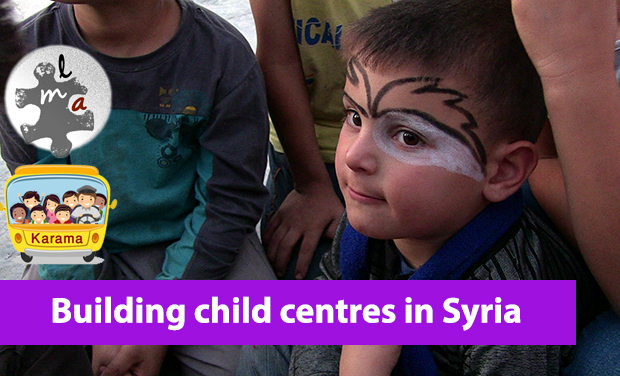 The starting point of the project is the meeting between Ranwa Stephan, president of the French NGO  de Le Monde Autrement, and Hassan Ahmad and Feras Omar, directors of Bas El Karameh, an organization based in Kerfrenbel devoted to child care.

The city of Kefrenbel is in the Idlib province in Northen Syria. This area is under the control of the Free Syrian Army today. Bachar Al Assad regime left the city for good on the 8th of August 2012.

Around 35.000 inhabitants live in Kefrenbel. And we can consider that children under 15 represent 35% of the population, so we are talking of more than 11.000 children.

Since the official army left, the city underwent numerous bombings and fighters fly above the city almost every day, putting the children in a difficult situation of constant tension with their very specific sound.

There is the immediate trauma due to the conflict, but there is also the trauma of dictatorship which conditioned the whole Syrian population for 40 years and which led to a kind of fracture of the individual personality.

Today, rebuilding Syrian society is one of the major challenges the country has to face. And it necessarily goes through rebuilding the individual personality from childhood: learning free expression, interaction and confidence into the others in order to correct the personality damages inherited from dictatorship.

Our aim is to open spaces dedicated to the children that can be their safe place, where they can play and where we can help them build their skills and their resilience. The idea is not only to offer fun activities in a war context but also to contribute to their psychological development.

The city of Kefrenbel is divided into 5 majors areas: Jouni, Gharbiye, Aziziye, Al Wata, Al Ksariah. We want to open one centre in each of these areas before november 2015. Today, a centre is already running in Al Wata district.

The strategy of our work with the children

Kefrenbel is a rather traditionnal city. Men and women interact very little, specially since the beginning of the war. At first, we have opened the activities to groups mixing boys and girls. But quickly, we realized it was not such a good idea. Some parents deprived access to the centres to their children. So now, we have adopted a new strategy: children groups are not mixed anymore but the working team is. We can give an example of gender mixing to the children through the adult they are in constant contact with. For us, it is an important reference for the children. We are also offering irregular activities that boys and girls attend together. Little by little, gender mix is progressively accepted. It allows children to learn how to interact with the opposite sex. Intergender interaction is normalized at a rhythm their environment can accept.

Thanks to our partnership with the NGO War Child International, we were trained to the "I Deal" method. The purpose of this method is to help the children, through games and group discussion, to build their resilience and increase their ability to deal with their difficulties on a daily basis. The intervention is made up of 6 themes addressed in 6 modules.

Who am I? What are the difficulties I have to face? What do I want to overcome? The idea is to help the child to develop a clear sense of 'self', his ability for introspection and his capacity of finding solutions.

What are my emotions and why do I feel them? Understanding one's emotion is a crucial step for the a child so that he (or her) can master them and identify what is good or bad for him (or her).

What are the relationships I have with my peers? How can I handle conflict or help a friend? In this module, the child learns to understand his relationship to the others and how to end a conflict in a peaceful way.

Who are the adults around me that helps me grow up or on the contrary are unable to understand me? The child relationship to adults is a major key of his development. It gives him references, encouragements and protection. But with some adults, this relationship can be difficult. In this module, the child learns to identify the situations difficult for him and to understand them.

What are the conflits I enconter in my daily life? How can I identify an inner conflict between emotions? How can I mesure the degree of conflict with someone else? In life, conflicts are constant, between people or between emotions. And if they are dealt with in a constructive way, they can force us to change and evolve.

What do I want for my life? How to build on what I have learned? What are my dreams? Through these issues, the child learns to project himself into the future. This module also aims at showing the child that future is not necessarily far away, but can be foreseeable.

We will use the funding to open a second center in Kefrenbel in the Azizye area. We have already found the place. It is an open space of 350 square meters. A 5 people team have been gathered, have been trained to the "I Deal" method and is ready to start the activities. Once we have gathered the budget we need, we can open the center within a week.

The provisonnal budget needed to open the center is 9.333 €. Thanks to private donations and a grant from the URB of Kefrenbel, a kind a city council, we have already gathered 4.334 €. We still need to find 5.000 € so that 400 additional children can benefit from Bas El Karameh's activities.

The budget is needed for the following items:

Electricity is only available few hours a day, and sometimes not at all. We have to have a generator and install lights working on batteries so that children never find themselves in the dark.

In case we can manage to gather more then 5.000 € thanks to you, we will use the money to help the center in Al Wata area to keep functionning. The budget we need to maintain the activities in confortable conditions is  2.359 € a month.

Our deep, warn, and sincere thanks by mail.

Your name as a benefactor on our website, in addition to our thanks by mail.

Pictures of the new centre sent to you by email, in addition to your name on our website, and our thanks by mail.

Three recipies (starter - main course - dessert) for a typical Syrian meal, in addition to the pictures of the new center, your name on our website, and our thanks by mail.

A signed drawing made by one the children, in addition to the 3 recipies for a Syrian meal, the pictures of the new center, your name on our website, and our thanks by mail.

The 30x40 cm print of the Kefrenbel picture of your choice, in addition to the signed drawing of one of the children, the three recipies for a Syrian meal, the pictures of the new center, your name on our website, and our thanks by mail.

A signed DVD of the film "The Fly" by Ranwa Stephan (shot in Kefrenbel), in addition to the print of a Kefrenbel picture, the signed drawing of one of the children, the three recipies for a Syrian meal, the pictures of the new center, your name on our website, and our thanks by mail.