French countryside, 1975. A family is about to dinner... they do not know yet that the Great Purge is about to begin. 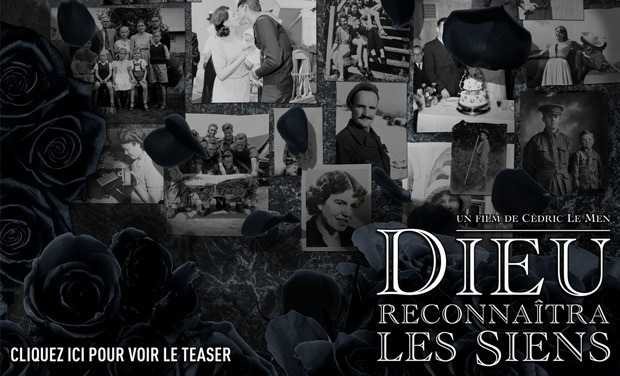 We plan on subtitling the film in english for the DVD realease.

More visuals on our Tumblr and our Facebook page.

An evening in august 1975. In an isolated house, somewhere in the french countryside, a couple and their two children are going about their own business. Nothing peculiar, apart from the fever that the youngest daughter is suffering from. But the radio is now broadcasting an alarming message: the dead have risen from the grave and walk among the living, a threat that must be eradicated withour delay.

Seven anonymous figures surround the house, intending to break in. The mother and her two daughters go and hide in the cellar, while the father tries to repel the intruders. The father is able to sustain massive injuries, for he is one of the living-dead, and proves very hard to kill but is ultimately defeated by superior numbers.

In the cellar, the youngest child starts to breathe again and regains clear-headedness. She is coming back to the realm of the living. Her fearful scream, when she sees her living-dead mother and sister, gives away their hiding place to the human mob. Their leader, a priest, stares at the little girl: Although he understands that she is alive and well, he gives the order to kill the three of them and “Let God sort them out”.

After carrying out the execution, the whole group of “hunters” take a picture of themselves in front of the family’s corpses. A reminder, for posterity’s sake, of the Great Purge of 1975.

Let God sort them out is a short horror/fantasy film playing with the conventions commonly found in zombie movies. The action takes place in a countryside house, in the august of 1975. A quiet family, while preparing for dinner, is attacked by unidentified enemies, shadows lurking around the house. The father, taken by surprise, does his best to defend his own but is overwhelmed by the “hunters”. We understand in the process that the whole family is a living-dead one, under attack by the living that have come to purify them and the land.

My general idea is to divert from the genre’s tradition – humans attacked by dead people – and invert it in order to insist on the violent nature of men. In a similar way, the priest character is an archetype, and symbolizes the influence of religion in human behavior: in a world overcome by the dead, the distressed people turn towards religion and the holy, as an ultimate hope for salvation. The priest becomes a natural figure of authority: he is the cleric, the latin curatus animarum, "curator of souls".

My interest in this project lies in that inversion of values and codes. The living-dead figure has been watered-down through the massive output of zombie (or “infected”) flicks by a film industry always fond of taking the path of least resistance: zombies are cheap and easy to produce, not very talkative, quite inexpressive, and as the long as the special effects make-up artist does a good job, can be shot with no great remorse or afterthought. Other classic horror creatures, like vampires and werewolves, tends to be far more delicate beasts, and demand a huge writing and directing effort, especially in low-budget productions. Inverting the convention allows us to see zombies under a fresh angle, and to reflect and reclaim this monster.

Besides that aspect, I really enjoy the analogy that the script demonstrates with past and present religious conflicts, introduced through the priest character. What seemed like a random “hunt” turns out to be a meticulous purge, un autodafé, even though the only character to really grasp that aspect is the priest himself. The quote “Kill them all, and let God sort them out”, which gives the film its title, was uttered by Arnaud Amaury, abbot of Citeaux, during the Albigensian crusade and the 1209 Béziers massacre. As often in the history of France, religious and political motives coincided in this historical event, something we illustrate in the final sequence of the film that will take place in a mausoleum.

In a more subtle way, we would like to represent the social opposition between the “inquisitors” and their victims. On one hand, a group of countrymen and farmers, led by a priest; on the other, a comfortable and educated family, though not notably wealthy. A situation which echoes the social disruption of the mid-70s France and that will be translated on screen by the choices of wardrobe and props : the hunters wear bright-colored dungarees, hunting jackets and trousers, axe and fork in hand. The family wear well fitted, more elegant garments in neutral colours.

Both in its visual and narrative, the movie revolves around two movements. The first one, that exposes the quiet life of the family and runs until the first signs of hostility, will be composed of clean, precise, sophisticated shots, in order to convey the impression of strangeness that emerges from the house and the family. The second movement is more action-oriented and will be based on hand-held, still very clear but much more dynamic shots: it will express the urgency and the danger of the struggle waged by the father against his opponents.

The lighting will have to emphasize the ambiguity of the characters, and will use a range of ochre, woody, brown and grey tones to keep the uncertainty around the true nature of the family, and dull the difference of complexion between them and the hunters.

For the same reason, the physical aspect of the living-dead will differ from the one portrayed by George A. Romero and will force a new and uncommon, realistic and subtle, "medical" vision of the figure.

All those reasons explains why I find this project very appealing, subtle and clever. As a movie director and a zombie fan, I want to give the audience something different from what has been seen countless times already. Horrific and fantastic plots are first and foremost a way to carry a story and a message: History and religious texts are full of allegories, parables and fables whose sole purpose is to give an interpretation of reality. This is exactly what I intend to do with Let God sort them out.

An extract of the storyboard can be read here :

"Let God sort Them out" storyboard by François Vataux

Born into a musician family, Cédric was the founder in 1995 of Zahori, a band he was part of for a decade, before specializing as a film director by studying in the ESRA Paris film school. There, he signs two short-features films, for which he also compose part of the music soundtrack, Kaeron and Lacrimosa. Upon graduation, he directs several music videos and live concerts recording produced by his own company created in 2008, Camisole. He is currently working on several music and photographic projects, while also being chief editor for cultural website Ça Dépend des Jours.

A preview of the film poster.

It will be one of the rewards for backers, see right column for details.

Once our fundraising is complete, we plan on shooting the movie at the end of June / in the beginning of July. It would then be edited and post-produced during summer for a finalization in September 2013.

Rewards would be sent after finalization, as we need the completed movie for the DVD or the premiere.

The movie is to be shot with professional equipments and devices : the money raised will allow us to rent a RED Scalet-X and its accessories for the 6 days of shoot : 5 days on the main location and one day for the final sequence. We also included the rental of a generator that we need outdoors.

"Let God sort Them out" deals with a fictional event the 1975 Great Purge: Thus we have to find matching locations and clothes for the time period. The main set is an house from the early Xxth century with both wood and formica dominated rooms. The final mausoleum sequence will be shot in one of the former forts of the second defense ring around Paris which has everything we are looking for : it is cold, administrative, escheated and monumental. This movie requires quality, soulful sets and costumes and that is the reason why we are putting such an important part of our budget in it.

As an horror/fantasy film, "Let God sort Them out" has its fair share of special effects, all the more since we are striving for something original and subtle for the physical appearance of the family (skin tone, eyes...) taking account for their decay throughout the film : SFX make-up will be done by David Scherer, one of the foremost artist in the french film industry whose talent will help us reach our intent.

We also have a working rifle : the firearm will be supervised by pyrotechnist Léo Leroyer. We want our SFX, both the make-up and firearms shots, to be done completely on set to enhance their impact and enhance the film coherence, hence why we need to have specialists.

Digital technologies have eased considerably movie post-production. However some steps still requires dedicated devices and the use of providers: Color grading is one of them, and we currently estimate we will need 2 days for this operation. Then we must also order a DCP (the copy for digital projectors) with english subtitles. As our goal is to show ''Let God sort Them out'' in festivals and movie theaters, both steps are essential for our production.

Your name will appear in the end credits.

You will have access to an online downloadable portfolio of pictures from the movie set. + all previous rewards.

You will get a link to download the HD version of “Let God sort Them out”. + all previous rewards.

You will receive a small poster (21x29,7cm) of “Let God sort Them out”, signed by the movie crew. + all previous rewards.

You will receive a DVD of “Let God sort Them out”. + all previous rewards.

You will receive the large poster (80x60cm) of “Let God sort Them out”. + all previous rewards.

You will receive the movie script (in french) of “Let God sort Them out”, signed by the director and the writers. + all previous rewards

You will receive the film storyboard (in french) of “Let God sort Them out”, signed by the director and the storyboarder. + all previous rewards

You are invited to a premiere screening of the film in a movie theater in France. + all previous rewards

You can come for a day on the shoot of “Let God sort Them out” + all previous rewards.

You will receive the film clapperboard + all previous rewards.