To work as "Fans Assistants" for an important concert (+ 5000 people) to present our new service and attract clients. 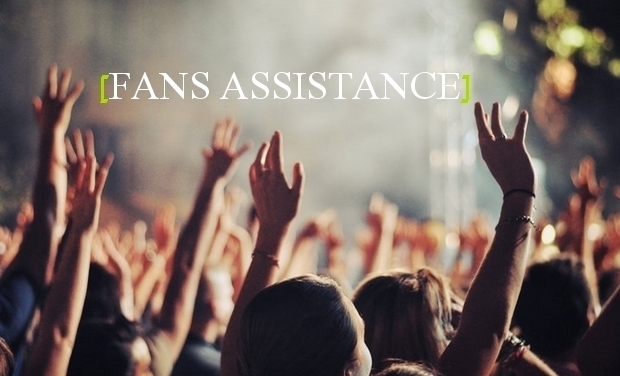 Created in July 2013, "Fans Assistance" is a a new and innovative service dedicated to the assistance of fans before concerts begin in France.

Our aim is to ensure that all goes well for fans while they are waiting outside concert halls.

We operate in various fields:

In France, before concerts begin, hundreds of fans come early in the morning to be near the stage once in the concert hall.

For us, it is truly important to take care of fans by avoiding faiting due to tiredness and emotion. That is why our team guarantees a real support. We stay at their disposal during this day that has to be fabulous from A to Z by ensuring access to water bottles and insulation blankets if needed.

200 water bottles of 33 cl are provided for each concert we will work for. These bottles will be provided by our sponsor, "Cristaline" the number one brand on the water bottle market in France.

Our second mission is to interact with fans! The day spent outside the concert hall can be long, VERY long for all these persons that are waiting for one thing: Seeing their favorite artist performing live and to approach him.

This is why we create different activites for fans:

- We film and interview fans about the upcoming concert to see their excitement and make them sing songs. Videos will be sent no later than two weeks after the concert.

Fans with the numbers appearing in the envelope could win a meet and greet or an access to the soundcheck of the artist.

Winning fans will have to come to us to prove that they have won. We will accompany winners to the concert hall access to ensure their safety.

It is very important for artists to keep their fan base strong, this is why fans should be thanked for their continuous support.

This is why, us, fans assistants had the idea of creating a "Thank You" letter for fans. This letter will be written by the artist and provided to us by his management company. We will put this letter on flyers. We will print flyers corresponding to the capacity of the concert hall in which the artist will be performing.

This past August,24th, we obtain the agreement of a concert hall based in Paris called "Le Zénith de Paris" for "Fans assistants" to work for them. Now, we have to convince concerts producers and artists management companies to hire us for concerts.

We would like to work in Angers (Where we are from), Nantes, Tour, Le Mans, Rennes and Paris.

We wish to prove that this concept answers to a real need from fans: Here is a french article explaining how bad the conditions can be for fans:  http://www.metronews.fr/people/concert-de-madonna-une-interminable-attente-pour-45-minutes-de-show/mlgA!Kll9N0vQIq8A2/). We also saw it by ourselves during several concerts between 2009 and 2012.

Our service is novating and competely new, this is why we need to build our base of clients and above all, prove that we truly work professionaly. This is why we want to work for free for a concert.

We hope to work for one of WILL.I.AM concert that will happen:

- In "Le Zénith de Paris" as we have the agreement of the concert hall. The concert is planned for December, 1st.

- In "Le Zénith de Nantes" because we have contacts with WILL.I.AM management and with the french society who is producing his concerts in France.

We are more interested about this last date as we will have more time to organize everything. Here is a plan of the concert hall where we will put each flyer:

We are introducing our concept to you, investissors, passionate of music, to ask for your generosity and support regarding "Fans Assistance".

We are 5 students passionate about events, music but most important, by innovating. We are aged between 19 and 25 years old. We developp this concept while studying. We are completly passionate about our concept and believe in it at 2000%. We are proud of it, extremely motivated and determined to make of it a success.

We just hope that this concept will attract your interest.

Here is a little resume regarding each of us:

Laure began to organize fans events for concerts in "Le Zénith de Paris" for 2,500 people and in "Paris Bercy" for 15,000 people when she was 16. This is how the concept of "Fans Assistance" came to her mind. Since August 2012, she works as an A&R scout for the artist management company "SugarNova" based in London. She is studying management of business units. She also helps independent artists in the pop, rnb, hip hop and electronic genres by contacting festivals, clubs and record labels.

In 2009, Veronica was a host for a leisure cener and was a hostess at the "International Documentary Film" in Sibiu, In Romania. Having travelled in Europe and in the USA, Veronica speaks English, French, Russian and Romanian. She has a great contact and wishes to evoluate in the events industry at an international level. She is currently studying for a degree master to become a trilingual negociator in the international commerce.

Passionate about music, she felt in this industry in her younger age. Having eclectic musical tastes, she has very good cultural knowledges and took part in many festivals. Moreover, she had access to behind the scenes during concerts. In June 2013, she did an internship at the "Theatre de Thouars". Extremely interested by the events industry, she hopes to own one day a concert hall.

Jordan has been studying biology for two years at "L'université catholique de l'Ouest" in Angers. Besides of his studies, he works in a commerce of coffee roasting. Ambitious, hardworking and bold, he is on a continuous lookout for opportunities that will allow him to work on innovative projects. Wishing to cultivate his skills and having a lot of interest for organizing events, he is determined to make of this concept a real success.

Extremely interested by organizing events, in 2009, Adelaid set up an online petition for the artist Selena Gomez to come performing in France. More than 4000 people signed this petition and later the same year, Selena Gomez booked a concert in Paris. Adelaide also did street marketing and was an hostess for companies such as "Europe 1", one of the most important radio in France. She is also a volunteer at the charitable foundation "Les Restos du Coeur" in Angers.

Do not hesitate to take a look at our website:

For all questions, do not hesitate to contact us at : fansassistance@hotmail.fr

From each of us, ONE MILLION THANK YOU TO ALL OF YOU THAT WILL INVEST IN OUR PROJECT!

The collect will allow us to work for a concert without the need of being paid by the society producing the concert of the artist and its management company.

We will perceive no salary from this event. The costs relate to materials and to logistic aspect of our project. We want to work for free for a concert to demonstrate that our service is very useful. We will reap the testimony of fans in concert to promote the attraction of potential customers to our concept. At the concert, fans will call us by our names as it will be written on our t-shirts:

We also planned to contact journalists and newspapers to present our service. That way, we wil promote "Fans Assistance" and attract other clients.