Good Chance creates new kinds of communities to empower artists from across the world and connect people, stories and cultures. 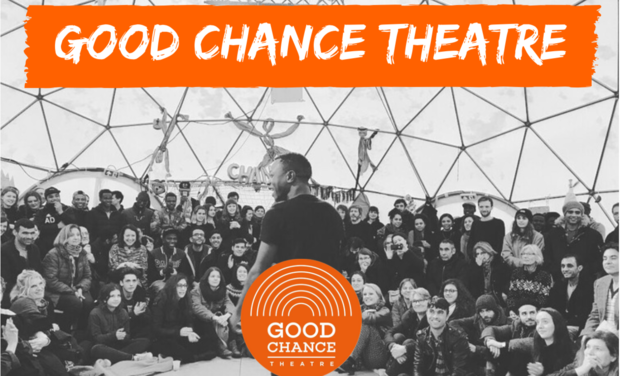 Good Chance builds Domes,‘theatres of hope’, promoting freedom of expression, creativity and dignity for all, empowering artists from across the world and connecting people, stories and cultures. The Good Chance Domes are a space for refugees, migrants, artists and local Parisians to come together, creating new kinds of communities through theatre, music, dance, puppetry, film, art and so much more.

Good Chance Theatre built the first Domes in 2015 in the heart of the Calais Jungle, at the peak of the European migration crisis: according to the UNHCR, 6.6 million refugees have fled to Europe since 2015.

Following Calais we brought the Domes to Paris; first in Porte D’Aubervilliers at the start of 2017, followed by Théâtre de la Ville in spring 2017. In spring 2018 the Domes moved to Porte de la Chapelle, and then onto the Emergency Housing Centre Jean Quarré in summer 2018. We are now settled in the National Museum of the History of Immigration.

Each week we host artistic workshops with refugees and local artists from multifarious backgrounds, culminating in a weekly ‘Hope Show’.

Omar (member of "La Troupe"), during a "Hope Show" at the Jean Quarré Emmaüs Solidarité centre

Good Chance Theatre is a kaleidoscope of theatre activities for refugees and Parisians, giving hope and community to all. Every Saturday, we open our doors to the public– refugees, migrants, artists, volunteers, Parisians – for the ‘Hope Show’, a spectacle built out of the weekly workshops. The programme is open to the unexpected and to each and everyone’s personal talents and cultures.

Rehearsal before a "Hope Show".

Good Chance Theatre’s art and theatre workshops in Paris favour the social integration of vulnerable populations, thanks to the active participation of artists, citizens and associations, collaborating with us on a daily basis.

In March 2018, we  met many talented people from across the world; people who were tailors, designers, costumes makers in their home country. We then created the ‘Hope Walk’, a fashion show produced with the help of students and designers from the International Fashion Academy of Paris (IFA). As a direct result of this, IFA opened its doors to a group of ten refugees, for them to attend classes on a scholarship with the aim of obtaining a diploma in Fashion Design.

Pape, who was a tailor in his home country, is creating a piece for the Fashion Show "Hope Walk"

““La Troupe” was created after participants shared their desire to intensify their artistic practice and to professionally set up an original play. It premiered in La Générale on 9 October 2018.

The goal of the fundraising campaign is to support our winter 2018/2019 project in Paris in 3 ways:

Thanks to your help we will be able to maintain an ambitious artistic programme, celebrating diversity, unity and solidarity.

It would be a real gesture of trust and support if you were to help us reach the 10 000€ goal.

And in case we go beyond our goal...

We will invest all of the money collected to develop « La Troupe »’s work and to be able to showcase it on various stages in France and all over Europe.

Our promise to supporters:

Good Chance relies on the generosity of our supporters. We are so grateful for your support and promise that we will:

In the meantime, you can find Good Chance Theatre at the Musée National de l’Histoire de l’Immigration in Paris, until 17th November, as part of the artistic season « Welcome ».Opening hours :

Carefully ensure that your donations are used in an efficient and impactful manner, for the communities that we wish to help.

Keep you informed regarding the way your donations have been used.

Be open to dialogue with you.