Get involved in the creation of a web-TV series with funny and quirky humor and explore the wonderous, hidden backstage of a theater. 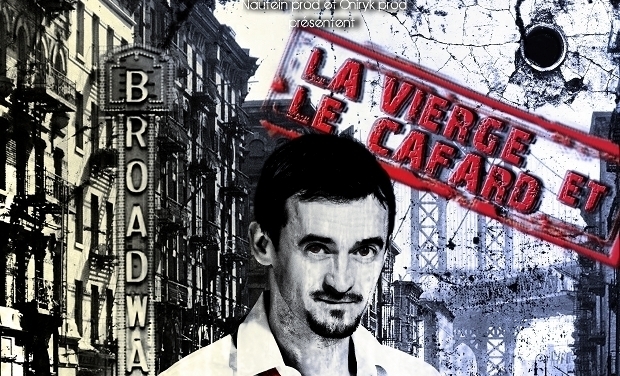 'The Virgin and the Cockroach' is a creation from the artist collective 'Les Cour Jets', produced by NAUTEIN Prod, ONIRYK Prod and IMPROV' Productions.

In a small Parisian theatre, the most improbable theater company defends the most indefensible play: 'The Virgin and the Cockroach'. Their desire: to become world famous. However incredible this goal may appear to be, it will take twelve months to achieve it. The question on the tip of our tongue is 'how?' Every episode follows one month of an uphill struggle towards glory, punctuated by an avalanche of disasters and explosive, funny events. This is a riotous series with refreshingly upbeat humor and fiendishly absurd brought to you by the leguminous 'Cour Jets' team.

If the atmosphere of this series is at the very least offset, the series is created in a style that is resolutely realistic to the proceedings inside a theatre. It plunges the audience into the heart of the excitement of dressing rooms as one would find at a theatre company. The action is shot with a handheld camera. The plans follow one another at a frenetic pace, meandering in space and time, alternating between the reactions of the theatre audience and the life of the dressing rooms – the whole narrative being punctuated with nonstop flashbacks. The result is a colored canvas of live performance, which challenges the codes of French comedy by incorporating cross-Channel and cross-Atlantic influences ('The Office', Ricky Gervais...).

'Les Cour Jets' is a collective of artists created in 2011 at the theater 'La Reine Blanche'. It is composed of:

We have already created two funny web fictions in 2012:

which were ranked nº1 by the website meswebseries.fr in 2012.

We have planned for 24 days of shooting. The artistic and technical team on this project are all volunteers. This does not take away from our extremely professional vision, the purpose of which is to offer the viewers an unprecedented and high-quality rendition of episodes. Our goal is to submit our project to festivals and appeal to channels to broadcast on television.

The collected donations will essentially help meet the expenses for costumes and props, which are tremendous in every episode.

It is important to note that shooting on location was for the most part kindly loaned to us, which considerably reduced our budget.

Additionally, the donations will also be used towards post-production tasks such in order to improve the graphic design and sell the project.

The budget is broken down as follows:

a special thanks on our facebook page + your name in the credits of the first two episodes.

all previously mentioned rewards + 'The Virgin and the Cockroach' series poster wallpaper + a signed photo by your favorite character!

all previously mentioned rewards + an original prop from the show or belonging to your favorite character + autographed zucchini by 'Les Cour Jets'!

all previously mentioned rewards + meet 'Les Cour Jets' and attend to a show of your choice at the theater 'La Reine Blanche' in Paris!

all previously mentioned rewards + share a dinner and a bottle of champagne with the team + your name in the credits of all episodes !