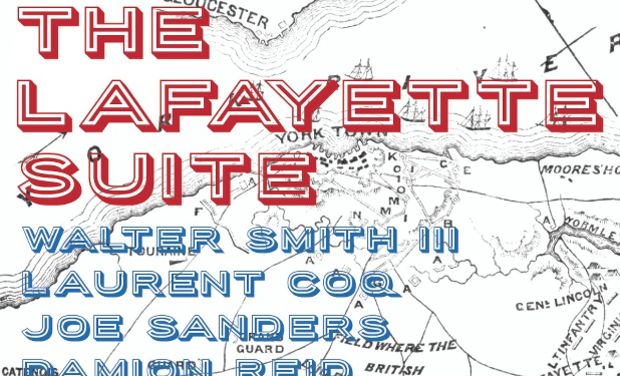 The Lafayette Suite is French piano player Laurent Coq’s new album, co-signed with American saxophonist Walter Smith III. It was recorded in New York in September 2014 with a quartet featuring Joe Sanders on acoustic and electric basses and drummer Damion Reid, two musicians Laurent is familiar with since they were already featured in his 2008 album Eight Fragments of Summer (88Trees). Damion was also the drummer on Laurent’s 2003 quartet record (Like a Tree in the City, Sunnyside/88Trees).

“If the French jazz scene is exciting today, it’s due in good part to piano player Laurent Coq” according to Télérama, which praises the pianist’s creativity, his striking originality as a composer, as well as the rigor and inspiration of his improvising. A sideman with saxophonists Julien Lourau and Pierrick Pedron or singer Elisabeth Kontomanou in the past, Laurent Coq co-lead the project “Rayuela” with alto player Miguel Zenon, and recorded several trio and quartet albums under his own name, garnering much praise from reviewers.

Joe Sanders is without a doubt one of the most in-demand young bass player of the current New York jazz scene. He plays in Gerald Clayton’s trio and is now part of Charles Lloyd’s new quartet along with Gerald and Eric Harland.

Damion Reid is an emblematic drummer of his generation. He has been part of piano player Robert Glasper’s trio back in the 2000s, a trio that just reunited, and also plays today in acclaimed saxophonist Steve Lehman’s trio.

For this new collaboration, Laurent Coq invited Californian saxophonist Walter Smith III, a regular member in the bands of trumpeter Ambrose Akinmusire and drummer Eric Harland, to work around the historic figure of the Marquis de Lafayette.

Lafayette was a young aristocrat who left France in 1777 at only nineteen years old to fight alongside the American Insurgents against the British. This extraordinary adventure serves as inspiration for the ten chapters suite that Laurent and Walter co-wrote, each musician writing half of the songs.

Through his rare commitment, Lafayette embodies the audacity and the capacity to dive into the unknown - qualities that jazz musicians have always strived to develop - and he symbolizes better than anybody else the friendship between France and America.

This project received the support of the prestigious FAJE (French American Jazz Exchange, financed by the Mid-Atlantic Arts Foundation and the French Institute), a program that aims to encourage collaborations between French and American musicians.

This support allowed the musicians the means and time to develop and refine an entirely new body of work over the course of a full year. It was necessary for the music to become fluid and natural, and for the band, once in the recording studio, to in turn be as audacious and daring as its inspiration model.

MORE ABOUT THE ALBUM

The inspiring nature of the material and the constant commitment of all four musicians is evident in the album, a non-stop suite that evokes Lafayette’s commitment to freedom from the moment he becomes aware of the cause of the American Insurgents up until the final battle of Yorktown which sealed the fate of the Independence of the United States.

7. The Battle of the Brandywine

At this time, the album is recorded, mixed and mastered. However, one final step needs to happen before this music sees the light. For that, we need your support.

Put together by jazz journalist and exhibition curator Vincent Bessières, jazz&people is a breeding ground label that fosters projects by creative musicians and helps them grow through crowdfunding campaigns. This responsible approach favors a direct relationship between the artists and those who listen to them. This is the reason why we call upon your generosity.

Your donations will pay for ;

- launching the album with the help of a publicist

What will happen if we get more than 5 500,00 euros at the end of this campaign ? Then we will have more means to better promote this music and make it more visible/audible.

An ensemble of rewards will allow you to help us achieve our goal according to your budget, from advance download of the music to a private concert of Laurent Coq’s Dialogue trio with guitarist Ralph Lavital and singer Nicolas Pelage, or different packages of CDs pairing the Lafayette Suite with Laurent’s past albums.

In advance, we sincerely thank you for your interest and most of all, for your support.

Advance copy of the physical album in your mail box.

Advance signed copy of the physical album in your mail box.

Advance signed copy of the physical CD + HD digital download "Studio Masters" 24 bits (non-compressed audio files, better sounding than the CD) + piano solo private concert by Laurent Coq (this does not include the eventual costs for piano rental, venue and transportation for the artist) + your name credited in the booklet.

Advance signed copy of the physical CD + HD digital download "Studio Masters" 24 bits (non-compressed audio files, better sounding than the CD) + a private concert of the Dialogue Trio, with Laurent Coq, guitar player Ralph Lavital, singer Nicolas Pelage (this does not include the eventual costs for piano rental, venue and transportation for the artists) + your name credited in the booklet.