After our first shooting, Leucosie wanted to disclose her inspirations and the way she works in order to bring Charlotte's character to life.
"I had written a little about that during the Paris 1900 newsletter, but I wanted to focus a little more on the second step of my assignment.
Creative process :
When my intensive research phase is over, I then have to select, file and organize all the data I found in the various exhibitions and movies I have seen...
My task for the Lady Marmelade project is a little different than what I usually have to do. Indeed, until now, everytime I had to create make-ups or hairdos was for costume makers campaigns or stylists. I had to conceive one only look for one model, for a unique photoshoot in quite a short time of reflexion.
For our project, the challenge is to create ten different styles while keeping a given cohesion between them, and harmonize them with Clara's costumes while respecting Chimère's universe.
To do so, I documented myself both on traditional costumes from the 19th century in the various countries visited by Charlotte, inspiring myself from paintings and fashion engravings... I also watched a lot of modern movies just to get a global vision of what remains in the collective psyche about those times. Once I've accumulated enough data and feel a little more enlightened about my artistic direction, I start to file the various data in big moodboards, pinning and gluing, the most inspiring images. For Lady Marmelade, we therefore have 10 moodboards, one for each country where the action is set.
Great-Britain moodbard : 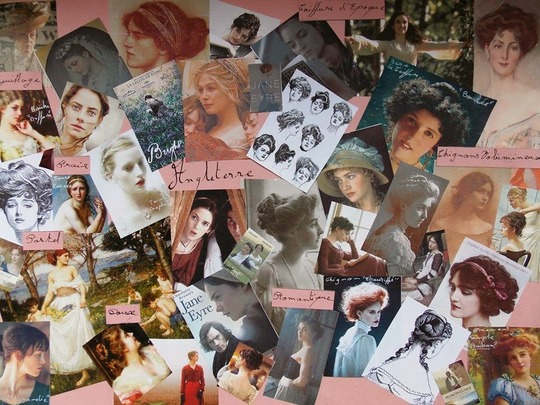 " It is the country the story starts in. It also represents the first rebellious move from the well-raised Charlotte, away from the parental authority.
To translate those wealthy families atmosphere, I found a lot of influences in the BBC adaptations of Jane Austen, drawing from her heroins. I also looked into Pre-Raphaelite Brotherhood as John Everett Millais, Lawrence Alma-Tadema or John William Waterhouse...
At last but not least, I documented myself about 19th century hairdos in old fashion leaflets that can be found on the Internet. I was going for a bun but I wanted it to reflect the British etiquette our main character is subjected to."
Soon we'll disclose a second moodboard ! We hope you enjoyed this one !
Tweet