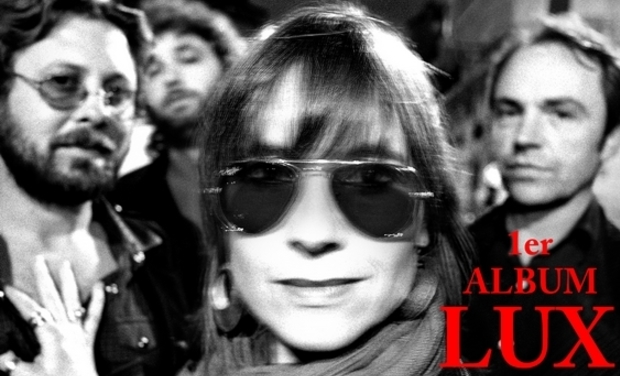 WOW !!! You guys are radical !!! and because of your incredible investment, as of today, we have shot to over 7,000 € for the recording of LUX's first album. THANK YOU !!! This sum will take up half of the recording costs !!

The clock is ticking but with a push for participation and with your help spreading the word we can go just that much farther which would allow us to ensure the post-recording costs from pressing to publicizing whether that be a music video and/or the help of a PR person - essential elements in the promotion of a first album.

For those of you who are yet to meet LUX, here is our story:

We are LUX, an Alt-folk/rock group playing music that we call  “Velvet Rock”.

This summer we will be recording our first album, which is why we are turning to you in hopes that you will be interested in participating in this next critical stage.

THE MUSIC: Sylvain Laforge: Co-founder and composer for LUX, Sylvain is a highly regarded and well-known French guitarist who played most notably with the Rita Mitsouko and Catherine Ringer from 2006 – 2010.

THE WORDS: Angela Randall: Co-founder of LUX and American singer and writer for LUX who is a native New Yorker.

On stage and in the studio:

THE BASS: Julien Boisseau, bass player for LUX as well as for blues/rock group Jesus Volt and the Southern Rockers of Plug & Play.

THE DRUMS: Franck Ballier, drummer for LUX who has accompanied bands in all the major venues in France.

As LUX, we released our first 5 track EP in June of 2014 with the single “No New Love Yet Please”.  This small sampler brought us some great reviews, web-radio play and concerts – such as opening at La Boule Noire and the New Morning in Paris, which allowed us to take the first step in establishing the 4some on stage.

We are incredibly excited about the album, which will reflect the years of “behind-the-scenes” preparation, and we are particularly thrilled to announce that Peter Deimel who was already behind the sound of the EP will be taking on the role of Artistic Director for this debut album that we will be recording at his Black Box Studio in Angers, France.

WHY CONTRIBUTE TO THIS PROJECT?

LUX is an up-and-coming group but equally a long-term project that has carefully prepared this moment.

With the help of  Peter Deimel 12 songs have been selected from the 50 that we have already written and demoed – which means that we are ready to record this first album and more!

LUX is an atypical rock band, an international group with true legitimacy in English.

Our music hails from a blues/rock/folk tradition, which is timeless.

For us, the most important thing is this; have a listen, take a look and if our music speaks to you we want YOU specifically to take this journey with us – for this first album and for the songs and concerts that will follow.

TO LISTEN TO THE SONGS: Link to the LUX EP

A SPONSOR OF THE ARTS:

Today individuals can make a HUGE difference in the music that is made. By participating and getting others in your own circle involved you will be part of a long tradition of patronage of the arts.

Think about it; what would Florence look like without Lorenzo de Medici? The Impressionists without some forward thinking dealers? Think of the great American and European artists who came to light thanks to Peggy Guggenheim. Art has always been reliant on patrons such as you!

To understand LUX, we need a moment to tell you how this Franco/American adventure got started.

Paris and New York have long been connected through the arts and LUX is part of this trans-Atlantic conversation that has been going on for centuries.

The starting point for LUX was the chance meeting between a musician who had music waiting for words and another who had so many words just waiting for music.

Writing songs led to playing local gigs in Paris – initially as an acoustic duo - before pulling in Julien on bass and Franck on drums to record the first EP.

In truth, the actual cost of an album goes beyond just the recording in a professional studio with sound engineer and producer. Recording in an analog studio with the set-up to record live is expensive but there are other costs for a self-produced project: mastering of the album, cost of a graphic artist for the album, pressing of the CD and vinyl, music video for the single, help with press and promotion.  Rest assured, LUX has been working the whole time to finance the project too.

It is YOUR contribution, YOUR participation that will help us to make the album in one of the best recording studios in the world and bring these years of work to fruition.

The idea is simple: the totality of your contributions will be used to develop this project. Once we have the album in hand, there will be many more steps  to take in terms of marketing, promotion and diffusing the songs themselves. Artists may create but without your support their creation remains silent and unseen.

Our objective it your PARTICIPATION which will allow us to take you with us on an unforgettable journey and to give you beautiful songs that will endure. Every penny raised goes to the album  to ensure that every element from the sound to the images are carefully looked after.

To give you an idea of cost:

An album is a great thing. It is art. There is artwork, there is writing and music. In itself, it is a tiny time capsule in the life of a band. And, it makes a great gift !

End 2016: Pressing of the album and start of sending the goodies

Filming of a music video(s)

Album to be released during the 1st trimester

THANK YOU FOR LISTENING TO LUX. WE ARE DREAMERS, COME DREAM WITH US !

“It’s A Start” Welcome! You receive a personalized thank you email from the band

The LUX « Light Pack » The album via digital down-load

The LUX « Simply CD Pack » A physical copy of the album on CD (postage included) and your name in the “thank you credits” on the website.

The LUX “CD Forever Pack" A physical copy of the album on CD (postage included), signed and dedicated to you and/or the person of your choice and your name in the “thank you credits” on the website + a LUX badge. *For those of you who are too modern to have a cd player (not even in the car!) this pack can be done 100% digital download!

The LUX “HeadLights Pack" A physical copy of the album on CD (signed and dedicated) AND a digital download of the EP (5 tracks) + your name in the “thank you credits” on the website + a LUX badge. *For those of you who are too modern to have a cd player (not even in the car!) this pack can be done 100% digital download!

The LUX “VIP Collector Pack” The album vinyl (limited edition) AND the CD – both signed and dedicated + your name in the “thank you credits” on the website + a LUX badge + your name on the limited edition “LUX first album” poster as well as in the liner notes *For those of you who are too modern to have a cd player (not even in the car!) this pack can be done 100% digital download!

The LUX “Picture Book Pack" = The “CD Forever” pack + the limited edition book (fully illustrated) that chronicles the story of LUX with full lyrics and explanations of the songs from the album. Your name on the limited edition “LUX first album” poster + your name in the liner notes

The LUX “Songbird Pack" = The “CD Forever” pack + physical copy of the EP (5 tracks) (limited edition) + an MP3 acoustic version of one of the songs from the album or the EP. Your name in the liner notes + your name on the limited edition “LUX first album” poster

The LUX “Guitar Hero Pack" = 100% LUX. This includes the “CD Forever Pack” + drink with the band after a concert to which you are invited (2 tickets) + a 1 hour master guitar class in Paris or via Skype for those far from Paris with Sylvain. Your name in the liner notes + your name on the limited edition LUX first album poster

The LUX “NY Brunch In Paris Pack” ou « NY In Paris Pizza Pack » = The “Cd Forever Pack" + Sunday brunch OR Sunday pizza (home made) chez LUX in Paris (for 2). Your name in the liner notes + your name on the limited edition "LUX first album" poster.

The LUX «ART Pack» = The “CD Forever Pack” + the LUX book + Visit to the art exhibition of your choice in Paris of with Sylvain and Angela followed by tea/coffee/drink (museum costs not included). Your name in the liner notes + your name on the limited edition “LUX first album” poster

The LUX “Acoustic All The Way Pack" = The “Cd Forever Pack” + a private concert (acoustic duo) in your home (travel expenses not included) and time with the founders of LUX. + A LUX badge + your name in the liner notes + your name on the limited edition “LUX first album” poster

The LUX « Undercover Pack » = The “CD Forever Pack” + an MP3 recording of LUX playing the cover of your choice + invitation to a band rehearsal (Paris)+ 2 tickets to a LUX concert of your choice + meeting the band for a drink after a concert (Paris or nearby) for 2 people. Your name in the liner notes + your name on the limited edition “LUX first album” poster

The LUX “Black Box Pack" = The “CD Forever Pack” + A day at Black Box in beautiful Angers, France at the end of the recording session at the end of August 2016 (limited to first 2) (travel expenses not included) + your name in the liner notes + your name on the limited edition “LUX first album” poster

The LUX “Electric All The Way Pack” = The “CD Forever Pack” + the EP in digital download + the whole band (electric) comes to perform at your house (expenses not included) + your name in the liner notes + your name on the limited edition “LUX first album” poster.

The LUX “Patron Of The Arts Pack” = The CD, EP, VINYL AND BOOK – all signed and dedicated. A LUX concert acoustic or electric in your home (expenses not included) + your name in the “thank you credits” on the website and in the liner notes + your name on the limited edition “LUX first album” poster + an acoustic guitar signed and dedicated to you or the person of your choice. Your name or logo on the album.