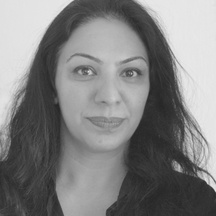 Synopsis: Elsa is a writer but she can not write anymore.  She is stuck in the illusion of an affair with a married man. The appearance of a man creates a lightbulb moment in her life.

Pousse les murs (Push the walls) is the title of a french short film with english subtitles that is to some extent a reflection of my own life. It wasn’t until I moved to France that I wanted to write a film about a subject which is banned in Iran, where I’m from. Unfortunately in my country it is not possible to speak or make films on taboo subjects like sexuality or politics because of the lack of freedom of expression. My character, Elsa, in the film, is a writer and political activist. She lives alone in Paris without any friends. Elsa has not been able to write for years. She is stuck and furthermore, lives in great solitude. The film is about individualism, narcissism and emancipation through sexuality and true love.

Katayoon Halajan is a journalist and writer. One day, out of loneliness in the summer heat of August, an idea she had in mind took shape. She called her friend Mahshid Dastgheib, an actress who studied film while playing in theater and cinema. Together, the two of them transformed the story into a scenario by infusing a dose of melancholy. Once completed, they shared it with Patrice Carré, a director, producer and cinema journalist, who added his  advice to retouch the scenario. Katayoon will perform while Mahshid will play the lead role. They have collaborated for over a year now on this project and are now reaching the threshold of achievement. Almost there! They have been able to bring together a superb ensemble which you will find in a detailed list below.

Rehearsal of a short film scene with actress Mahshid Dastgheib

We will produce this film minimalistically. But that doesn’t mean we’re leaving important details out - we are an ambitious team, with a strong desire to work together to create a quality film that we can share with the public and to present at short film festivals. That being said, we need your help to finance some essential expenses to realize the project.

Most of the budget will go towards equipment rental: light, camera, and sound to ensure a high-quality image. The other part will finance the logistics while shooting: food and travel.

We need to raise 1200 € to make this project become a reality:

If we succeed in obtaining more than the 1200 € requested we will be able to finance the following expenses: purchase of external hard drives, film editing, special effects production, music production, graphic design, poster printing, flyers, production of audiovisual media for broadcast on Instagram, Vimeo, Facebook, filming brochure and photo printing.

A big thank you, in advance! We can’t make this happen without your support!

Your name in the movie credits and a thank you email.

Free download of the shooting pictures and previous counterparties.

Free download of the movie in HD and previous counterparties.

Movie poster dedicated to you by the team and previous counterparties.

A free invitation for the first projection

A free invitation for the first projection and previous counterparties.

A souvenir brochure from the shooting with its nicest pictures and previous counterparties.

Your name as a producer in the movie credits !

Your name as a producer in the movie credits and previous counterparties.