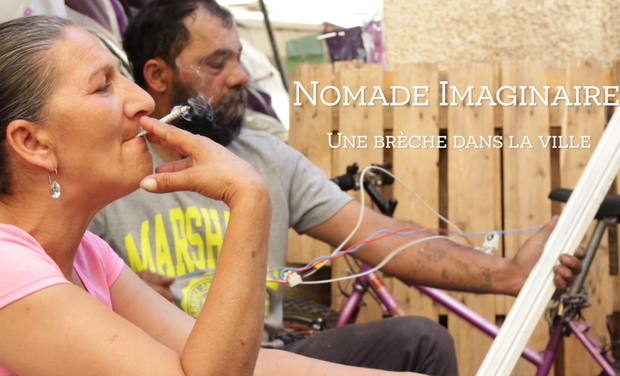 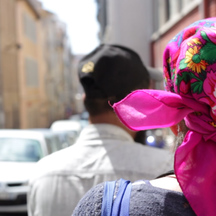 IMAGINARY NOMAD  An ode to resilience

Marseille : a city that is at once so urban and vibrant, yet also full of antagonism. Here, classes and cultures mix with the sun and the ocean, the arts of the streets, the rats and the remains. This urban mediterranean setting serves as a backdrop to the film, which aims to reflect on the stereotypes associated with Roma communities. Having migrated throughout France and western Europe, Roma people are constantly faced with the threat of expulsion from various municipal governments and have to juggle the instability of their living environment and daily discrimination. By meeting one of the families that left Romania hoping to find a better life in Marseille, Nomade Imaginaire raises questions as to what it means to " live in a place/ to live in the margins."

This observational documentary explores the daily life of Maria and Vasile, a couple living in a squat downtown (with their sons, their grandchildren and four other families). In parallel, the documentary also follows a trio of street musicians: Gedu, Nicu, and Radu. The documentary aims the viewer to see the discrepancy that exists between externally assigned identities and reality, as it is experienced by the Roma.

The camera follows the participants, their gestures and their journeys through the city, each guided by the will to survive/live. The angle of this film is anything but to complacently depict the misery of social life : neither to decry the administrative injustices these individuals have undergone nor to look upon their poverty with pity. Rather, Nomade Imaginaire seeks to demonstrate their resourcefulness and resilience. The individuals and families portrayed in this documentary have built a system of resourcefulness in the city's interstices : from the alternative economies of panhandling and collecting scrap metal to the festive dinners put together without standard access to electricity or water. This is an ode to resilience.

Nomade Imaginaire, is a tour around the city of Marseille and its lesser-known corners, told through the daily experiences of a few individuals, perceived as representatives of a despised ethnic “other”. Confined to the streets, or forced to be nomadic, the Stranger is used as the essential figure to the dichotomous construction of an imaginary “us”. Here, the camera aims to be an intermediate, to show the in-between, to serve as an eye opener to the partitions that too often separates us from each other.

Project history and Presentation of the team

This project has come to life as a result of an encounter with Romeo, one of the organisers of Latcho Divano-Tsigany cultural festival. Having participated in the making of a documentary previously, in which he was one of the protagonists, it was Romeo who encouraged me to tell the stories of some of his relatives. He thought this cinematographic project could be beneficial for his kin as it had been for him. Romeo has also advised me regarding the narrative and relational approach to take and has been very helpful as to the Romani/French translation.

For my part, I was already interested in the situation of the Roma people having migrated to Canada, within the framework of a M.A. project which integrated cinema to sociological research. Once settled in France, I've tried learning more about the topic by getting involved in the community milieu, filming for Latcho Divano for example.

It has now been three months that I have been spending time with Maria, Vasile, Gedu, Nicu, Radu and the other families from the squat. We have gradually established a trusting relationship through exchanges of services, glances, and laughs. The camera is slowly brought into our interactions, in hope that collected sounds and images will pay tribute to these moving encounters.

The film crew is very minimalist, hence flexible and reactive. I, Mariane Beliveau, a sociology research student also trained in filmmaking and editing, will take care of the camera, the sound recording and the editing. Of course, I will seek advice from other filmmakers and editors throughout the process. The shooting will thus have the advantage to of being very economical and the field more easily accessible.

The primary goal of this crowdfunding :

To give back to the participants.

The ideal budget to achieve this projet would be around 10 000$/7000€, but this crowdfunding do not aim to collect such an amount; It serves to give a necessary boost. This is why the aim (700 euros) is more than realistic, in order to optimize the chances of success. I, Mariane Beliveau, will collect the full amount and will distribute the money as indicated below. This modest amount will make a big difference for those who will benefit from it.

I try to contribute as much as I can since the beginning : by bringing diapers on the squat, by filming a baby's baptism to give a DVD to his family and by committing to make a videoclip for the musicians. However, I don't have a salary, and I'm not asking for one; I only need to cover some of the technical needs to bring this project to fruition. Since I don't believe having enough notoriety to obtain financing from SODEC or CALC, I call upon your generosity and your desire to support a young and socially-committed filmmaker.

Help me co-produce this documentary :)

We would also need :

More than half of this amount will be used to :

Overall, we would still need additional euros to cover all the expenses the film generates.

If we exceed our goal... THANK YOU SO MUCH !!! The additional money could be used to :

- Pay the translation costs for subtitles

- Give back to the participants

- Get help from another film editor

- Benefit from the work of a graphic designer

- Buy a steadycam for DSLR

The research/screenwriting phase started this winter and spring.

The crowdfunding money will be particularly useful during the shooting of the film, a phase which is already underway and will intensify until the end of September.

The editing of the film will take place throughout fall and could be extended throughout winter. The shooting could also continue during that time, in order to complete our material and not miss an opportunity to enhance the film's narrative content.

It may be noted that these are interconnected phases :  the documentary process requires to constantly go back and forth between research, filming and editing.

Then it will be the moment to think about giving some visibility to the movie and start looking for festivals :)

The money is going to be used to :

- Cover their basic needs for a certain period of time (diapers, food, etc.)

If this crownfunding works well, there will potentially be a step #2  to ease the post production process, but one thing at a time!

From 1 to 15$ CAN : A huge thank you, because each donation brings the project one step further :)

Or for 25 $ : Our sincere gratitude and a DVD * + note from the filmmaker ! * If shipping charges exceed 5$, we will give you a link to download the movie

Or for 75$ CAN : Our sincere gratitude, a DVD + note from the filmmaker + additional scenes, a poster of the film (A2), a series of 3 postcards (148 x 105 mm) and 2 MOVIES RATHER THAN 1 : The link to download "Récits Gabriélois" - another film of Mariane Béliveau, co-directed with Clara Ciccone Blanco, that tells the story of a village in eastern Quebec by sharing personal accounts from those who have built it !

Or for 145$ CAN: Our sincere gratitude, a DVD + note from the filmmaker + additional scenes, a poster of the film (A2), a series of 3 postcards (148 x 105 mm), a custom printed bag, the DVD of "Récits Gabriélois" and a paper about the link between cinema and sociology, written by the filmmaker!