Bring the Thalassa from the Mediterranean dea to the French Antilles

Bring the Thalassa from the Mediterranean sea to the French Antilles 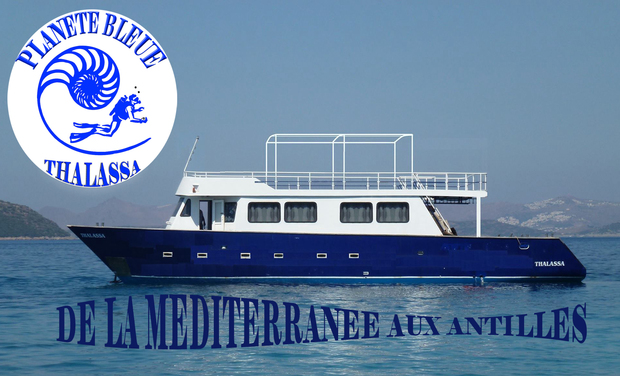 Bring the Thalassa from the Mediterranean dea to the French Antilles

Cost of the transportation

My Name is Thalassa.

A predestined name as a Greek

I am a coastal boat measuring 21 metre of length and 5.5 metre large. I've got a huge back deck, another that is closed and underneath a sun deck. Let's not forget my diving platform!

After navigating as a leisure boat for divers in Turkey, I was abandoned in Bordrum's harbour (Turkey). My health started to deteriorate and rust got hold of me.

For the first time, on a beautiful morning in January 2017 I met Thierry. He is a very nice Frenchman who wanted us to navigate again and go on an adventure. It was love at first sight!

After the exchange of a bag full of "Yesil Erik" (small Turkish green prunes), the deal was quickly sealed with my previous owner.

Thierry explained everything to me: First, we would navigate to France  (Leucate Harbour) where I will be fixed up. And once ready we would go to the Antilles: in Port-Luis Harbour, Guadeloupe. What a wonderful schedule, I thought!

So, in July 2017, after my two engines has been changed, after enduring an earth quake, a small tsunami and after witnessing for the first time a Breton Privateer's tantrum, we finally got to sail to France.

W arrived in August 2017 in Leucate Harbour where I saw myself being pulled out of the water to get fixed. I have to admit I was pleased to be taken care of as my machines weren't working too well any more.

My new owner decided to give me all the new technology as well as an attractive appearance, so I could navigate and pleased many new passengers for many years to come. There is a lot of work to be done!!

Everything in me was checked and changed, so I could become an environmentally friendly boat. My engines are low consumption in fuel. Same goes for my compressor and generator. I have a tank for used water and WC waste disposal. Nothing is rejected in the ocean.

The wheelhouse has been changed as well as the navigation system. The kitchen has been reorganized with new equipments (plancha, fridge...). Patrick will now be able to prep delicious meals for the passengers.

Work is done after delays, additional charges and imponderables (hole discovered in the hull of the boat.). I am almost ready to sail again and I feel quite excited about it!

Banks are refusing to help finance my transportation to the Antilles. It is the reason why I am asking for your generous donation and help.

You can't let me rust again on this construction site!

The Thalassa transportation to Guadeloupe in order to:

- Show the 80% of the none directly accessible planet: the ocean.

- Explain the purpose of the marine life and it's ecosystem.

- Bring awareness n the results of human actions impacting the ocean and its inhabitants.

- To educate future generations to respect and preserve the underwater wildlife.

- Discover new sensations of freedom, of weightlessness from diving.

- Being active in protecting and cleaning Guadeloupean coasts.

- To create and organize festivals and photographs meetings.

All this taking place in one of the most beautiful region of France where preserved diving spots still exist: Guadeloupe and its islands!

Thierry grew up close from the ocean. Professional diver in the French National Navy, he then, became an engineer. But Thierry nourishes a passion for the underwater marine life.

After a terrible accident: a burning hot fryer exploded in his arms, he realized that water and a clean environment helped him heal. So in 2010, Thierry became a certified scuba diving instructor (BEES1) and worked in Guadeloupe

Patrick is a boat enthusiasts who, at a young age, boarded as an officer onto a merchant navy boat. After several years sailing the ocean, Patrick decided to set a foot on land to start a family and became a business manager.

But never completely letting go of is first passion, he bought a 21-metre-long barge to live on it and travel with his family.

Patrick misses the ocean and decided to join his cousin Thierry in this common project.

What's the money going to be used for:

The first deposit will be for:

- Deposit for the transportation company who specializes in escorting big boats on adapted vessels. It is planned to be shipped in October.

The second deposit will be for:

- Paying in full the company which sailed our boat safely to Guadeloupe.

One entire week on The Thalassa

We give you a printed t-shirt with our logo. PLUS You get to spend an entire week on The Thalassa: one week of diving and more! Half board in a vacation rental. Offer starts January 2020

Be part of our adventure.

Your name and picture (optional) will be put on our sponsors board which will be hang on The Thalassa. Offer starts Decembre 2019

Your name and picture (optional) will be put on our sponsors board which will be hang on The Thalassa PLUS Your name will be mentionned on our web-site, onto the page dedicated to our sponsors. Offer starts Decembre 2019

Your name will be mentionned on our web-site, onto the page dedicated to our sponsors. PLUS You will receive a beautiful signed picture of The Thalassa. Offer starts Decembre 2019

Be part of our staff

We give you a printed t-shirt with our logo PLUS You get to spend an entire day on board of The Thalassa where you'll be able to dive or snorkle and eat a free lunch on the boat. Offer starts January 2020

We give you a printed t-shirt with our logo PLUS TWO entire days on board of The Thalassa where you will be able to dive or snorkle and eat a free lunch on the boat. Offer starts January 2020