François Missen, winner of the Pulitzer Prize and the Albert-Londres prize needs you to finance its documentary about Santeria in Cuba. 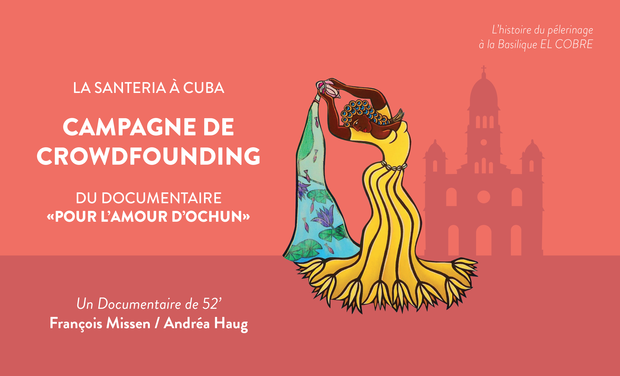 Poster of the documentary "For the love of Ochun"

Ochun, Virgin of the Our Lady of El Cobre and goddess of freshwater, represents sensuality, femininity, love but also infidelity ... The yellow and gold are the colours of the necklaces worn by followers of the patroness of Cuba.

A representation of Ochun

During the fifty years of presence of the Soviet Union in Cuba, while religions were reduced to hiding, another was spared, the most widespread. This is Santeria, midway between Catholicism and voodoo, inherited from Spanish colonization.

Very popular in Cuba, Santeria develops increasingly away from the island and especially through expatriated Cubans or mediated through Europeans, such as Jeanine Carta, a Marseillaise initiated since serveral years, a practitioner from the Canebiere.

François Missen will take you to Morales to the exact spot where the castaways brought back the statue of the Virgin. You will also follow the pilgrimage of the villagers. All save throughout the year to make their offerings to Ochun and to assure during three days a diet based on rum and yuka.

The road travelled by the faithful every September 7th

Every September 7th, the villagers go close to Santiago de Cuba and participate to the pilgrimage Our Lady of El Cobre, 25 kilometres from Santiago, where flows nearly a million Cubans and international followers of Santeria. Among its prestigious guests include writer Ernest Hemingway, who offered to the basilica his Nobel Prize medal, and Fidel Castro, who gave his medals from the Revolution.

The Basilica of El Cobre

The last distinguished visitor in the Basilica is none other than the former Pope Benedict XVI. This year in September, Pope Francis will honour the Basilic with a visit during his official trip to South America. Each year, on 7 and 8 September a pilgrimage attracts thousands of people from the Bay of Nipe, on the Atlantic coast of Cuba to the hamlet El Cobre. In this place a basilica was built in honour of Our Lady of El Cobre, called the Basilica del Cobre. This year, Pope Francis himself will give honour with a visit to the Basilica.

The interior of the Basilica del Cobre

This report will bring to light this mysterious and exciting religion.

Teaser "For the love of Ochun" - Anglais

The collection will fund:

·      and a month of editing and post-production of the documentary.

The goal, to reach the sum of 25,000 euros. Any amount collected in addition will be donated to the France Guantanamo association, to which François Missen is a member and founder. The objective of which is to promote cultural connections between France and Cuba, specifically the city of Guantanamo.