Celebrate the end of the summer and embellish our interior with this illustrations of an other age by backing this project. 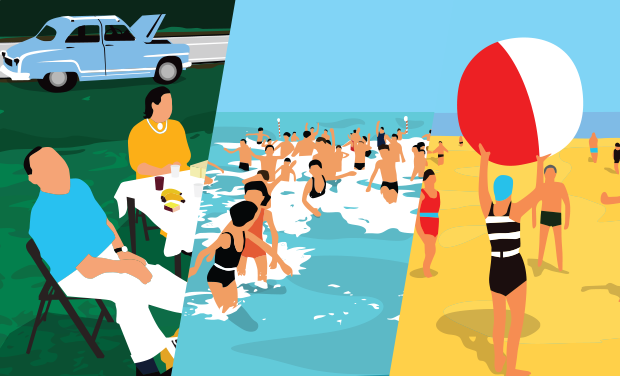 1936, the first paid vacation are signed in France. It's the beginning of a new era, an era of family campings, field picnics, the salami is cut, the wine bottle is open.

In this end of year 2016, it is with a little melancholia that I propose this series making us remember this past time that is still in our imaginary. This series is an ode to nothing, to the simple instants shared.

Based on old photographs, the simple graphic choices of the illustrations  are intended to give the impression of a memory more than to witness an era. In this scenes, there could be any of our grand parents.

The numeric prints will be edited on a quality paper "Canson Arches Velin Museum Rag 315g". This 100% cotton paper is in particular used for lithography because of its strength against the effect of time, its nice texture and its natural and warm white.

If the project is funded, I will start the prints at the beginning of October, once numbered and signe, I will ship the illustrations around mid-october.

Backing this project, in addition to receive a decorative piece numbered and signed to keep or to offer, is backing my passion, it will also help me investing in more material for future arts.

30% will help me getting  new material for serigraphy

30% will be used for personal expenses

A BIG thanks to all the backers !