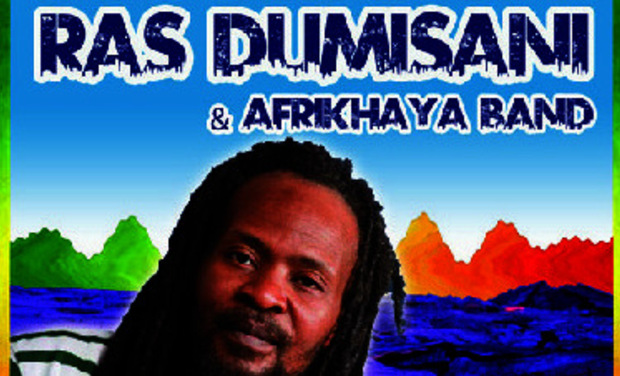 Descendant of a royal family (Shaka Zulu), and of a singing father (member of gospel group Ladysmith Black Mambazo) Ras Dumisani was born and grew up in  Durban, in the Kwazulu Natal province  of South Africa. It was there that, from a very young age, he started singing in the famous Gospel choirs of South African churches. Soon thereafter followed a precociously rich experience in percussion with local jazz groups.

Oddly, however,  RD originally started his career as a footballer, playing under contract in national championship teams, before choosing the path of music, and more specifically, reggae. He first joined the group “Oneness, Love, and Music” before deciding to create his own group, “Afrikaya”. Limited by the opportunities in Durban, he moved to Johannesberg. But in a South Africa still under Apartheid, local producers were not yet ready for the rhythm and the political commitment of his words and music.  Thus began a long voyage. His passion for music, added to his strong desire to exchange his rasta ideals took him to England, Holland, Germany, Portugal, and finally, France. It was in Paris, in 1992, that RD found a record label for his first album, Zululand Reggae, recorded with participation of Mikey Dread and Dennis Bovell (bass players for Kwesi Johnson and Alpha Blondy).

Five years later, after a well received appearance at the Midem, RD put out his second album, Mister Music, still backed by his own group “Afrikaya” and mixed by Dennis Bovell. Recorded between Paris, London and Kingston, where Ras Dumisani chose Bob Marley’s legendary Studio Tuff Gong to record his third album: “Call on me”, decorated with some old Jamaican acquaintances, like Mac Dermot, Rohan Dwyer, Carlos Allwood and Gary Sutherland. He was also accompanied by some friends: Leroy ‘Horsemouth’ Wallace on drums, Johnny Dizzy Moore on trumpet, Dean Frazer on saxophone, percussion from Count Ossie Junior and the Mystics Revelations of Rastafari, young DJs like Alpancho and a few veterans like Prince Jazzbo. Recording began in Paris, at the Chauve Souris studio, with Joe Etti, then continued with Dennis Bovell and Mad Professor at the Ariwa Studio in London.

Concerning this creatively rich period, he says himself:

“Always true to himself, Ras Dumisani crafts profound music of mixed race which draws its sources from many voyages. This English-speaking reggae with a Zulu complexion benefits from international recognition. Ras Dumisani continues his travels through European landscapes, and beyond. The generosity of his performances meets with genuine success from reggae aficionados, but also from newcomers and professionals alike.”

2011: Ras D tirelessly continues on his creative path.  Since “Call On Me”, as an independent producer-artist, he has expanded his discography with four albums: Anthologie (2003), Résistance (2008), Best Of Ras Dumisani (2009), and Rise And Shine (2011). His Jazz roots shine in these efforts, making his new works each more technically adept. His inherent harmonic sensitivity, the poetry and the subtlety of his lyrics, mixed with his own unique sound, confirm the brand image, for all who follow or accompany his career since Zululand Reggae – in other words, for more than 20 years.

In 2012, Ras Dumisani is issuing his eighth album, Motherland. Here are the initial words of Gilbert PYTEL, head writer for REGGAE VIBES MAG, on his first listen to the new album:  "Motherland" is quite simply the best Album from Ras Dumisani. It marks a return to his reggae roots.

All of prepares the way in 2013 for a tour without borders under the name of Africa Home Band Tour. As for 2014, 2015, 2016,…, there are no signs of slowing down, with at least as many unreleased works in preparation, including “STAY AT HOME” and “MY SUN SHINE” – made available with the title “Set Me Free”: