A webdocumentary about the rise of the Cambodian cultural scene. Discover a new generation of artists. Step up to dance ! 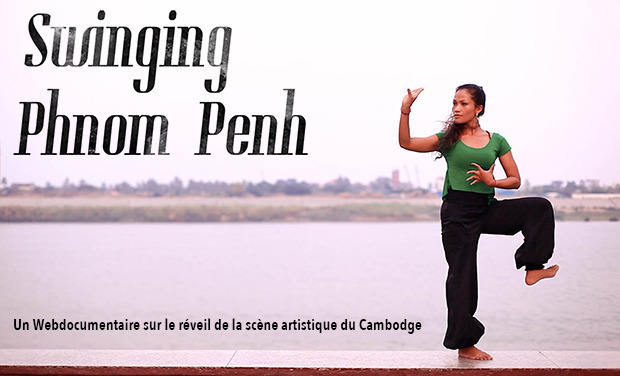 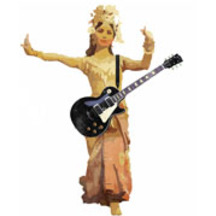 Interview of Éléonore on the first TV channel in Cambodia

This interview has been broadcasted on CNC in the weekly show «La Semaine du Cambodge», on Sunday, 19th May (in french).

A different vision on Cambodia, Today's Cambodia ! Swinging Phnom Penh goes off the beaten path and introduces you to a new artistic scene, still small but bubbling up, connected to its roots but turned towards the future. A first project.

In the 60's and 70's, Cambodia was "the pearl of Asia», and Phnom Penh its centre of gravity. Its rich and modern cultural life dominated South East Asia on a psychedelic rock and roll soundtrack.

In 1975, the Khmers Rouges took power and emptied the cities in order to recreate ex nihilo an exclusively agrarian society. Among the "Ancient People" (every person thad had even a small intellectual capital), the artists, considered as symbols of a decadent nation, were systematically targeted. Some of them escaped, but most died during these 3 years, 8 months and 20 days of terror. The cultural industry went down, but the artists stayed alive in the people memories.

The 15 million inhabitants country is now recovering, Phnom Penh is bubbling up. 70% of the population is younger than 30 and the youth want to move ahead. Besides the frenetic reconstruction of the country,  the desire of creation returns fiercely, culture re-borns. Thanks to the NGOs work and the return of members of the Cambodian diaspora, the artistic scene slowly recovers and strong personalities appear.

Rock bands that play the golden age standards, self-taught plastic artists, apsaras influenced by contemporary dance. Performing artists in touch with social filmmakers, visionary photographers, hip hop artists and modern times poets. This is the atmosphere we want to depict, with an objective point of view.

A SERIES OF PORTRAITS

Swinging Phnom Penh is our very first webdocumentary and we want it with a clear, easy-to-use interface. It will be made up with a series of portraits concerning these artists in all their diversity. These video sequences (5min max) shot in HD will be gathered on an interactive interface.

The artists testimonies will be at the heart of the project. Each portrait will show the artist in its singularity (origin, artistic background, message) and will highlight cross-cutting themes for consideration (Art market in Cambodia, link to society, vision for the future) in order to try to answer to the question: what is it to be an artist in Cambodia today?

At the end of each sequence, the opportunity will be given to click on one or two links to additional content. Cambodia is still not very well-known in western countries, so it is very important to bring an educational dimension to this project, by giving the keys to understand the historical context in this country, or to discover more about a production field. Texts, videos, sound extracts, links or archives will be added to each portrait.

...in french and in english

From the beginning of the project, each support is published both in french and english (Facebook page, blog, KissKissBankBank page). We want to do the same for the webdocumentary, to allow it to be seen by the english speaking population in Cambodia, particularly the youth that often doesn’t know about the richness of its own culture.

She is 23, grew up Phnom Penh. He is 37, was born and raised in New Zealand by a Cambodian mother and a New Zealander father. He made a name for himself in New Zealand as a street artist before moving to Cambodia. Their black and white tribal and organic styles combine perfectly. Since they met, they've painted together during live painting shows or on hidden walls in Phnom Penh or abroad.

Kim Hak the photographer of time

Kim Hak bought his first camera in 2006 and joined the "Studio Image" of the French Institute two years later. At that time, he knows he want to become a photographer. So he gather his savings, asks some friends for loans, and begins his adventure. After attending several workshops, his series ON, "Old Buildings", "New generation" about the old buildings of Phnom Penh emerged. Kim Hak likes to work on textures and the test of time and does a sensitive and necessary remembrance.

This rock band was made up after an unexpected encounter. In 2007, Julien Poulson, an Australian musician wanted to record classics of the golden age of Cambodian music. He then discovered Srey Thy, a karaoke singer passionate about the psychedelic rock and roll her mother used to listen to when she was young. From then, their musical odyssey is taking shape, joined by musicians from different backgrounds. They give life back to the live music scene in Phnom Penh and have recorded the first vinyl in Cambodia since 1975, before travelling the world to share this very unique sound.

A 25-years-old journalist. Eléonore grew up in the Paris area, where she studied cinema and communication, before going to the Ecole de journalisme de Lille (ESJ) from which she graduated in 2012 with a Web major.Then she worked for several print medias before she made the leap to embark on this project cultivated for many years. She discovered Cambodia, her father's motherland, when she was 20 and promised herself to come back. Three years later, she did an internship at the Phnom Penh Post, in the lifestyle section, where she dived in Cambodia's cultural life, rich and unexpected. She wants to show a different aspect of this country, poorly represented in the french medias apart from its touristical aspect or the news about the Khmers Rouges trial, that she developped Swinging Phnom Penh, from shooting to editing. And that's also her who negociates for tuktuk rides !

Damien can do everything! Born in the Auvergne region, he studied general engineering at the Institut Catholique des Arts et Métiers (ICAM) whch slogan, simple and efficient, made the man : “To finish”. Interested in Asia since his childhood, he went to China in 2008 and spent three months, working in a shoe factory. “Damien” became “Lujuao” (who knows!), he drew to communicate and successed to improve the prduction line. Right after that experience, he discovered Cambodia and fell in love with the country. Once graduated, he worked in the luxury field and got interested in photography, film, digital and eve polaroid. His ingenuity allows him to manage not only the sound record, but also the graphism. And he knows how to fix a motorbike!

This money will help us to pay for some of the expenses of the shootings in Cambodia and will finance the web development of the webdocumentary.

What we need to finance :

A portion of the investment in shooting material (second-hand Canon 5D MarkII, 20mm lens, 50mm lens, a tripod, a sound recorder), another part of the material has been very kindly loaned to us.

Purchase of a webdocumentary dedicated software license (like Djehouti or Klynt) + help of a web developer.

If we get more than that...

We'll be able to finance another portion of the expenses (visas, tuktuk rides, residence..) and also pay our friend Leakhena who translates khmer for us and who spends more and more time on this project.

(=6,5$) Your name in the documentary credits to thank you for your support. Every contributor will receive this counterpart.

(= 40$) An iPad sleeve made from recycled rice sacks, approved by asian geeks + a nice Krama

(= 260$) One invitation in the best Cambodian restaurant in Paris + A shopping bag or an iPad sleeve + a mini-Buddha, certified good-luck charm !

(650$) An original drawing of the artist LISA MAM