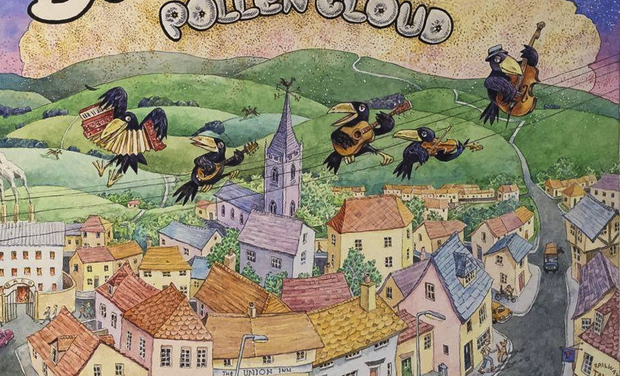 The Downtown Merrylegs is a folk/rock band based in Paris, whose members originate from England, Ireland, Australia and France.

Their original songs draw on the considerable songwriting talents of frontman Charlie Seymour. Musically, the songs are brought to life with acoustic and electric guitars, violin, mandolin, bass and drums.

In 2012 The Downtown Merrylegs released their six-track EP "Songs for the Seine", which received critical acclaim from music journalists and professionals around the world:

“I'm three songs in and loving it. Right in my wheelhouse.... I hear some rootsy early Americana meets Paul Weller... honest, soulful, subtle, powerful and melodic."

You can listen to some of the tracks from the EP at either:

...and here's a music video for the track "Kallithea Girl" from that EP:

Since then Charlie has been busy writing loads of great new material, and we are now ready to record our debut full-length album. The twelve original songs we've chosen for the album have already proven to be big hits during our live performances.

We're really excited about this album - we're proud of the new material that we've been working on, and based on the reaction we've been getting at our live shows, we're confident that you'll like it too. We just need a bit of help to get us across the line financially.

That's where you come in!

We've financed the first stages of the recording process ourselves and the money we're hoping to raise here will be used to finish the rest of the recordings and to mix the album (which will cost 3000 euros), then graphics for the CD cover and the manufacturing of the disc (1000 euros).

As you can see, there are quite a few steps that need to be financed but with your help - we can do it!

If we manage to raise more than our target of 4000 euros, the extra money will go towards mastering and then promoting the album.

Thank you again for your support and see you soon!

You get a thank you email with two mp3's from the new album attached for your collection.

You get a digital download of the new album .

Hot off the press, pre sale of our new 12 track CD delivered to your door.

Hot off the press, pre sale of our new 12 track CD delivered to your door, plus the album download.

The 6 track CD "Songs for the Seine" plus the above.

All of the above plus The Regal Kings excellent CD "Dancefloor Diamonds"! See reverbnation.com/theregalkings

You get 4 copies of our new album to share and give away as presents,plus all of the above.

All the above plus a private duo concert featuring Charlie and Melissa. *(Dates for "all concerts" to be arranged between us and will include travel expenses outside of Paris)

All of the above plus a private acoustic concert with the band and a special dedication to you on the hard copy of the album if you want it plus many many thanks.

All of the above plus a private concert with the full band and a special dedication to you on the hard copy of the album if you want it, and of course, many many thanks.