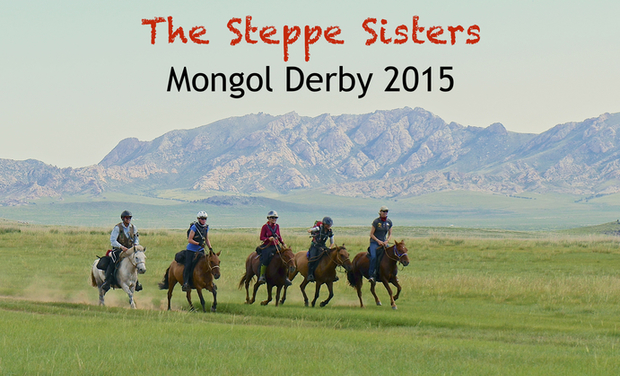 Sophie Wilford: 30 something Anglo-Belgian veterinary surgeon specialising in horses, having worked in the UK for 7 years, now working with a pharmaceutical company in France, experienced globetrotter and veterinary volunteer around the world, ‘up-for-anything’ and slightly bonkers…

Sian Dyson: 30 something English Paramedic who works in Hospital Emergency Planning in Bath, and has a passion for horses and any related adventures and of course, also slightly bonkers…

In 2014, we were both crew members in the Mongol Derby and worked as vet and an event manager. During the race, we were actively involved in the welfare of the horses and riders. The herders were keen for us to examine their herds for various ailments as well as themselves as they have no access to medical help out on the Mongolian Steppe. The overall experience was unique and very humbling. We would both repeat it in a blink of an eye and this is what prompted us to take it a step further and participate in the race ourselves.

What is the Mongol Derby?

The Mongol Derby is a multi horse race across a distance of 1,000km over a maximum of 10 days involving approximately 40 experienced international riders. The race is modelled on Ghenghis Khan’s postal route and involves 40km legs with a different semi-wild Mongolian horse every time. Overnight stays are with local families or under the stars. There are multiple strict rules for the riders and their mounts. The race is supported by an experienced team of vets, medics, race managers and crew.

Since 2009 the race has become more and more recognised around the world and generates a huge amount of publicity for riders, their charities and sponsors.

Together we are ‘The Steppe Sisters’, friends first and foremost, a fantastic team that is in it to win it on a personal level but especially for our chosen charities and sponsors! We bring an original international alliance twist also with our Anglo-Franco Vet-Medic image!

We feel that we are riding the derby in a way that has not been done before. Although some riders pair up for parts of the journey, they rarely set out as a team and finish as a team. We intend to ride it as a team from start to finish. Why? Because we feel that this different approach will generate more interest and publicity and therefore impact directly on our fundraising and ultimately really motivate us through this challenge.

Although some riders do some fundraising for their Mongol journey, this is often not their ultimate goal and they do not tend to aim for the sort of sums we are pitching for. We feel that this will have a much bigger impact on the charities directly via the money donated but especially indirectly by the amount of publicity it will generate

We are asking for 3000 euros on KissKiss BankBank but please don't stop if we reach our goal, we need a lot more...

We need to raise £15,990 for the both of us to participate. These are the deadlines:

Because of the publicity this race generates on its own and the slightly alternative slant we are giving it, the race becomes an investment that will prosper in to considerable funding for our respective charities.

AVSF is a french NGO with a team of 280 international members in 20 countries where it carries its activities.AVSF helps livestock farmers group together to combat animal diseases. In Mongolia for example, more than 40 Livestock Farmer Groups have been created, allowing for more efficient organisation to fight against parasitism and the major infectious diseases affecting livestock. AVSF leads numerous initiatives in this area to promote animal health, including: a project for treating brucellosis in ruminants in a pilot zone in Mongolia, in collaboration with the national Veterinary Services.

In addition their other areas of expertise include natural resource management, smallholder organisations and markets, climate change and post-emergency work. They are also actively involved in awareness-raising activities.

The charity has no paid staff and relies entirely upon the generosity of fundraisers. Money raised for the charity funds weekend breaks and special camps for young burns survivors from across the South West who have been scarred by housefires, explosions, electrocutions and scalds. During these events, the children face new challenges, build friendships, learn from other children’s burns experiences and provide each other with invaluable support.