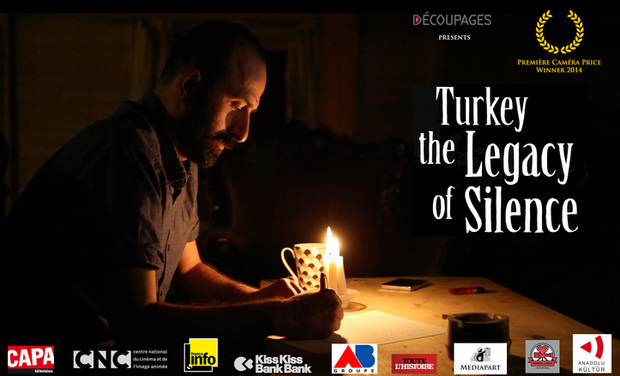 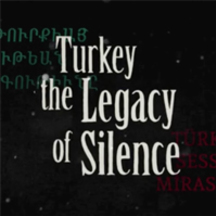 A documentary and a web-series about four Turks discovering their Armenian origins... and breaking silence.

THEY SPEAK ABOUT US !

Thanks to the commitment of broadcasters and audiovisuel media public institutions, we could start the production of this project which we are working on since two years now. But the economy of documentaries and web productions runs in a way that gathering all the necessary funds is a difficult task for our production company Découpages. Thats why today we ask for your help to achieve this beautiful project for the genocide commemoration in April. Happy reading and thank you very much.

For the past two years, driven by a desire to give voice to the Armenian survivors, we have been working on Turkey, the Legacy of Silence. We are currently seeking funds to complete the project in time for a release in April 2015, fundamental date for all the Armenians of the World. In fact, they will commemorate the century of the genocide of their ancestors in Anatolia. Staging four similar but distinct characters, Turkey, the Legacy of Silence is a documentary and an interactive web series which illustrates the universal story of secrets and the unsaid.

Through the stories of Nazli, Armen, Dogukan and Yasar, we will reveal the weight of silence, still burdened by thousands of Armenian descendant families. Our seek is what has never been told, what has been hidden for a century.

Armen, Dogukan, Yasar and Nazli are Turks and Kurds. However a surprising discovery drastically changed their lives : they are also Armenian. Their parents and grandparents survived the genocide of 1915. They were all assimilated in turkish and kurdish families and converted to Islam to save their lives. Since then, the secret has been kept. After a century of silence, History is reappearing. Actually seeking for their ancestors story, Armen, Dogukan, Yasar and Nazli are ready for anything : searching, asking, angering, hoping…

Yasar Kurt, famous musician in Turkey, learned at the age of 39 that he was Armenian. With us at his side, he sets out for the first time to his great-grandfather’s village, in an attempt to find the traces of his history.

Armen, 54 years old, found the official registers proving that the vast majority of his family was decimated in 1915, and that his father was converted. Today he is trying to give new life to his identity through the church of Diyarbakir, in Turkish Kurdistan.

Nazli, 36 years old, wants to pass on her long-hidden Armenian identity to her seven-year-old son. This woman has been fighting with Turkish authorities for two years in order to enroll her son in an Armenian school.

Dogukan, 22 years old, made the highly symbolic decision of reconverting to Christianity. He will be baptized as Sevag, the name of a murdered Armenian in 2011 during his military service.

During this documentary, we sight to understand why these stories remained so long in the shadow. Many families were aware of this reality. But it disappeared from History as if nothing happened. We now know that they survived at the cost of abandoning their name, language, religion and most of their traditions.

Why keep silence for a century long ? What has this legacy of silence hid during decades ? Since ten years now, increasing numbers of Turks have discovered this familial ans societal secret, maintained by Turkish state. These people are now proclaiming the Armenian heritage of their ancestors. Turkey, the Legacy of Silence gives a face to the descendants of these Islamized Armenians, who number more than a million people in Turkey today.

A DUTY OF REMEMBRANCE

Turkey, the Legacy of Silence isn't only the touching story of four people, this is also a worldwide call to the duty of remembrance. Among the survivors of the genocide, some fled the country. Others remained in Turkey. But the price of their survival was high : assimilation, conversion to Islam, and above all, silence about their origins. Today, despite the risks, fear and shame, Armen, Dogukan, Yasar and Nazli have the courage to break the taboo on their Armenian roots and show their faces. For them, this heritage has finally come out of oblivion, traditions must be born again, their stories must be told.

A DOCUMENTARY AND A WEB-SERIES

We are writing a 52' documentary which will be broadcasted, for the moment, on a french TV channel : Toute l'Histoire. During the film, we will be guided by Armen, Dogukan, Yasar and Nazli in Istanbul and through eastern Turkey and follow them in their Armenian identity seek. These stories will be enhanced by historical archives and commented by experts. We can also count on the support of the Institut Anadolu Kültür in Turkey, an organization striving for dialogue between Turkey’s different communities.

The five experts of the documentary

Fethiye Çetin. Lawyer and activist for turkish human rights. Her book My Grandmother : A Memoir relates the story of her Armenian Grandmother who survived the genocide by converting to Islam.

Ayse Gül Altınay. Turk sociologist. She works on nationalism and the duty of remembrance. She wrote, with Fethiye Cetin, The Grandchildren, which presents the testimony of 24 descendants of genocide survivors.

Adnan Celik. Kurd anthropologist. He's one the rare expert about the islamized Armenians in Diyarbakir.

To reach the younger generations we planned using the medium of video, easy to use and share, in a form that is familiar to them : the web series. 5 video episodes of 8 minutes each will be released online every three days until April 24, 2015. The stories of each character are rich enough to perfectly adapt to a series format. In parallel to the central narrative, we have developed 10 chronological markers of 1-2 minutes each (2 per episode), which will portray the events of 1915. Each of them is illustrated by drawings and will be personified by a voice over.

The public will be invited to offer testimony on the website. This space will be open for three months, under the careful advance control of moderators. We will also launch a call to Internet users around the world so they can answer this question : “Why is it so important to break the silence ?”

Screen capture of the web-series

Illustrations for the web-series, by Aline Rollin

I know little about the immigration of my maternal grandparents to France, or their life in Turkey. My grandfather was from a village near Ismit. My grandmother was conceived in Istanbul and was born on the exile road. Today I have decided to tell a part of their story, by remaining connected to the present.

For Armenians, speaking of the genocide is often a painful moment that provokes passionate debates. Today, I have found the project that best depicts my vision : as a young journalist and as an Armenian descendant, I want to re-establish the memory of the genocide in modern-day Turkey. I also want to initiate dialogue between the two communities.

I lived for four years in Lebanon, not far from Turkey. The Land of the Cedars did not experience the genocide, but its problems of identity led to a terrible civil war that has ended only in appearance. Most of the people I met saw themselves as Shiite, Druze, Assyrian or Maronite first, and Lebanese only second. L’Orient-Le-Jour, I witnessed confrontations in Beirut between Shiites and Sunnis. Those four years taught me how deadly the question of identity could be. When Anna told me she intended to work on the Armenian genocide, I jumped at the chance to join her. The idea about exploring the topic of silence around identity in a culturally rich country such as Turkey, strengthened my desire to participate in this project.

He collaborates with a number of documentary production companies (Ciné Tamaris, Yami 2, Mosaïque Films…). He currently works as a boom operator and sound engineer for various projects including short and feature-length films and web documentaries.

Always seeking to find the best user experience, I enjoy exploring the new stories made possible by the digital experience, and utilizing its tools to tell the stories that move me. When Anna and Guillaume presented their idea of mixing testimony, web-based participation, and new technologies, I didn’t hesitate for a second to accept this beautiful and creative venture.

She divides her time between sketch reporting, educational illustration and information graphics. Illustrating Turkey, the Legacy of Silence has involved the exciting challenge of bringing forth, from the historical archives, drawings that are noticeable and narrative.

At the moment, we went four times in Turkey. We spent one month and a half scouting Anatolia to find Armenian descendants. Last July, we spent one month shooting the images of the documentary. Finally, in december, we went to Istanbul for one last shooting journey.

The intense writing and field work were made possible by the public and crowd funding we gathered this last year. With the support of our production company Découpages, we won a writing and production help allowed by the CNC (Centre National du Cinéma et de l'image animée). Turkey, The Legacy of Silence won also two categories in the 2014 Première Caméra prize (documentary and web documentary) organized by Kisskissbankbank, the agency CAPA, France Info (Radio France group) and the AB Groupe. These financial supports allows us to offer Turkey, the Legacy of Silence in two forms.

Until April 2015, we still have A LOT to do : Logging, editing, standardizing, translating, illustrating, developing, testing, promoting, and then, at last, broadcasting. For the moment, we still lack funds to edit the web series, develop the web site and translate the film in english...

To honor the memory of Armenian History, to mark the genocide century and reveal the silence, this work must be accomplished by the best professionals. Once that's done, we have to promote the project worldwide, outside France. Especially in Armenia, Turkey, United States, Russia, Argentina, Canada... For every Armenians of the planet, youth and elders.

Your help will make this film possible !

If you appreciate this project, you can support it financially, you can share it and talk about it.

Let's get in contact! Suggestions, remarks, support, anything. Even if it's just for a tap in the back, any gesture is significant.

THANK YOU VERY MUCH !

January : Editing is reaching to an end! We should be able to show the movie to festival organizers very soon!

- Paris, to be determined

WHY DO WE NEED YOU ?

The project exists for the moment thanks to the support of

• Shootings in Turkey during 45 days, including transportation, food, shooting material, a professional sound engineer, and a local fixer (30,000$)

What we still need to finance

• Translation of the documentary and the web-series in english : 5,000$

• Post-production of the documentary and the web-series (color, sound design, audio mix, recording) : 6,000$

If we reach more, we intend to push further our intentions

• For 50,000$, we will organize broadcasts of the documentary in United-States and in Turkey.

• The more you help, the more we'll promote internationally !

A HUGE THANKS! And your name in the credits of the documentary

DIGITAL PICTURES The compensations above and... Three high definition pictures of the film sent by email

EXCLUSIVE PARTNER The compensations above and... you become and exclusive partner, we will share with you all the postproduction, distribution and communication process.