What if you saved an old (but threatened) dream: the life (and livelihood) of a shepherdess-cheese-maker and her black and white sheep… 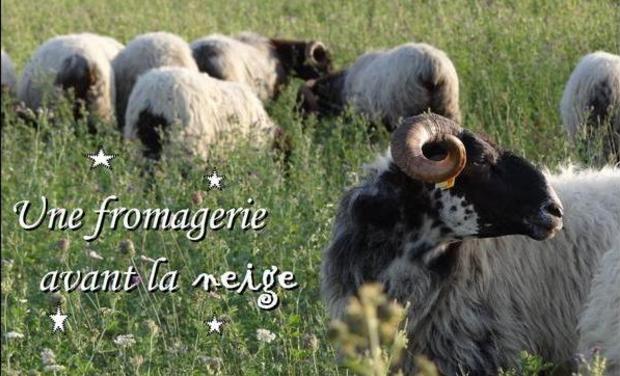 A cheese dairy before the snow

Today panic has reached us: the sheep-house will probably be completed before the snow, ready to welcome the ewes with their growing bellies. However the cheese transformation workshop, which should ideally be operational from late January (a few weeks after the birth of the lambs), will not be without your help.

It would indeed be my whole project, about to be properly launched, that would be brought to a halt because of the slightly over-ambitious choices that I made: the mountain and its snow, nice strong ewes whose first quality is not the quantity of milk they produce, a wooden building a little too perfect, all this with my tiny lady’s muscles and my hair turning blonde every time I need to even think of repairing a machine!

At the start: a dream

Ever since I was a child, I always wanted to live and work with animals, but the idea seemed so simple that it took me a long time to accept it

After a long and winding path (I finished for example a Master on ‘Training on the knowledge of inner-cities’ I am quite passionate about that too) it is at 35 that I finally do my ‘coming-out’.

Because I have a marvellous man, because we have discovered a wonderful place to live which is an ‘animal rearing area’ and because we have been lucky enough to meet truly helpful facilitators, I have the great joy of being able to set up what had remained inside me for so long: a farm, animals, good farm products, space, water and wind and the possibility to share this with all the people who, like me, miss this terribly.

Behind the ‘dream’ there is a harsh reality, very harsh indeed, which will need to be dealt with on a daily basis: days of 16 hours non-stop for 8 months of the year, difficult physical work, rain, snow and mud, illness and death of the animals, all that for little money and the need for very large investments.

Yurts on the farm

My idea is to re-connect us to nature, to life and its cycles, to simple and fundamental elements, to find back the feelings we have lost by taking distance from the things we originate from. Farming is one way to achieve this, because the relationship with animals inevitably brings us closer to our humanity.

My idea is to work with animals (sheep and horses mainly in my case) and to share those feelings and relationships with people who would like to experience them as well by proposing a number of different ‘yurts on the farm’ (sort of B&B under a Mongolian type of tents) formulas, through which you can come and stay and contribute to our activities around the sheep, the horses etc.

The first major step is to grow a liveable dairy sheep herd whose milk is transformed into yogurts, desserts and cheeses sold nearby to ‘hives’ or a little further to organic shops.

We have had the great luck to be able to buy a piece of land. Now we must build on it from scratch - we need: a sheep-house, a cheese-making facility, then later on the yurts and sanitary facilities for the holiday-makers.

If we add to this the tractor, machinery for making hay, the herd, the equipment ... it all makes for a very large amount of money which we have had to borrow from the bank already.

The first year of activity was very tough since I was starting from nothing. So I ‘squatted’ a corner of another’s sheep-house, and a little further also a corner of the cheese dairy (thank you to the association le Chant du Pissenlit) and used corners in my own home, sometimes the kitchen etc . sometimes having to make impossible acrobatics to be able to follow the very stringent food & safety regulations by the book. I have done this for one year, but I can not go on like this. (In the meantime however, our products have been very well received by customers/tasters, who have been asking for more!)

Today the ewes are ‘full’ (which means that they met the ram) and the first ones will give birth in January for their second milking season.

Last summer we (well, mostly my man) were able to start THE building work: nestled in the mountain (slightly levelled by the excavator ) a wooden sheep-house, probably the most beautiful sheep ‘hotel’ in the whole of France ...

Yet despite the hard labour and sweat of my man, friends, neighbours, parents, children, in-laws and parents of friends, it has cost us dearly and today we no longer have the means to complete the cheese transformation unit - worthy of the name (which complies with the regulations and in which it is convenient to work, which is insulated and clean) .

The cheese-making is and should be our main activity and people expect our yogurts and cheeses. However the snow may appear a little too soon and the bank is not willing, at this point, to extend our loan further. So here we are: please HELP!

That is why I turn to you and all of those who do not want or can not live our lives but who think it's important to live it, for many reasons: because we produce healthy food without passing through the agribusiness, we recognise our animals as animal-colleagues and not just production machines, we contribute to keeping life in the mountain – it is isolated but so beautiful (especially for the holidays! ), we work respectfully a ‘not so rich’ land etc.

As you can imagine, I like challenges. So to name but a few, there is first the Big Loan in the bank, the one which makes you wake up at night, despite the subsidies (from the region, Europe) and other financial entries. Secondly there are the sheep. I could not have chosen the breed of sheep simply because they produce a lot of milk. No, no, no: I did not find that breed beautiful (there is an important aesthetic aspect to this job) and then they said ‘she is very difficult, she has big needs, she is never satisfied.’ So I chose a ‘local’ breed of sheep (and yes they are from the Pyrenees): rustic and able to survive the often harsh conditions. On this aspect I have been a visionary because the conditions in our idyllic location are: the mountain (1000 m high), where it is always 8 degrees less than 600 m below - a 20 minutes’ drive away (one gets used to it, even if it is a little depressing to start with), snow (for a good 3 months in 2013, it's nice but I'm not yet used to that), 1h30 by car to get to the next (small) city (so if you have not bought the right size screws, you get a little cranky). Fortunately there are many benefits, the right sheep breed was crucial, one ready to do battle with the elements, not sheep wanting to get too comfortable. But it has very quickly become clear that they do give much (much) less milk than the breed that I did not find attractive.

As I am rather eager to cumulate difficulties, I also chose to do a lot of pastures (it takes time), to allow the lambs and their mummys a few days together (instead of separating them from birth in order to maximise the milk) and then to raise the lambs myself (that also takes time), the ecological packaging (for examples glass jars, which are more expensive), to be organic, to be autonomous from the feeding point of view which means making hay, alfalfa and all the rest (one month on the tractor). All this is nice, I made all these choices by deep conviction, but it does not make life easier.

Fortunately I have on my side my man, neighbours, friends, competitor-colleagues-friends, and patient children. THANK YOU to all.

This brings me to a brief description of our small village where we thankfully landed: the hamlet of Caillens. Twenty five inhabitants (generous count) and with all the children. Four organic farms (covering all of the land), a great atmosphere of mutual support and exchanges. Maybe one day a republic.

So I do not complain, I am very happy, I am just short of € 9,850 to achieve the first step of my project (the second one being the project of yurt accommodation) and be able to make my yogurts and have people enjoy them, without feeling the banker’s breath in my neck every second of the day.

The money raised will be used to develop the cheese-making unit (before the snow with a little luck) so that we can use it to make these nice and creamy yogurts and the mountainous cheese typical of the Pyrenees. So practically this means: wooden walls, insulation, the tiling of the walls and floor, a bit of plumbing and electricity, windows and doors, and a radiator.

Your contribution will also help me feel useful, confident and full of love to give to the products I 'll make !

It will also allow us to create links between us in the mountains and you in the cities, unfortunately so far ...

A wink and an amazing sense of gratitude

A big thank you and the picture of the first lamb of the year sent to you by email (January ) + a pillow out of the wool of our herd + a visit of the hamlet: the four organic farms and the tasting of the products we produce.

The christening of a young ewe (you can choose her name, regularly receive photos from her and will (later) be sent ‘her’ first cheese (Tomme bio 1kg approx)