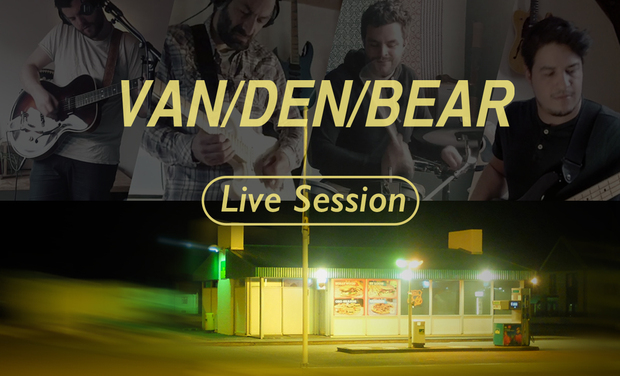 This fundraiser aims to highlight the second EP of our band van den Bear Somewhere the trains are on time released at the end of March 2020 by giving it a second life in the form of a filmed live session.

Between March and December 2019, van den Bear produced, thanks to a crowdfunding 200% succesfull, their second EP Somewhere the trains are on time. This was followed by a promotional campaign - including the release of a video clip, planned concerts, press reviews (Luminous Dash) - for a planned release, with distributor Freaksville Records, for March 26, 2020.

A week before the release of the EP, general lockdown was declared in Belgium.

Despite the participation in various events set up online by the cultural sector, the release of the EP was (like the entire cultural sector) dramatically impacted by the pandemic and went almost unnoticed.

Our goal now is to organize a live session, during which the band will play the entire EP, which will be recorded and filmed by a team of professionals (video technicians and sound engineers), in a private space transformed into a recording studio. In order to give a second chance to the songs released in March 2020, this session will be broadcast as a video performance and a "new" EP in its own right.

Acting as the closest thing to a concert in the current situation, the session will give a new flavour to the songs, by reinventing them in part. The release of a new EP containing the same titles as the one released during the confinement - this time increased by a video - would be planned one year later.

It will be a second chance for a missed opportunity.

The result will be a new object, but nevertheless a witness of what stopped in March 2020.

Finally, the objective is also to support actors of the cultural world in Belgium, both technicians and artists, by carrying out an ambitious project, with a budget that will allow the various participants to be remunerated at their fair value in a year in which they have all been struck by - at times - the total halt of the cultural sector.

Here is how the funds will be allocated:

The video production will be taken on by:

The people that will be involved in the project:

Song for a future vacation CD

A limited edition CD of the live session

Somewhere the trains are on time last copies CD

T-shirt "Somewhere the trains are on time" (Mens/unisex)

T-shirt "Somewhere the trains are on time" (Womens)

Flask "Somewhere the trains are on time"

VINYL Somewhere the trains are on time

A 1-hour session with singer/guitarist/sound engineer Antoine van den Berg (teaches at SAE Brussels, has a studio, ...). Choose the topics you would like to adress during the lesson, from beginners to advanced! Topics can range from songwriting to recording and mixing techniques, use of DAW for beginners, or "how to get the most out of your guitar pedals"... CLASS IN FRENCH OR ENGLISH via zoom

A 1-hour session with our drummer Arthur Ros (Belgium National orchestra, teaches in many academies,...). Choose the topics around drumming you would like to adress during the lesson, from beginners to advanced! CLASS IN FRENCH OR ENGLISH via zoom

A 1-hour session with our guitarist Vinch Ricotta (Camping Sauvach, teaches at 1234asbl,...). Choose the topics you would like to adress during the lesson, from beginners to advanced! CLASS IN FRENCH via zoom

Be part of the audience

For the fan who also want to learn: the live session CD + Hand-made T-shirt + HAnd-made Tote Bag + 2 sessions of 1 hour with one of us

Free entry to any concert of van den Bear for eternity