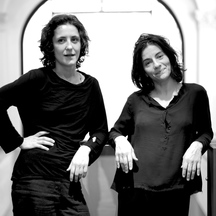 Johanne Saunier: Johanne Saunier has been a member of Anne Teresa De Keersmaekers’ contemporary dance company ‘Rosas’ since 1986. As a lead dancer she took part in famous choreographies such as Bartok/Mikrokosmos , ‘Rosas danst Rosas’, ‘Achterland’, ‘Mozart Concert Aria’ etc … . As a senior dancer, Johanne Saunier has since 1995 been teaching at ‘Rosas’ dance academy P.A.R.T.S. There she works together with young dancers and form them in the spirit of Rosas dancing techniques. Among them came out Sidi Larbi Cherkaoui, Mette Ingvarsen and many others. Since 1998 Johanne Saunier formed JOJI INC, together with Jim Clayburgh one of the founders of the New York based ‘The Wooster Group’. With JOJI INC Johanne started to make her own choreographies for which she later received the Bagnolet Award. Her renowned 4 years project Erase-E (X) was an ongoing project she created in collaboration with diverse artists such as The Wooster Group , Anne Teresa De Keersmaeker, Georges Aperghis, Kurt d’Haeseleer, Isabella Soupart and toured for 4 years. Her work with voice is in different contemporary operas with Guy Cassiers Lear, Francois Sarhan and the Diotima Quartet, Line of Oblivion with Arturo Fuentes, Luna Park with Ictus Ensemble and Aperghis in IRCAM. She is also collaborating with prestigious operas such as Opera de Lille, Nancy, Garnier and Théâtre des Champs Elysées in Paris etc. She recently choreographed Nathalie Dessay in ‘La Traviata’ in renowned festival Aix en Provence. Ine Claes: Ine Claes is formed at the ‘Amsterdamse Hogeschool voor de Kunsten’. Ine is a talented young professional dancer, combining choreographic precision, energetic expression and elegance. As a professional dancer she has been performing at Johanne’s dance company ‘JOJI INC’ since 2010. With JOJI INC they recently were invited to perform the well reviewed choreography ‘Modern Dance’ in Paris, which was created in collaboration with circus artist Maturin Bolze. As Ine is interested in cross artistic collaborations, she has worked together with Jacques Urbanska (multi-media artist), Sara Claes (photography), Thomas Israel (multi-media artist), 74Miles Away (electro ensemble),Le Grand Bateau (pop band)… . With music ensemble Tabarnack she did a dance-solo performance ‘An eye for an ear’. Another piece of Ine ‘Riptide’, staged in water with live music by Sara Claes premiered in Nuit Blanche 2012 and was shown during Fringe Festival in Stockholm. Meri Pajunpää: Meri Pajunpää is a Finnish dancer who to received her dance education at the ‘Amsterdamse Hogeschool voor de Kunsten’. After graduating Meri danced for famous choreographers such as Itamar Serussi, Fransesco Scavetta, David Zamboro and Vera Tussing. She performened in many international festivals and performances, with choreographies such as ‘Surprised Body project’ (Scavetta), ‘Phenomena’ (Serussi) and ‘T-dance’ (Tussing). 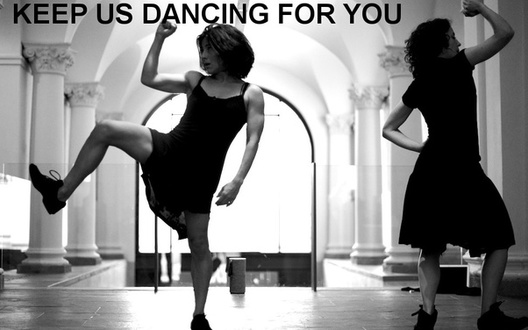 Keep Us dancing for You