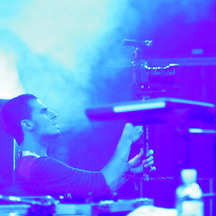 Laurent Pasquier is an author-screenwriter, a director and a cameraman. Native of Lyon, he begins as photographer on Paris, in parallel of his studies at the ESRA (school of filmmaking). He worked for press, event, but also fashion or for institutions, and at the same time as cameraman on shootings of fictions, ads and clips. After his studies he started into the realization of documentary movies and specializes into the underground cultures, like with his first movie about the oldest artistic squat of Paris, "La Miroiterie" an famous around the world. He also started a new long and ambitious project: realize the first documentary full-length film on the universe of "Bass music", a culture of electronic musics, born in England in the beginning of the 90s, which roots is a mixt between Afro-American musics, Jamaican musics and English Raves. He spends more than three years through Europe to meet and film the various protagonists who form this musical movement. In parallel he created his own structure, Art Summer Production, with he organizes multidisciplinary cultural events which mix the audiences by combining culture and party. He also livens up conferences on documentary filmmaking and about "Bass music" and showing somes movies extracts of his project in festivals, entertainements and at University. His project on "Bass music", takes several forms today, becoming at the same time: a documentary movie, a documentary web-serie, as well a photography exhibition, to allow the public to experiment and to discover this culture musical under miscellaneous forms. Finally he also writes fictions, in particular a web-serie which follow a character who evolves in this universe of "Bass music". This series, was selected for the 20th edition of the International Festival of Screenwriters of Valence.