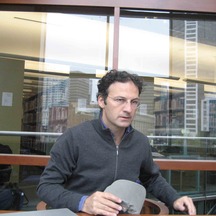 Marco Nicoletti lives Paris since 1993. There , he directed and co-produced three short-movies (“Tout va mal” selected in Cannes and Venise), and feature, “Regarde-moi (en face)”, 2003 (released in theatres and Tv-TPS). He also shot, "O Poeta" feature film distributed by Elo Company of SP. Marco Nicoletti is also a photo-reporter and a documentarist who did 20 films about social issues. His documentary about the gengs of El Salvador and Guatemala, have been released on tv many times.