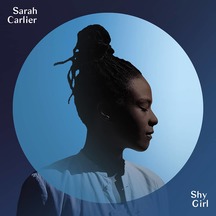 Sarah Carlier is above all a voice: warm and captivating, full of light. Not forgetting her smile, with her disconcerting simplicity. Sarah Carlier has been composing and writing since she was 16, inspired by Nina Simone, Jimi Hendrix, John Mayer, Richie Havens, etc. Revealed on the Internet by Akamusic, she composed her first album “For Those Who Believe” in 2011, first appeared on stage and performed several first parts for prestigious acts such as Yael Naim, Emeli Sandé, James Morrison and Amadou & Mariam. The highlights of the first album “Backstage” and “Tenderness” received wide radio acclaim. Moreover, Tenderness won the “Belgian Tube of the Year” award in 2012. In March 2013, Sarah was in concert at “Studio1”, the prestigious Flagey Concert Hall, where she performed acoustic versions of her first album, as well as several cover versions shared with various artists, including a string quartet. A live album was recorded. At the end of 2013, Sarah Carlier began composing her second album “SMS” and began the first recordings. She chose the studio SynSound not only for its technical qualities (analogue recording) but also for the human qualities of Dan Lacksman, its director. The album is based around a new team. Kalema (her father), artistic director of the album and musician, Boris Tchango (Drums), Thierry Rombaux (Bass), Laurent Stelleman (Guitar), Filippo Zola (Accordion), Koffi Sandjo (Keyboard) and Gregory Houben (Brass).