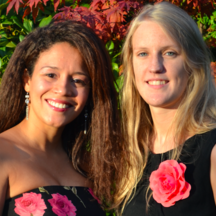 The DUO ROSA was born from a human and musical encounter between Stephany Ortega (soprano) and Léna Kollmeier (piano) while studying at the Royal Conservatory of Brussels. Their common background, affinities and musical goals allow them to perform with ease the refinement of the traditional repertoire and at the same time to take up the challenges of the contemporary music... See more

The DUO ROSA was born from a human and musical encounter between Stephany Ortega (soprano) and Léna Kollmeier (piano) while studying at the Royal Conservatory of Brussels. Their common background, affinities and musical goals allow them to perform with ease the refinement of the traditional repertoire and at the same time to take up the challenges of the contemporary music or even to explore the "world music" collection. The duo had the opportunity to perform his program "Passionately", a travel across Europe and Latin America through the art of song, in Belgium and Luxembourg, especially at the festival "Musique dans Vallée" in Attert, at the "Claviers Magiques" in Waterloo, at the "Konscht-Millen WAX" in Pétange and other concerts in Bruxelles, Dilbeek, Hellange and Luxembourg City. This year, the duo propose a new program: "Tonight at the opera!", traditional and elegant, a compilation of the most beautiful opera arias. In 2015, the DUO ROSA had the chance to work with composer Wolfgang Rihm and to perform, with big success, some of his pieces at the "Royal Theater La Monnaie" in Brussels, Belgium. STEPHANY ORTEGA is a classical singer (soprano), choir conductor and pianist. Born in the Dominican Republic, she became dual national by naturalizing in Luxembourg. She graduated with distinction with a Master of Arts in classical singing at the Royal Conservatory of Brussels; a Prix Supérieur in classical singing and a Premier Prix in piano at the Conservatory of Luxembourg. She also completed a Bachelor in music education at the Autonomous University of Santo Domingo, where she graduated with distinction. As a soloist she sang throughout France, Germany, Canada, Dominican Republic and Luxembourg, especially with the "Philharmonic Orchestra of Luxembourg" at the Philharmonie of Luxembourg; with the "Royal Symphonic Band of the Belgian Guides" at the Conservatory of Brussels; with the "Ensemble de la Chapelle Saint-Marc" at the Centre des Arts Pluriels singing the role of Almirena in Händel's opera “Rinaldo”; at the theater festival Ruhrfestspiele Recklinghausen and at the Grand-Théâtre de Luxembourg alongside the Oscar-winner Maximilian Schell, among others. She received the prize "Excellence in Music” awarded by Baskin Robbins; a bronze medal at the european competition “Jeunes Solistes” and the prizes “Lerminiaux” and “Vindelinck” both for her merits in classical singing, as well as the "Prix Servais" awarded by the Ministry of Culture of Belgium. She currently works as a singing teacher at the Conservatory of the North in Luxembourg and a s a choir conductor at the European Institute of Choral Singing and at the Union Grand-Duc Adolphe. LÉNA KOLLMEIER, born in Belgium, began to study piano at the age of five. She attended the Academies of Arlon, Bastogne and Auderghem and, at the age of fifteen, she was admitted in the Royal Conservatory of Liège as a young talent. In 2009, she was awarded with the First Prize in the piano competition "Dexia Classics" and performed at the "Royal Theater La Monnaie" in Brussels. In 2013, she received a Bachelor of Arts in piano performance with distinction at the Royal Conservatory of Liège in the class of Etienne Rappe. She took masterclasses with Dominique Cornil, Natacha Zdobnova, Dana Protopopescu et Boyan Vodenitcharov. As a soloist Léna has performed at the "Château du Pont d'Oye" in Habay-La-Neuve, at the festival "Mai'li Mai'lo", and at the "Festival Royal du Juillet Musical" in Saint-Hubert. In 2010, she played the Mozart's Concerto No 20 with the orchestra "Les Archets du Sablon" and the Schumann's Concerto with the orchestra "Estro Armonico" conducted by Dominique Bodson. Becuase the contemporary music takes an important place in her repertory, she performed at the "festival du Clavier Contemporain", at the Conservatory Frédéric Chopin, a piece composed by Patrick Loiseleur. Recently, she played the first part of Jodie Devos's concert, 2nd Singing Prize at the "Queen Elisabeth Music Competition" in 2014, held at the "Maison de la Culture d'Arlon" in Belgium. At the present time, she is finishing her Master of piano at the Conservatory of Brussels in the class of Daniel Blumenthal.