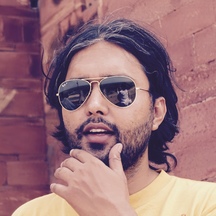 My name is Vaibhav Vashisth (VV). I'm a trained theatre actor, a certified Sivananda Yoga teacher and an independent filmmaker. I have made two short film so far ''Dance with a strange'' and "illusion". Currently Ive finished filming the first part of my 90 minutes docudrama film "The Healing Highway" in the Himalayas and now trying to raise funds to shoot the second part of the film in the Indian Ocean.