Zohar Wexler Born in Haifa, Israel in 1971, he studied theatre at Columbia College in Chicago and then in Paris with Oscar Sisto, Florent School and the University of Paris III. In 1998 studied at the National Conservatory of Dramatic Art in Paris as a foreign student. He founded in 1999 his theatre company Le Reseda and staged Jehu by Gilad Evron. He directed the actress and Yiddish singer Talila in Yadja by Blanca Metzner and Dan Wolman. In 2010 he acted and staged his show Kichinev 1903 at the Maison de la Poésie of Paris. He staged readings and also assisted in the staging of readings of palys by Gilad Evron that he translated: The Devil from Chatillon at La Mousson d’été festival and the Comédie Française, Sky at Theater Ouvert and Ulysses on bottles at the Rond Point theatre. As an actor, he played the contemporary repertoire by: Horowitz, Fassbinder, Van Louhuizen, Kacimi, Kane with directors such as Alain Timar, Alain Rossett, Michel Bourstein, Stephanie Correia, Julien Feder, Stéphane Braunschweig, Deborah Warner, etc.. He was also the artistic assistant to Charles Tordjman for two plays by Jean-Claude Grumberg : Towards you promised land, dental tragedy and Me, I do not think so and also the play Fabbrica by Ascanio Celestini. In films Zohar plays under the direction of Sylvain Estibal in the film When Pigs have wings and Elie Wajeman in Aliyah. The text of Kishinev 1903 is published at Editions space d’un Instant and the play Ulysses on bottles in its French version (Ulysse à Gaza) in published at les éditons Theatrales. 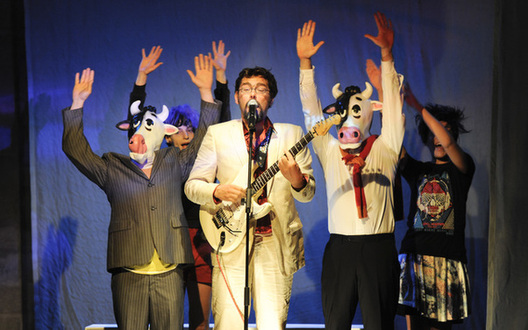