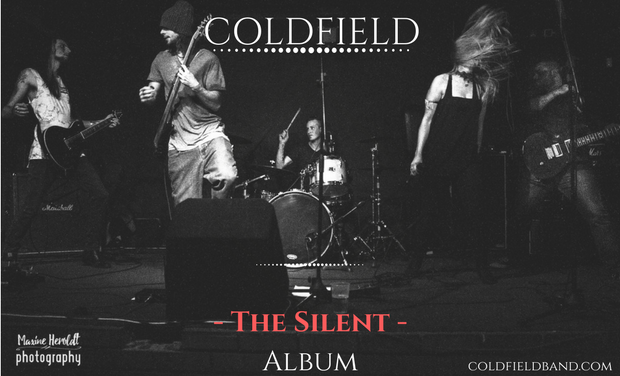 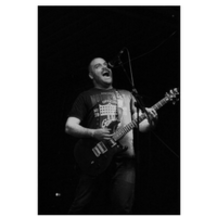 COLDFIELD was started in 2015/2016 by bassist/guitarist Damian 'D.C' Coldfield.

Having been a part of acclaimed local and international acts such as The Awakening (USA), SubRosa (SA) and Nova Rise (SA), D.C. decided to start up a side project with a cache of over 15 songs written over the years.

This QUICKLY became his main project.

Check out our track -- NIGHTMARES

Plans for a full length album was side tracked due to financial constraints, BUT the band continued tracking and releasing singles, including 'Dark Skies' and 'Feel Alive'

Here's a link to our FEEL ALIVE MUSIC VIDEO

This was not enough for the guys and Sharne, and soon after, pre sales for an E.P. was set in motion.

With the help and support of epic fans, COLDFIELD tracked 5 tracks total between B Sharp and ParkLand Studios.

In between it all the band recorded footage for and compiled an E.P.K. to share our history, writing sessions and recording process with our fans -- Check it out below!

Check out some of them below.

Texx and The City (Cape Town)

Currently busy prepping for a local tour to promote the E.P., COLDFIELD has its sights set, yet again, on completing a full length album.

This time though, we'd like to pose the question to global rock music enthusiasts - Do YOU want to be part of OUR story?

If you want to get to know the band a bit better, then check out our social media links or our website.

Here are our most active pages:

We hope that you'll become part of the COLDFIELD family - by contributing to our project, you'll be a part of our future as well as a part of our history.

If you can't contribute, but like our music and what we're trying to achieve, then please do us a solid and SHARE this project with your family and friends.

Why be a part of funding our Album?

Because you LOVE hard hitting rock, with catchy melodies that's executed with precision by a band that's comprised of epically passionate and skilled mussos who love creating material for YOU GUYS out there!

And the obvious - Our project REWARDS ;)

Why not just fund it ourselves?

Well, being an independent band, with no label or outside backing or Lotto winners in the band, we have to get creative! And here we are!

Because we're not greedy or sneaky - We just need the amount needed to complete the album as well as distribute, brand (new photo shoot to revitalize image) and promote it.

** We are basing our Goal Amount on the services needed to produce the album.

Banking fees, transfer costs etc on the funds will be handled separately by the band, so that  we don't transfer the costs over to our contributors.

Who will access to the money/distribute the funds to the relevant people involved?

The band founder/manager - Damian Meyer a.k.a/p.k.a  Damian 'D.C.' Coldfield will be the only person to have access to the account, in order to pay for everything in the budget. Meticulous records/receipts will be kept for every aspect of the album process, as the band has an open book policy between all the members in regards to 'band income' & expenditures, including any music/merchandise sales, gig fees, fund raising, online ad campaigns, promotions etc.

Where will the album be tracked & mixed?

The lead singles off of the E.P. was tracked and mixed at ParkLand Studio by Johan Heyns and Conway Van Staden. The specific production team was a perfect fit for the band and the sound that we're trying to establish. We would track at ParkLand and mix the album, hopefully by latest August 2017, for a possible October release.

Where will the album be mastered?

Conway Van Staden mastered 3 tracks off of our debut E.P. at a separate facility.

As we had the chance to test the tracks on various systems, to establish the perfect balance and overall dynamics on the tracks to compliment the mix, before we finalized the master, we would like to work with Conway again to master the entire alum to the same standard - that will mean re-mastering the previous tracks to match the 6 new tracks on the album and get overall final product moving smoothly from track to track.

How will the ad campaigns be run?

We have used Facebook, Instagram and Reverbnation ad campaigns with great success previously to promote our E.P., but with limited funds. We will run a dual FB/Instagram and Reverbnation ad campaign with a 20 sec video with all the details as our primary element, as videos prove to be more engaging and garner more overall actions. It's not a high budget campaign, but it ads stability to the to the reach of our normal promotion, individual social media reach and other forms of promotion.

Who will handle the local radio plugging/promo duties?

Warren Gibson is the undisputed choice, due to his extensive career in the industry, local and international contacts and affordability for the average indie band. We will get weekly reports from Warren in regards to play listing and other successful submissions.

Are the other expenditures in the budget necessary?

Tunecore - Tunecore will be our online distribution agent for the album - they will handle all submissions to the major online store including iTunes, Google Play and Amazon. We'll also add €5 towards Shazam for the year.This will make it easier for fans to find the album online via radio play, videos etc.

Photo Shoot - Image is everything in regards to first impressions, even before the buyer hears the 1st bar of music! We will use Maxine Live for our shoot, along with renting studio space from a local studio via the owner (Johan) of Lensrental.co.za.

Website Upgrade - Our current website only allows for a certain list of features. The minuscule fee €5 per month boost will give us a year's worth of access to more pages, higher storage capacity, access to Soundscan to track radio play/rotation and more.

What will happen if we surpass the goal amount?

We have physical distribution options that we can pursue, IF the finances were there, but as our main focus is digital distribution, it is only an option if more funds were at our disposal.

There is no such thing as too little support in this project! 1€ will help us towards our goal! For your contribution we'll send you a digital DL link to our latest single 'Dominant' and a MASSIVE THANK YOU on our social media!

For your AWESOME and generous contribution of 5€ we'll send you a digital copy of our debut E.P. 'The Silent' and a HUGE thank you from our social media! You guys Rock!

For your hard earned 10€, we'll send you a digital copy of E.P. and once it's finished, a digital copy our FULL album, AAANNND a THANK YOU in the album liner and 'Making Of' video of the album. 200 of these rewards = our project funded, so feel free to buy some for your friends and family! Spread the HARD ROCK love!

For your contribution of 25€ well send you a custom made, all cotton COLDFIELD vest (black or white) and a digital copy of our E.P. and once it's finished, a digital copy of the full album. Along with this, you'll still be a part of the cool kids and receive a THANK YOU on our social media, in the album liner notes and in the 'Making of' video on the album. 80 of these rewards = our project funded, so feel free to buy some for your friends and family! Spread the HARD ROCK love! * Shipping of $5 by contributor

For your INSANELY epic contribution of 50€ you'll receive an all cotton COLDFIELD hoody (black, white or grey), a digital copy of our E.P., a digital copy of our Full Album, once it's done, gracious and humbled THANK YOU shout outs on all of our social media pages, the album liner notes, 'Making of' video AAANNDD a personal FACETIME or SKYPE chat with the band, so that we can thank you in person! 40 of these rewards = our project funded, so feel free to buy some for your friends and family! Spread the HARD ROCK love! * Shipping fee applies

This is the BIG one! A unisex (for guys or girls) all cotton,merch package, consisting of: * Hoodie (black, gray or white) * Unisex Vest or T-shirt (black or white) or Cap (black) - choose one. * Limited Edition embroidered COLDFIELD jacket patch. + A digital copy of the current E.P. + A LIMITED EDITION branded USB with album (once completed), containing all our videos and a special mini acoustic performance video. + A Skype or Facetime chat session with the band. + A shout out on the 'Making of the album' video/E.P.K +Thank you in the album liner notes.