From Syria, with Love 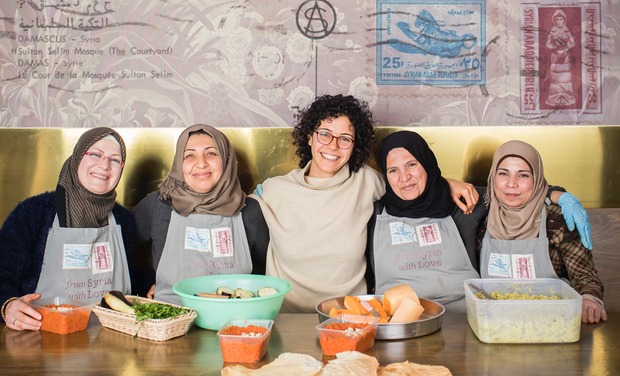 From Syria, with Love

From Syria with Love: food for the soul... coming from the heart

It all began with a dream, a dream to change the perception of the word "Syrian Refugee." A word that has flooded the media and people's minds to the extent that it always brought a negative connotation. Rarely did anyone know anything about Syria prior to the war.

"I couldn't stand the pity and sad eyes when I told people I was from Syria. There had to be a way to show the hidden gems of Syria, the gems the Syrian people had brought with them from across the Mediterranean.”

Back in September 2017 Yara, a design consultant, come across four women who had a lot more than the words Syria and refugee; they shared a passion: cooking Syrian food with love.

It was not long before this passion become a social enterprise called "From Syria with Love", a catering company that aims to empower and give a purpose to Syrian housewives who now call Belgium home. The mission goes beyond empowering and sharing food; it's a bigger vision to blur the lines between the locals and the new comers.

After our great success the past year, we decided to commit to a fixed location where we will continue our mission and prepare daily meals, organise cooking workshops, and cater bigger events.

Our Team: ​​​​A devoted team of lovely Syrian housewives

Head Chef Sabah from Aleppo is 44 years old and has 2 children. She has been in Belgium for 1,5 years. "I have never felt more proud to be a Syrian, making people happy."

Chef Ahlam from Homs, she is 34 years old and has 4 children. She has been in Belgium for 2 years. "Cooking has become my profession, which is the best thing that could've happened to me."

Chef Abeer from Damascus is 33 years old and has 2 children. She has been in Belgium for 1 year. "I never imagined that I would grow to love Belgium this fast."

Chef Deeya from Aleppo is 36 years old and lives by herself. She has been in Belgium for 2 years. "When I met the ladies and saw them cooking, I couldn't hide my enthusiasm!"

We were blessed to find a humble location to rent in Gitschotellei, Antwerp; however the store is empty and needs a reconstruction in order for it to be suitable to contain a professional kitchen under the rules and regulations of the FAVV.

If we are lucky enough to reach our goal then your kind contributions will go to:

1. The reconstruction of the store
3,000 euros to renovate the store *pipping, electricity, water, gas...
1,500 euros for material to furnish the store *flooring & ceiling material, toilet, lavabo...

Thank you in advance for everything :)

A huge thank you / Shukran with your name mentioned on our social media :)

A delicious lunch for 2

A dynamic cooking workshop for 8 people :)

You are more than welcome to book us for a private evening for your special event for up to 30 people :)