The aim is to finance the new edition of the book INTIMISM (disiecti membra poetae) by Paulina Mikol Spiechowicz that includes NEW POEMS. 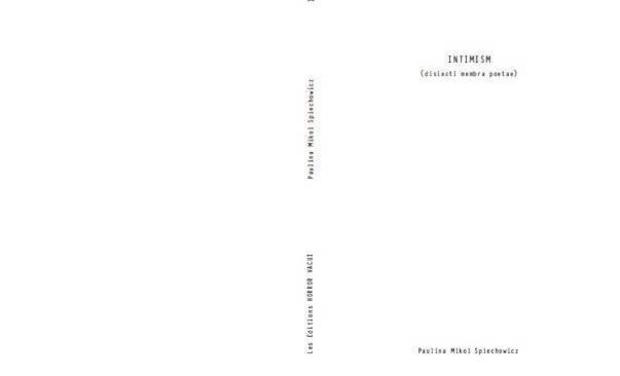 The aim of this crowdfunding is to finance the new edition of the book INTIMISM (disiecti membra poetae) by Paulina Mikol Spiechowicz.

This new edition will include several NEW POEMS written by Paulina during the years 2012-2013.

The first edition was printed in Paris in november 2012.

Paulina Mikol Spiechowicz is a poet and novelist. She was born in Krakow (Poland) in 1983. Her family moved to Italy in 1987. She studied literature and history of art in Rome, Berlin and Paris. Since 2006 she lives in Paris. She completed in May 2013 a PhD dissertation at the Ecole Pratique des Hautes Etudes on an interdisciplinary subject concerning the analysis of space and architecture in literature and poetry.   Since 2010, she has published in Italy a book of poems (Studi sulla notte, Edizioni Ensemble) and short stories for Giulio Perrone Editore. She collaborates with different literary international reviews.

Intimism (disiecti membra poetae) is an experimental book of short & long poems. Mostly written in English, it mixes other languages: Italian, French or Latin (as in the subtitle), effecting as a kind of reminiscence of Babelic Times or our Modern Times of GLOBAL Politics ( we live now in a time when new generations speak  different languages !)

The poems appear boned and fragmented. Each word is semantically a complex universe, full of meaning. The page plays with the feeling of fullness and emptiness produced by the harmonic modulation of words and white spaces on the page. The fragmented pieces of words and spaces, put all together, find a coherent digressive structure. The integral poem appears as the body (a fragmented and dismembered body) of the poet.   It is a unique book.

You have to experience it !

Everyone has his/her own way of reading. Some begins by the end, some by the begining or by the middle or a page by chance. It depends of our moods sometimes!

Anyway, you have to TAKE YOUR TIME to read and experience the poetry of it.

Les Editions Horror Vacui were founded in November 2010 in Paris by Melanie Sweeny (conceptual artist &  writer). Their ambitions are to publish radical and pertinent works of philosophers,  artists, poets and writers.  (www.editionshorrorvacui.com)

The term of horror vacui originates from the Latin and signifies the fear of emptiness.

- TO SPEAK WITH WORLD by Melanie Sweeny (Conceptual artist and writer)

There are many books to be published in the near future with strong artists coming from different countries, different horizons.

All the four COLLECTOR BOOKS (published by Les Editions Horror Vacui) have been bought by the Centre Pompidou this year 2013 to enrich their BIBLIOTHèQUE KANDINSKY : Library of rare and unique artist books.

This year, we  received a very delightful email from Christian L. , in charge of the permanent collection of Artist's Books of CENTRE POMPIDOU - Paris/   Christian L. wrote to Les Editions Horror Vacui :

" On behalf of the Kandinsky Library (Centre Pompidou, Paris), i wish to express all the gratitude to Les Editions Horror Vacui for having sent us your four latest publication : DEAD CITIZENS, TO SPEAK , INTIMISM & PLAN DE EVASION ( all limited edition). Your collector books will enrich our collection of Artist Books, which is very known around the world for its pertinence and excellence."

Les Editions Horror Vacui represents a raw and strong spirit. Artists are encouraged to fully  express themselves through their own words -even in various languages if they wish-. The  publishing house encourages for radical expression through different mediums (writing, collage,  photography, etc).

Most of the books are to be translated in English and French (and/or Spanish, Italian, Polish). However, some books - originally written in several languages - are not to be translated due to the poetic  specificity of the vocabulary. For example, the book INTIMISM (disiecti membra poeta) by Paulina Mikol Spiechowicz has been written originally in three languages (English, Italian, French, and some Latin). The use of Latin expressions or Italian / French words has a specific meaning and we could say : a specific color. The use of different languages makes the text spicier, more colorful and babelic.

The disposition of the words on the white page is also very important. The empty space around the words is not hazardous. On the contrary, it is something well thought by the author and the editor. Times of silence and contemplation are necessary to fully understand the impact of words, their significance into the empty space. You must TAKE YOUR TIME to read and reflect.

Let's end up by this nice quote :

"Mallarmé, the most coherent esthetes of the XIXth century, declared that  everything in the universe exists to succeed in the realisation a book." *

Extract from the Introduction of the book AT THE SAME TIME by Susan Sontag (2007) /  Translation by M.S.

The collect will serve :

- to finance the printing of 200 postcards ( poems on photography: artworks realised by the author & edited by Les Editions Horror Vacui) (100e)

- 5 prints on SILVER PHOTOGRAPHIC PAPER of the poems/images (format 20cm x 30cm) (limited editions of prints, all signed by the author) (200e)

If there is more money, we will use that money:

- to reward the graphic designer (150e more or less)

THANK YOU for your participation. You will receive 1 postcard with a poem by Paulina Mikol Spiechowicz.

THANK YOU for your participation. You will receive a set of 10 postcards with poems by Paulina Mikol Spiechowicz.

THANK YOU for your participation. You will receive a set of 15 postcards with poems by Paulina Mikol Spiechowicz.

THANK YOU for your participation. You will receive a book (limited edition, NOT signed) and 2 postcards.

THANK YOU for your participation. You will receive a book (limited edition and SIGNED BY THE AUTHOR) and 10 postcards.

THANK YOU for your participation. You will receive a book (limited edition and signed by the author) and 10 postcards and a new poem written by hand by the the author.