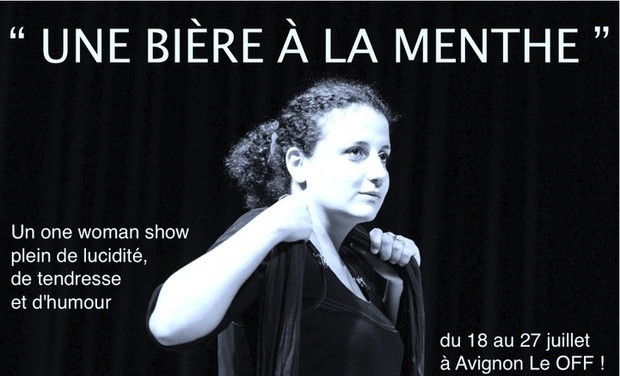 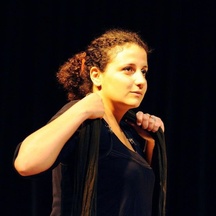 →→One woman show, played by Saliha Boussedra. Stage director: Jean-  Paul Jourdàa – Text : Saliha Boussedra / Jean-Paul Jourdàa. A host of characters inhabits the stage : the immigrant mother and father and all the other burlesque figures that live or hang aroung by the downtown pizzeria that Sabrina usually haunts. A cultural crossroad, an encounter with History, with other people’s histories and with one’s own history, this play is about lives that resemble ours and that intersect. It’s a modern life fairy tale whose magical characters are the others, a mix of theater and narration, a succession of real life snapshots. The writing is both lucid and filled with tenderness and humor.”

What is this all about? Our play Une bière à la menthe  shall be presented at the Avignon Festival in the OFF section this year. We need your financial support for this enterprise!

Une bière à la menthe is a show that was initially staged in June 2009 in Toulouse.

Une bière à la menthe is a show that tells the story of a young girl, Sabrina, born and raised in a poor neighborhood, who detaches herself from her familiar surroundings in order to explore a downtown pizzeria, where she gets to meet immigrants, most of whom are workers, working intellectuals, former revolutionaries and a bourgeois lady that happens one day to enter the pizzeria.

Spectators witness a sequence of monologues where Sabrina tells of how she sees the world and sketches where the actress incarnates the other various characters. It’s a mix of actual theater and narration.

-Sabrina and her mother

-Zoubir, the owner of the pizzeria

There was a conscious decision to leave the theatrical space empty in order to conjur up the material deprivation that accompanies exile, which is one of the important topics addressed in the play.

The background of the play…

This original piece of writing was also supported by the Region of Midi-Pyrénées, by the  General Council of the Haute-Garonne, the ACSE from the Midi-Pyrénées and the mayor’s office in Toulouse.

On the performances so far :

Une bière à la menthe  was warmly received by the public from its very first performance, which led to a number of NGO’s and independent theater programmers calling on us to perform it again and again. We have been solicited to perform around thirty times (essentially financed by the entry tickets) in about ten different theater venues, mostly around Toulouse.

A few links to some articles on the play:

Why we need to resort to crowd funding :

The  Festival in Avignon is : « one of the greatest theater festivals for independent companies across the world ». As such, it attracts a large and diverse audience, among which different types of theater programmers. July in Avignon is a key period for the programmer and theater managers that scout for new plays for their theaters. This is why being able to perform at Avignon would be a tremendous chance to carry our unique point of view beyond the boundaries of the region of Toulouse to a far reaching audience.

We have already advanced a part of the fee by contracting a few debts that we hope to be able to pay up by your help, as our own funds are very limited.

What will the money be used for?

What will the money be used for ?

The money we hope to raise will first and foremost pay for the festival fee, which is 750 euros. This amount is required in order to :

- pay for a light technician for 10 days

If we happen to raise more than the basic sum, we will put the money to good use in order to:

-pay for the road and lodging

-get a mike for the stage, which will allow for a more intimate performance

Jean-Paul Jourdàa ( co-writer et stage director for the show) : Actor, singer, slammer, author, director, artist coach. With a mother living on the Mediterranean coast and a father on the Atlantic one, he spent his childhood traveling between the Caraibes and the Indian Ocean. He wrote and performed his first in 1982. Itinerant songs... He takes acting classes in Toulouse, then he continues with pluridisciplinar acting classes (singing, theater, dancing) in Paris, Marseille, Avignon, Lectoure. From 1984, he performs with around 15 theater companies in Toulouse, in very diverse genres (classical, contemporary, musical, pantomime, mask theater, dance, urban shows, song).  Having moved to Paris a few years ago, on top of his own performing and authoring activity, he is also directing and coaching artists.

Saliha Boussedra (co-author and actress): After having been a part of several theater workshops as a teenager, I came back to the theater a few years afterwards in order to create this show. I have a master’s degree in sociology and philosophy and am currently working on my PhD in philosophy. I have worked as Philosophy and Sociology teacher in high schools and institutes for Social Workers in Toulouse and the neighboring region.