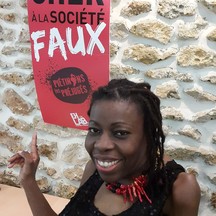 "For me, to explore, accept, educate are a need. As long as the need exists, I'll create to inspire change". My name is Deza Nguembock, founder and CEO of E&H LAB based in Paris. I was Born in Cameroon where I was raised before moving to Paris for medical reasons in the mids 1990 (after-effect of polio that I got at the age of 4). I studied English litterature before switching to e-Business. I started my career in 2004 in the Direct Marketing division of a french group in Paris. From 2005 to 2011, I manage a NGO where I directed different projects (photo, sculpture, dance, music…). I created among others the Aesthetics & Disability concept based on the image to raise awareness on disabled people. In 2008, I joined the planning strategic and consulting division of a design company in Paris. I decided to stop my contrat in 2011 to start my own company, E&H LAB dedicated to CSR. My work is to raise awareness and make sure that companies care about humans through art projects: well-being at work, group cohesion... My subjects are minority groups (disabled employees, seniors, women...) My clients are mostly groups such as Orange, Galeries Lafayette, Gemey Maybelline Garnier, AG2R La Mondiale, Natixis... E&H LAB also develop its own programs such as Piétinons les Préjugés for local governments and general public to change perceptions on people with special needs.