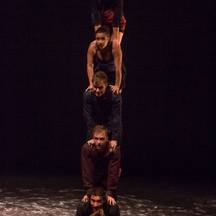 Kaaos Kaamos is a european company based in Sweden, specialized in hand to hand and banquine. A crew of six circus artists from Sweden, Finland, Germany, Chile and New-Caledonia, with a french director, in the process of creating a first show. Johan Sjölund    Someone once asked Johan what he wanted to be when he grew up. As a kid, the choice was easy. He wanted to become a    superhero, who hasn't thought about that. Or to become a chef because you know, food. Looking back on this answer, we can say that he managed to become a weird mix of them both. He is not a superhero or a chef but he does spend his days catching people so they don't crash on the ground. Since this is his job he needs to eat a lot, and thank god, he still has a big interest in cooking. Otherwise his meals would be incredibly boring. Perry Rudolph Perry, the vegan base of the company! He tried a lot of different arts of movement, from breakdance and capoeira to juggling and contemporary dance until he found his destiny: base in hand to hand! He did the circus schools "Die Etage" in Berlin, "ACaPA" in Tilburg and "le Lido" in Toulouse, to get developed his skills in the discipline. Now he is showing the world that plants have protein and he squats forests whenever he can... Erik Glas Erik is the geek of the company, he likes gadgets and problems and once he gets interested in something he tends to lose focus on the rest of the world. He studied circus in "Cirkus Cirkör" in Stockholm, in Tilburg and in Brussels and he has been told to strech his shoulders more times than anyone could count in at least three different languages. Lately he has been teaching his own students, playing amazingly stupid games and telling them to strech their shoulders. Circle of life continues. He hopes to one day be the grandfather with the coolest stories, telling the kids in the neighbourhood crazy adventures like breaking out of a bathroom or sliding down a mountain of cake. Erika Ahola Erika is the other vegan of the company and sometimes she is really the lonely wolf. She needs her own time in the finnish forest where she spent a lot of time growing up (she is almost 150cm). Hugging people is one of her favourite things and she loves berries. During the company meetings she is often the "grandmother", knitting socks or so. When she gets tired she might laugh without a reason for a long time, best training for abs and definetly fun. If you manage to make her angry you better watch out, she might be small but her internal fire can burst out when needed. Mikaela Valencia Veide She started out a bit confused in life until she found circus and fell in love. Aspecially with partner-acrobatics. The sensation of flying in the air convinced her. Since then she has studied in one circus school in Holland and two schools in France, one of which was "Le Lido". She is the talker of the group, no matter what language, she will probably speak back to you. Her emotions rule her life, sometimes... Nowadays, Mika remains confused, but a bit less. Anouck Le Roy Coming from New Caledonia she is not afraid of going up north during the winter, where she discovered snow fights and the pleasure of working in a collective. Anouck graduated from the Academy of Circus and Performance Arts as an aerial cradle flyer and with the help of the group she transferred her skills in to hand-to-hand. She is the technician of the group, interested in lights, tools and everything that involves climbing somewhere. Albin Warrette - Metteur en piste He was born in the north of France, and lives in the south, Toulouse. He splits his time and passions between theater, circus, writing, acting, teaching and directing. He mostly enjoys being involved in collective projects. Exchanges and co-creations are his best motivations considering an answer made in common is the best answer. He teaches in Lido, Toulouse circus school, since 15 years. He is involved in several projects about mixing and combining circus and theater. His main stage orientation is about that: to find links. He writes and directs several circus shows, always trying to dig in to new directions, in order to keep renewing and learning by encounters and exchanges.   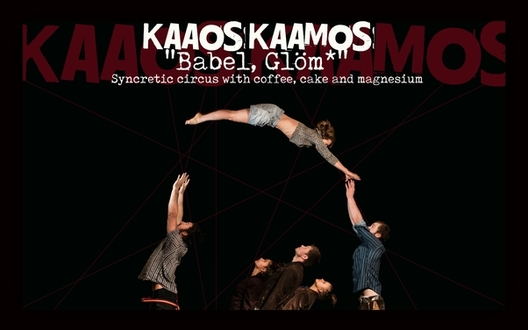