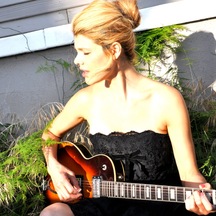 Nadeah is an unlikely artist. She cannot write or practice in front of anyone, including her mother. In the studio she has to black out all the windows so no one can see her sing, and before shows she used to cry in a corner and rock back and forth like a baby. "If people knew how terrified I was to get on stage, to play new songs, to put out records... They would tell me to quit my day job for sure". Despite the fact that she has made 5 albums (one with Universal which was never released, two with UK cult rockers, the loveGods and her debut solo album Venus Gets Even), played over 800 shows and toured the world multiple times with various bands including French hipsters Nouvelle Vague, she still gets extremely edgy before her concerts. So, why music if you are so scared of exposing yourself? "It's like medicine- if I don't play live, I get depressed. If I go two weeks without playing, I forget that I love what I do and that people get pleasure from my music. I really feel like I am home when I am on stage. But before a show, I get all agitated and create dramas. I often cry or argue with people. And then when I play I think, "what the hell was that all about? This is the best feeling in the world, of course I am meant to do this." Besides, I am a firm believer in doing things I am afraid of. To me, fear is an invitation to be courageous, to grow. I accept the invitation most of the time- except in relation to elevators. I don't do elevators". Nadeah Miranda moved to Europe when she was 18, to pursue a career as a model; "I didn't even go to the agency...besides I knew they would ask me to lose 5 kilos and I am incapable of sticking to a diet so I started busking around Europe. It was easier to just do what I wanted to do here as I felt like no one I knew would see if I totally screwed things up". It was whilst busking outside a Paris cafe that she met long time collaborator Art Menuteau. They moved to the UK, created the loveGods and then supported Nick Cave, Franz Ferdinand, Kelis and Tim Booth (James), played Glastonbury too many times to count and toured with the Fun Lovin' Criminals. The loveGods won BBC Radio One's best unsigned band 2004 and they released 2 albums independently (Between Dogs and Wolves and Audience of One) before relocating to Paris in 2006. On the UK; " I didn't like the food or the weather (in the UK). And I don't think Britain really liked me either. But I love British audiences. They are loyal and very honest. It's the best feeling when some brawny Northerner comes up to you and says, "You know that magic fairy song... that one made me cry it did". Although Nadeah and Art tried to continue with the loveGods in Paris, they didn't find the right musicians. So she stopped music and worked as a part- time model and hostess at an upmarket cafe. Working in Cafe Ruc (a branch of the notorious 'Costes' empire) she met Italian Grammy-nominated arranger Nicola Tescari, who later produced her first album. Through this chance meeting she was introduced to classical heavyweights Viktoria Mullova and Katia Labeque who soon invited her to join B for Bang (a classical project dedicated to Beatles) with whom she recorded 'Happiness is a Warm Gun' on their first album and various songs including 'Because' on their second album. Shortly after that , French producer Marc Collin heard her play in a bar in Bastille and asked her to sing four tracks on his Hollywood Mon Amour 80's soundtracks revisited project. He then invited her to replace Camille and Phoebe KIldeer in the french collective Nouvelle Vague and for three years Nadeah co-fronted the group with Melanie Pain and Helena Nougerra. She appeared on 2008's '3' with a rendition of Magazine's "Parade" with Barry Adamson amongst other songs. On Nouvelle Vague: "It was an amazing experience. I wasn't sure I would ever get back on big stages again. Marc met me while I was at school studying French so that I'd be able to get a real job so it was like a sign that maybe I was still meant to be making music.It was surreal and very beautiful to find myself back at the venues I'd played in the loveGods. On my last UK tour with them (Nouvelle Vague), we headlined the Royal Albert Hall, that's when I thought, OK, now you can move on." On going solo: In between touring dates Katia Labeque offered Nadeah the opportunity to record her solo album in her studio in Paris. It was released in 2011 and she appeared on all of the major TV shows including Le Grand Journal, Taratata, One Shot Not etc. At the same time she became the face of French clothing label IKKS and toured extensively throughout France supporting artists such as The Do, Charlie Winston, Yodelice and Aaron and then for the following 24 months she toured Europe, Britain, South America and Australia as headline act "Our tour is the never-ending tour-my musicians often complain that they never get a chance to cry at the end of this tour cause it never bloody ends". Finally it did end, September 2013. She is currently working on her second album, a more electro-rock inspired album produced by Rob Ellis (PJ Harvey, Bat for Lashes, Anna Calvi) and Marc Collin. She is also preparing for her first role in a feature film which will be shot later this year in Rome, Italy. 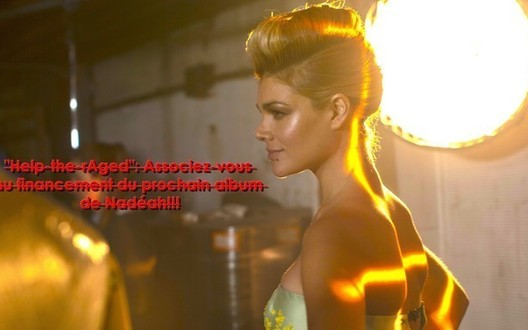