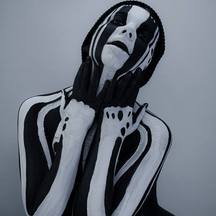 How it all began... Vilija Vitkuté born in Klaipeda. Lithuania on 4 January 1992. Initially Vilija knew that she will become an artist from the reallly early days. From 6 to 19 years old, she was learning in music and art gymnasiums in Lithuania, studying fine arts and music. 2010 Vilija moved to Sweden to realize her dreams, ideas and take diffrent opportunities through art for creative projects. Through hard work she began creative art teacher working in Dalarna. People began to recognize and see more of her art through media, art shows and exhibitions. In 2013, she received culture Grant and mentor for the great work she has done in the cultural center Asken, the Grant was also named bt her name Vilijastipendium, In 2013 Vilija began working on her art project name "other species" Wich few succeed at an early time. Other species have reached the Lithuanian contemporary art critic interests, and even earned awards in the best portraits by professional photographers from around the world, recently it was publicated at planet news, the world's most interesting artists magasine, legends town and conversations and she is going to compete with world greatest body artist in Serbia in 2013 october. Now the "other species" project is growing and working with professional artists from Lithuania, Great Britain, Sweden, USA and Africa by making short films/music video in Iceland, cultural festivals with music and body art workshops, exhibitions, tour, fashion and photo sessions and so on.