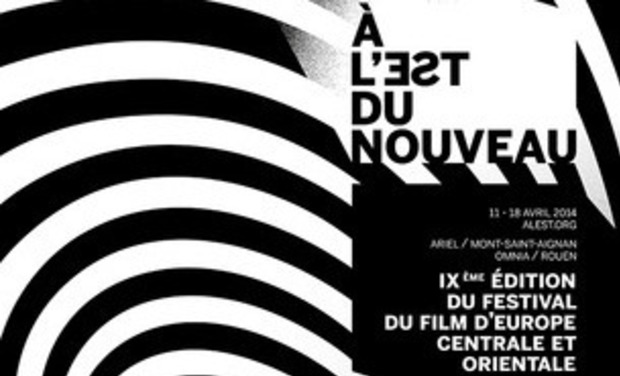 In this way, the festival introduces new cinematographies, bringing fresh perspective, as much through forms as through content, on the societies they come from. The festival proposes works by committed filmmakers, in order, for the audience, to experiment intense and original moments of cinema.

The number of countries represented by the festival has increased from one edition to the other. Launched in 2002 and originally focusing on Czech cinema, the À l’Est, du Nouveau festival has extended and is now representing no less than 12 countries : Austria, Bulgaria, Estonia, Hungary, Poland, the Czech Republic, Romania, Russia, Serbia, Slovakia, Slovenia and Iceland.

The festival has awarded and been honoured by the presence of major representatives of Eastern cinema, such as Karel Vachek, Benedek Fliegauf, Leszek Dawid, Jerzy Skolimowski, Ferenc Torok, Paul Negoescu, Iva Plemic and many others.

The À l’Est, du Nouveau festival makes a point of creating a link between the different cultures represented in its film selection. Joint efforts between the festival, cultural structures and local associations has enabled the creation of a group of regular spectators. Indeed, about 6000 people have attended the screenings on a regular basis, breathing life to the festival and its atmosphere of conviviality.

The ninth edition of À l’Est, du Nouveau will take place in Rouen and its area, from 11th April to 18th April 2014. Thanks to the success of its previous edition, the festival will pursue its innovative work by bringing together the best of actual production and great films of the cinematic heritage, as well as experimental works. Most of the films are exclusive or previews. They carry great meaning and offer the audience of Normandy the opportunity to discover this other cinematic language and to explore the themes, rather unknown in France, that challenge these societies.

In addition to the screenings, the festival proposes film workshops for school audiences, Q&A's and master classes on themes reflecting current events in Eastern Europe, litterary encounters/lectures, concerts, and the possibility to be part of the Student Jury.

The À l’Est, du Nouveau association needs your support to carry on with the ninth edition of the festival ! 2500€ would enable the festival to continue to propose exclusive works (the estimated budget for the purchase of the films is 9000€, 5000€ for the rental of the film theatre, 500€ for film translation, and 1000€ for the shipping of the film copies). It would also enable the festival to propose Q&A's after the screenings, with directors coming from Eastern Europe to meet the audience (transports and housing is estimated to 10,000€). Finally, this financial support would also participate in getting the audience to discover Balkan music through the organisation of concerts (estimated budget for artists is 4000€).