Let us support the school of Pahou in the southern part of Benin to open evening classes for women and children in need. 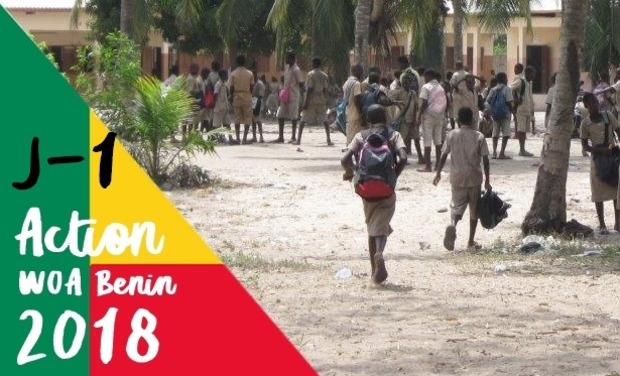 Our action consists of the construction of a 200-square-meter building equipped with a solar roof, which would supply electricity for the school.

WOA is an international solidarity organization that has been active since 2002, with a local branch in Benin from 2006 that has been enacting projects in favor of women and children. WOA Benin has previously renovated the infirmary and the library of the school in Pahou, and it also annually sponsors all the young women in the scientific field. The 2018 WOA Benin action dedicates itself in the continuation of such support for the school’s development.

We noticed that there were not enough classrooms inside the CEG, making some pupils take classes outside the classroom under challenging circumstances. Furthermore, classrooms are not lit and there are no computers available due to hardly any stable power supply. Moreover, a great many women in the region have no access to education, leaving them no option but to work during the day.

We decided to counter the 3 issues with the creation of additional rooms, including a computer room in the building with a solar panel that will allow light to travel in several classrooms. This will make it possible to provide evening classes for women and children who are faced with challenging situations.

The purpose of this project is to support women’s education, which is one of the challenges that the association/organization set as a mission to accomplish. Providing electricity will help the development of the CEG and will as well enhance the teaching and learning environment thanks to the equipment such as lighting and computers. The surplus energy generated will be made available to the locals to promote income-generating activities.

The study on technical feasibility was carried out by the engineering students of the French engineering school Arts et Métiers, in Paris, which has been collaborating with WOA since 2015. “Last but not the least, EDF foundation, a long-standing partner of the association, has decided to sponsor us once again by covering most of the expenses necessary to build the photovoltaic roof.

Your donations will help finance a part of the school, and for the construction to be able to begin in September 2018.

The global budget for the projet is 200 000€ including the construction of the 200-square-meter building, the photovoltaic solar roof, the battery for electricity storage and the equipments (computers, lights ...)

WOA will spend all the amount gained merely for the purpose of financing the project.

Your name will be added to the video of the project !

You will reeceive a postcard signed by all our team !

You will receive a T-shirt from our organization !

You will receive a WAX T-Shirt hand made in Benin by local artisan !

You will receive an invitation to assist to Africa Lyric's Opera in Théâtre des Champs-Elysées (Paris) in September 2019 !

You will sponsor a young women in the scientific field of the school for a year !

Your name will be given to the new building !

You will be invited for the inauguration when the project will be completed !