Help Sooheer to produce her 1st album with an american legend

Produce my first solo album with an American music legend ! I have one foot in the big league, help me put the second one in !! 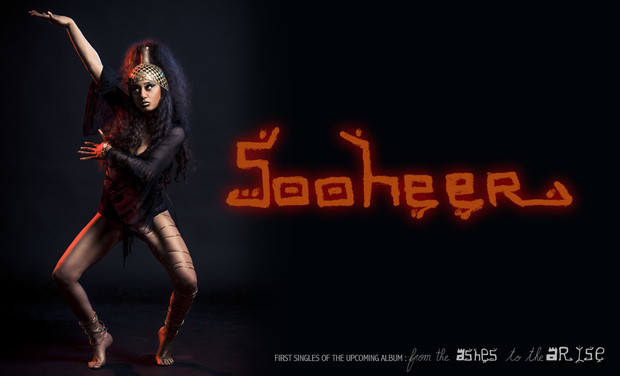 Help Sooheer to produce her 1st album with an american legend

" I was born just between the desert and the sea, i became a sandman. And all my time slots are full of fables ... I am a Fable merchant !! "

I am a poet first of all, i have lived in the middle of the Beaujolais vineyards for almost all my life and one day i got tired of the silence of my words, so i decided to learn to sing them, to put them into songs and to rap and sing them myself, after all you are never better served than by yourself !

I fully invested myself in this crazy project in 2006. I participated in Lyon every week in jam sessions, open stages, open mic for several years to confront the audience, confront myself. Discreetly, humbly, i learned to sing by singing the songs of the artists i love, Amy Winehouse, Erykah Badu, Sade, Marvin Gaye, Curtis Mayfield, Jacques Brel ... and this until 2011 !

In 2011, i met the members of a funk band from Lyon "The Funky Drive Band" and participated in the adventure of their first LP entitled "Dance or Die" released in February 2012, after several concerts in France we leave in August 2013 on tour in California, a breathtaking and unforgettable adventure !!! This album will also be distributed in Japan from October 2016.

During a solo trip to New York in 2013, i met by a happy coincidence the rapper Kool Moo Dee and Dj GrandMixer DXT, a friendship was forged with DXT, he appreciated my style and my artistic personality, he advised me and pushed me to go solo. He was one of the first to use turntables as a musical instrument in the 1980s. Recognized as a pioneer, he is considered as the first turntablist. He is also known to have made a significant contribution to the Hip-Hop scene by popularizing djing with his "scratch" on Herbie Hancock's "Rock it" track ! He won several Grammy Awards in 2018, to reward his career and his contribution to Hip-Hop culture and the others for the soundtrack of the film "The Defiant Ones" by and with Dr DRE released in 2017.

(The picture below it's GrandMixer DXT with Herbie Hancock)

It is only in 2015 that i leave the band "The Funky Drive Band" and after that i invested in a home-studio and began writing in March 2016 my first solo album entitled "From the ashes to the arise".

In 2017, in Lyon, then armed with my first 5 songs, i stuck up, between 2 interviews, the American rapper Shabaam Sahdeeq who came on European tour and left him no choice but to listen to my songs ! Bim !!! My nerve pays off, he falls for one of my tracks entitled "La fête" ("The party") and asks me to participate in what he calls a "summer hit" ... Woah !!! To hear this from an artist who has collaborate with Eminem, Mos Def, Common, Busta Rhymes, Redman ... I was very happy and honored ; )

In 2018, i continue to write the rest of the album, 7 other songs are created and i also buy from composers and beatmakers all the commercial licenses of the instrumental bands that make up my album. I register the copyright France and USA of all my titles, as well as my domain name and the calligraphy of my name and logo.

In 2019, i record 2 professional studio tracks "Show me who you are" and "Mango". I would like to make a video clip for each track. I was able to do a shooting with a renowned photographer and director, Dominik Fusina, to dress the single "Show me who you are" in video, as well as the cover of the single and the album. I finally have a real artistic director, a genius, a multidisciplinary artist himself !

This picture below is extracted from a video we started to shoot but not able to finish because of the budget. It's for my next single "On my bed"

" I WANT AND NEED YOUR HELP TO FINALLY SEE THE 12 LITTLE BIRDS I CREATED FLY, STILL LOCKED IN MY COMPUTER CAGE, THEY NEED YOUR BREATH TO FREE THEMSELVES AND SING YOU THE STORY OF THE PHOENIX THAT I AM ! "

Above, i said "One is better served than by oneself" certainly it is true but here i am out of breath, i am at the end and so close to the finish however !

A year under contract with a producer of a major record company taught me a lot about working in a professional studio and about myself too. The contract was broken because i didn't like the artistic aim he projected on my music and my person... Now i know that my independence and integrity count more than anything... I want to sell my music, not my soul !! Even if i learned to be more professional with this experience, the break-up was painful, a year of work and in the end my 12 little birds returned to their cage ...

The photo below is the future cover of my album in progress, this shooting represents the phoenix in ashes, I still have to do the 2nd shooting where I would be dressed in white, gold and white feathers to symbolize the arise

So i took my little birds in their cage, their cage in a bag, the bag on my back and flew away on the wings of a steel bird that dropped me off in New York on April 6, 2019 ... ah yes ! I took my nerve with me too ; ) and i texted the next day GrandMixer DXT "Hello you're awake ?" he "Yes" i call him and tell him i'm in New York he tells me he's in Philadelphia, we finally meet at his house in the afternoon, i tell him about my breach of contract with my producer, my wish to remain independent but my desire to produce something of quality, and tell him "How much will it cost me if i make the album with you ?" He laughs and tells me that it's not a question of price but of time and that he now has 2 partners with him since he won Awards, he's more expensive than before etc.... I stop him and say "Look D, i took a plane ticket from April 6 to July 5, i took a room not far from your studio, i have enough for my living here for 3 months so you have 3 months to record, 1 day here, 2 days there, and i let you convince your partners to make me a friend rate, after all it is you who pushed me to start solo, well here i am alone there far from mine and in your hands !" He said to me, "You are crazy !! Really out of your mind !!" He called his agent, the three of us met the next day, a week later i had a friend's price and a contract stipulating all the clauses requested !

I made a first deposit to be able to block studio days, i start the first session on May 3, 2019, here is my bank account too is out of breath, i have put everything, everything bet on these little birds, i only have enough for food and travel for 3 months to do my own promotion.

I moved to Willingboro, New Jersey, i had my very first interview on an American radio station, invited by Rhonda Supreme Tharpe and DJ Kam aka The Heavy Hitter, he made many new artists famous by broadcasting their songs on all the radio stations. He has received numerous awards from major record companies ; )

Wednesday May 22, 2019, i will be interviewed by a big radio station in Philadelphia, you will find all the links of the interviews soon on all my social networks.

Here i fight, i fight again and again, i did everything i could, as best i could, BUT NOW I WON'T BE ABLE TO DO IT WITHOUT YOU, WITHOUT A LITTLE OR A BIG BOOST, WITHOUT YOUR BREATHE my 12 little birds will stay locked in the cage of another computer for a long time before being finally released !!

I can't wait ... so eager to make you discover them that i present you 2 of the 12 birds to convince you of their liberation ; )

I shooted by my own the video for "Mango" few days ago in Philadelphia, Willingboro and Palmyra, with my phone, the others videos were shooted by me with a camera in 2013 during my tour in California, a trip in Las Vegas and in New York, i send all the videos to Dominik Fusina who clipped and directed the video (Bravo Dominik ! Thank you with all my heart and sorry for the whole night you spent awake to fix that) It costed me 5$ for a selfie-stick, 4$ for a mango and a coco nut, 4$ an ice cream !! Imagine what i could do if i had the budget ?! This video made in a hurry is for you KissKissBankers as a first present for all of you and to prove you my motivation and my determination to reach my aim ; )

It's up to you to play now, to go on stage with me, i'm counting on you to forge me the key that will free my 12 little birds from their cage and this key is called $$ Money Money $$

I will be able to reward each of you no matter how much you contribute, thank you in advance for your trust and support !

Full of KISS KISS to you from America whether you BANK or not ; )

This sum of 11 000 € will allow me to finance and realize the most important step of the album:

Rental of the studio in New York, 12 days of recording, plus the mix and mastering by GrandMixer DXT

Final shooting and realization of the album cover

Press  vinyls from the album 500 copies

Press CDs in physical format in digipack of 5,000 copies

FOR ANY DONATION OF 4000 € OR MORE YOU WILL GET THE PHENIX PACK WITH YOUR COMPANY LOGO ON MY ALBUM AND ALL MY SOCIAL NETWORKS. (For that contact me in private message)