After Us, Only the Burnt Earth (2012) is a documentary film directed by Delphine Fedoroff, set in the Chernobyl region 25 years after the nuclear explosion. The film plunges into the core of those living in villages that refused to integrate into an exclusion zone, throughout several seasons and truth cover-ups. By supporting this project, you are helping us giving back a voice to the people, for whom living on their land has become an act of resistance. 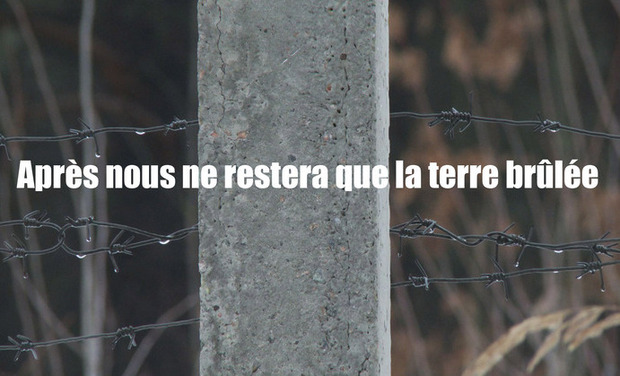 “One day, in our Chernobyl district, four villages were burned. Russians came to Chernobyl, people from Moscow, firefighters, they threatened us and said “after us only the burnt earth will be left!” They said it and they did it. There were helicopters with flamethrowers.”

In April 1986, the Human is confronted with one of the greatest ecological disasters in their History: a nuclear explosion of unparalleled magnitude.

Exclusion zones are set up to accommodate the disaster survivors. The village of Dytiatky and its inhabitants refuse to integrate into an exclusion zone and continue to live on their land, with their traditions and histories. There are premature deaths among those displaced and a saving continuity for the Samossiols, those who “resist/return.”

After 25 years, what does this community think about its journey? And what do their grandchildren think? What reasons motivated the disaster victims to flee or to stay? It is in the village of Dytiatky, bordering the “Zone” with those who “return”, that we must ask ourselves…

In 1986, I was six years old. My younger sister had just been born when the Chernobyl Nuclear Power Plant exploded. The television made a timid entrance into our home and for a time I witnessed my parents’ reactions to what I would suddenly begin to question: the external world and the relationships it can induce with the intimate. We never spoke about Russia other than as a kind of silence, a taboo, an inaccessible unknown. Then, suddenly, my parents discussed this forbidden country; the words and images evoked nothing in me. I felt a strange mix of contrary emotions in regards to the Chernobyl accident; a confusion of anger and joy that this disaster had provoked “the end of, the fall of, the possibility that, no the certainty that, the fear that, yes but imagine if…” For me, this was what war meant. Obviously, I understood that something would change, should change in the course of History and in my own history, a young girl, part of whose family came from a country where “that” seemed complicated.

Through this film, I wish to combine all the views and questions that call to me in a place that would come to bind individual histories with the greater History. This place is Dytiatky, a village adjacent to Chernobyl.

My film won’t just depict destroyed houses and sick or reckless people wishing to stay on threatened land; it won’t just speak of the grief and disappointments, as certainly the difficulties and misunderstandings around this subject are numerous. I am not interested in the sordid in itself, but in the Human in all their complexity and capacity to control, reproduce, rebuild themselves.

This film must give space to the words and depiction of a population little or badly understood; to my doubts and their facts, to my facts and their doubts. Through my framework, I am trying to suppress a particular kind of ignorance, the kind that says of others: they are crazy, they are old, poor unfortunates they have no choice, they don’t realize the danger.

Delphine Fedoroff was born in 1980. Initially following a traditional academic trajectory, she begun a psychology degree with a specialisation in art therapy, but soon left this behind to give free rein to art and, more specifically, to moving images.

Very quickly involved in political community milieus, Fedoroff met thinkers, actors and creators who drew inspiration for their raw material from the street. The non-profit organization “Desimages”, with whom she collaborated through neighbourhood programming or productions, became an anchoring place and a way to express her autodidactic side. To this end, her camera became an indispensable companion, the internal and external flash united in a single image. For this director, “art or film must be as close as possible to a battle.”

Delphine Fedoroff currently works as project leader for the NPO “L'Autre lieu,” a research-action centre that focused on psychiatry and its alternatives. She lives in Liège, Belgium.

When we decided to invest in this project, the post-production of the film had been suspended for various reasons since the completion of the shooting. It was meeting with the director that prompted us to produce this film. Her discourse and unique worldview, interspersed by a sincere personal approach, touched us.

After Us, Only the Burnt Earth represents the kind of film that we wish to support, first of all because it hinges on a sort of eulogy of slowness. Taking the time to learn a language, setting the camera and allowing things to evolve through meetings and reflections, Delphine Fedoroff stands for a kind of filmmaking that takes the time to understand the other.

We consider a film’s production to be the first step towards its public. In this era, this type of project requires collective support to be born, and this is the main reason that pushed us to direct our focus on this type of financing and appeal to you. As producers, we wish to make connections between the directors and the public; a sort of reciprocal back and forth that gives life to a film.

While nuclear energy is much discussed, the 1986 disaster at Chernobyl reminds us how urgent it is to multiply our gazes on this fundamental issue for humanity. After Us, Only the Burnt Earth is one of these gazes. By supporting this project, it equally becomes your gaze.

Delphine Fedoroff brought back magnificent images from the village of Dytiatky, as well as the precious testimonies of the inhabitants. At this stage, we have an initial version of the documentary, which will nevertheless need an enormous amount of post-production work to finalize it. We need your help to finance the sound editing, grading, mixing, graphic packaging of the film and its distribution. We have set our collection goal at 5,450 Euros though, if we pass 100%, we will be able to go even further and organize more previews, produce more DVD’s and invite the documentary’s protagonists to the preview in Kiev.