For 2 years, Eléonore has been creating Archibald jewelry in her parisian workshop. Next step: developp the brand internationally! 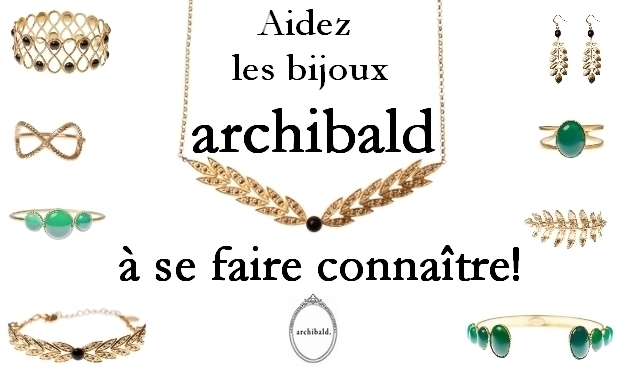 Archibald is a young jewelry brand created by Eleonore Lindroth, the designer.

The jewels are in gold plated brass (24 carats), and semi precious stones.

For now almost 2 years, Archibald made its way..

February 2012: creation of the brand Archibald

May 2012: launching of the website (www.archibaldbijoux.com) and first collection

From June 2013 until today: many fares in Paris such as the "Take me out", the "Galerie Simone" or the  "Court-Circuit"

December 2012: First appearance in the French press.. in the Elle magazine!! So happy!

May 2013: first real shooting for the summer collection with Léonor and Maurizio, the model and the photographer, who I thank again so much for their help and talent!

July 2013: first international tradeshow , the Who's Next, Porte de Versailles, in Paris

Slowly, Archibald is growing and making himself known.

Some shops have already fallen for his charms (http://www.archibaldbijoux.com/points-de-vente).

However, Archibald needs a hand to increase his notoriety!

These few shops are not enough! They marges are so important, it will need ten times this to give Archibald a chance to survive!

Also, Archibald needs to appear much more in the press, to become a reference for French costumers.

And for all this, I really need your help!

Eléonore in her workshop, in Montmartre, Paris.

The money will help Archibald to increase its popularity, increase the sales and help him continue to exist, and this will need:

- to take part in two tradeshows in January in Paris, to increase its shops (selling points) around the world.

And as you may know, this trasdeshows are really expensive (4000 euros for 4 days for 4 meters square)!

- to employ a press agent to appear in more magazines and increase the credibility.

- to employ a commercial agent to help Archibald find points of sale around the world.

- to employ a community manager, to make people know about Archibald via social networks.

These 4 things are really important for Archibald.

And this is why I need your help!