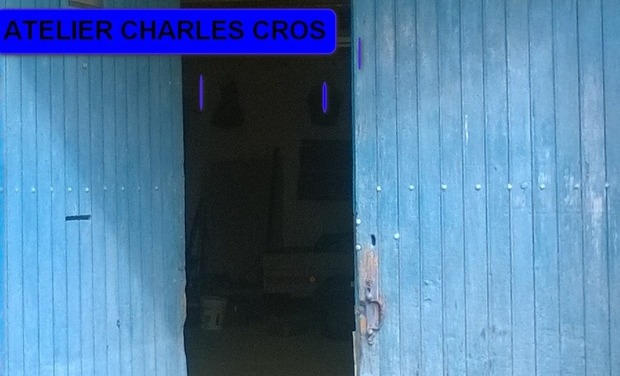 My project consists of creating a cultural and artistic space : l’Atelier Charles Cros in the family house in the medieval village Fabrezan, where he was born.

French inventor and poet who alternated the writing of avant-garde poetrywith theoretical work in photography and sound recording.

In 1860 Cros began studies in medicine, but he soon abandoned them for a life of literary and scientific pursuits. In 1869 he published a theory of colour photography in which he proposed that a single scene could be photographed through glass filters coloured red, yellow, and blue.

In his book Études sur les moyens de communication avec les planètes (1869; “Studies on the Means of Communication with the Planets”), Cros speculated on the use of a huge concave mirror with a focal length equal to the distance of Mars or Venus from Earth. Sunlight concentrated by the mirror would fuse the planetary surface of the distant planet in geometric patterns that would presumably be intelligible to the higher forms of life living there.

In 1877 Cros wrote a paper that described a process of recording sound on a glass disc. Like that of his countryman Édouard-Léon Scott de Martinville, Cros’s process involved tracing sound waves by the lateral movement of a stylus on lampblacked glass. Cros suggested that this glass could be photoengraved to produce lines in relief and somehow could be used to replay the recorded sound. He gave a copy of his paper to the French Academy of Sciences in April 1877, three months before Thomas Edison’s invention of the phonograph,

As a literary figure, Cros was a well-regarded poet and humorous writer. He frequented the salons of Parisian Symbolists and Décadents, and especially the Salon of Nina de Villard, Nina as La Dame aux éventails, "Woman with Fans" painted by Edouard Manet in 1873.

With those devotees of the avant-garde, he aspired to create a type of poetry that, through lyrical, rhythmic language and striking imagery, would succeed in evoking the sensations and emotions of the artist. His Le Coffret de santal (1873; “The Sandalwood Chest”) was praised by Paul Verlaine, and Le Fleuve (1874; “The River”), a long poem in alexandrine verse, was illustrated with watercolours by Édouard Manet. His poem Le Hanreng-saur « The Kippered Herring » inspired Ernest Coquelin to create what he called monologues, short theatrical pieces whose format was copied by numerous imitators

Cros’s poetical work brought as little reward and recognition as did his inventions, and he died dispirited and alcoholic. In honour of his contribution to sound recording, the Académie Charles Cros in Paris awards annual prizes for the year’s best musical recordings.

Academy of Sciences, French Académie des Sciences, institution established in Paris in 1666 under the patronage of Louis XIV to advise the French government on scientific matters. This advisory role has been largely taken over by other bodies, but the academy is still an important representative of French science on the international stage. Although its role is now predominantly honorific, the academy continues to hold regular Monday meetings at the Institut de France in Paris.

- Insulate with natural products, lime and hemp and seal the space ( refurbish the old stable),  2600 euros

-  Withdraw and reverse opening of the present portal to be used as shutters . 1300 euros

Many thanks for your contributions