(AV = Agnès Varda) (JR = JR) : help them hit the road in their photobooth truck to make a film together in Provence. 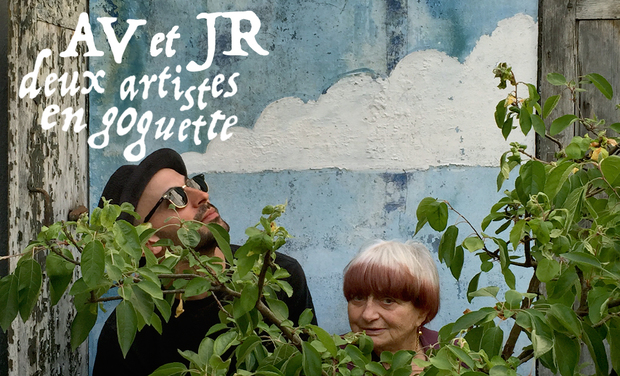 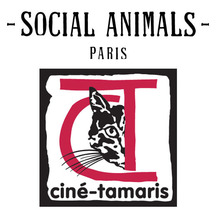 Ciné-Tamaris and Social Animals have found part of the financing, but we need a bit more.

- AV: I know and love the gigantic photographs that JR puts on old walls, urban stairways and floors (ground ?). I've seen some in person, and I also have books with photographs of the large-scale installations showing the faces of unknown people, an old couple marked by the years, their eyes questioning us...

- JR: I've seen Agnès Varda's documentaries where she gives a voice to those we rarely hear: gleaners, the poor, widows... She never misses an opportunity to point out life's amusing details. She's got an eye!! And I understand why her eye was drawn to my work, considering her interest in the murals of Los Angeles.

The Gleaners and I, a documentary by Agnès Varda (2000)

The Gleaners and I, a documentary by Agnès Varda (2000)

- AV: This project came about by chance… Actually my daughter Rosalie played the go-between.

- JR: I invited Agnès to my studio, I had a surprise for her…

- AV: He had enlarged my self-portrait with a Bellini painting I took in Venice in 1960. He wanted to make another portrait of me with that image.

- JR: Yes, that was my idea and here's the result (I wasn't expecting her to thumb her nose!).

JR taking Agnès' portrait with her self-portrait from 1960...

- JR: Mos Def dropped by that day. We all had lunch together. An explosive encounter!

- AV: Oh yes, it's always better to talk when you're eating something! Right off the bat I wanted us to figure out a plan so we could work together.

- AV : We met up in New York a short time later. He was presenting his short film Les Bosquets at the Tribeca Film Festival. That night there was a little fiesta at his place…

- JR : I also had Agnès pose on a Solex in front of the photobooth truck. The adventure continues…

- AV : So that's the project. We're going to be truckers.

- JR: Yep! And when you're not driving, you can catch trucks like you did in The Gleaners!!

Agnès catching trucks in The Gleaners and I

- AV : We'll go to to the Luberon region in Provence for an adventure of encounters sparked by this wonderful truck.

- JR: She says we're going to the Luberon because her daughter Rosalie knows a place in Bonnieux…

- AV: …It's a family house, actually a hotel, that Rosalie has entrusted to the private club Le Silencio. They're turning it into a temporary hotel called La Maison de l’Aiguebrun and inviting artists to stay there. They will provide food and shelter for us during the shoot.

- JR: And we'll put some images up on their walls.

An olive tree in the Luberon...

- AV : I looked up the market days for certain villages, so we can be sure there will be lots of people, goat cheese makers, button vendors… etc!

Button vendor at the market

- JR: So while we're at it, we'll invite them into the truck, take their portraits and offer them enlargements of themselves. But the main thing we'll be doing is improvising art installations in the region.

- AV: I want to film the locals, the people of the region, their gestures, their houses, their children... and evoke their concerns.

- JR: I want to photograph Agnès while she's filming.

- AV: And I want to film JR while he's taking photographs!

- JR: You know, we're going to need a director of photography to film the whole enchilada... But I'll bring a little camera so I can film you too! You inspire me!

- AV: Or a DOP! I'm already looking forward to the editing. I think that may be my favorite part of the filmmaking process.

- JR: I'll come along for the editing too!

-  AV: Of course, we're co-conspirators on this project. You've inspired me, with your truck full of images, images you give away, images that make it possible to connect with people.

- JR: That's because my truck is equipped to make giant enlargements.

- AV: As usual, you and your guys are going to put the giant photographs on old walls and other surfaces.

Collage by JR on the streets of New-York: This photograph featured on the cover of The New York Times Magazine on April 26 2015

- JR : Don't worry, we'll come up with other ideas, that's what art is about, finding new challenges! We'll get all over all kinds of surfaces, large and small, smooth and bumpy! Nothing can stop us! And we'll do it with folks we meet down there!

Project for a collage using a photograph by Agnès Varda

- AV : Right, but I want us to get permission from the property owners, the mayors... We'll play by the book.

The artists have cheerfully told you about their project.

Now it's down to us, the production companies (one botanical, one animal) Ciné-Tamaris & Social Animals, to get serious and make it real!

The production of this project was instantaneously launched on the enthusiasm of Agnès and JR.

The artists want to be on the go by July, so the pressure's on. Your contributions today will make it possible for us to launch this shoot right away.

Our artists are going to meet the people of Provence, talk with them, take their portraits, give some to them, enlarge others into giant formats and stick them to walls, ramparts, etc. This project is a documentary about the creation of these spectacular collages, but it also includes the actual execution of the art installations. They will be temporary for the most part, but some of them, in specific cultural locations, will be permanent.

The total budget we need in order to deliver a 26-minute film, color-graded, mixed and ready for broadcast, is estimated at €300.000 (tax excluded).

We have begun to gather funding from the usual sources for film production (television stations, CNC, regional funding), but they don't quite cover the total costs, and will be paid out over time, from the beginning of the shoot to the end of post-production.

The instant money provided by our KissBankers will thus cover part of our initial expenses. The details of our overall budget is somewhat of an inventaire à la Prévert (an eclectic list) including, among other things:

- A Chinese thermos so Agnès will always have hot water wherever she goes on the shoot;

- Lodging for the crew in the Luberon;

- Enough chocolate cookies to keep the crew alive and happy until 7 pm daily;

- Salaries and social charges to cover a crew of competent technicians from start to finish (from the driver of the camera truck to the mixer of all the sounds);

- A folding chair for Agnès;

If we raise more than €50,000 we'll let AV's and JR's creative imaginations run wild - she who thinks outside the box and he whose images are bigger than a bread box. They'll improvise additional scenes and situations, maybe take a spin in a helicopter or a ride on a hay wagon…

They have every desire to enhance the pleasures of the shoot... and the refinements of the editing!

Your name in the credits + a postcard of the adventure as seen by AV & JR.

Your name in the credits + a postcard of the adventure as seen by AV & JR + a 6 x 8 in. approx. black & white photo on "wallpaper" of AV & JR in the courtyard at 86 Rue Daguerre for the project launch (© Guillaume Cagniard).

Your name in the credits + a postcard of the adventure as seen by AV & JR + a 6 x 8 in. approx. digital color photo printed on traditional photographic paper of AV & JR in the courtyard at 86 Rue Daguerre for the project launch (© Guillaume Cagniard).

Your name in the credits + a postcard of the adventure as seen by AV & JR + a 6 x 8 in. approx. digital color photo printed on traditional photographic paper of AV on a Solex in front of the photobooth truck © JR-ART.NET

Your name in the credits + a postcard of the adventure as seen by AV & JR + a 8 x 12 in. approx. digital color photo printed on traditional photographic paper of AV with the Bellini painting as reimagined by JR.

Your name in the credits + a postcard of the adventure as seen by AV & JR + an exclusive, limited-edition 8 x 12 in. approx. digital color photo printed on traditional photographic paper of AV behind the wheel of the photobooth truck with JR at her side (to be taken during the shoot) bearing JR and AV stamps.

Your name in the credits + a postcard of the adventure as seen by AV & JR + an exclusive, limited-edition 8 x 12 in. approx. digital color photo printed on traditional photographic paper of a collaborative work to be determined (taken during the shoot) bearing JR and AV stamps.

Your name in the credits + a postcard of the adventure as seen by AV & JR + a kit containing all the previous prints.

Your name in the credits + a postcard of the adventure as seen by AV & JR + an exclusive, limited-edition 19,5 x 27,5 in. approx. photomontage of photos from the documentary, selected and composed by AV & JR, printed on traditional photographic paper, signed and numbered.