Help me to create my second short movie, AVALEZ! (SWALLOW!) and help the young french cinema ! 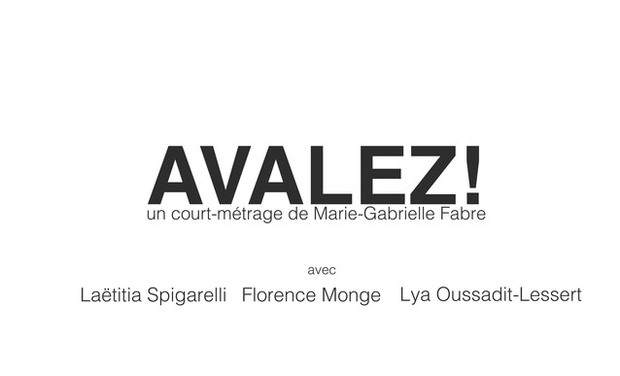 AVALEZ! (SWALLOW!) is the second short movie by Marie-Gabrielle Fabre. It shows three character, during a lunch time, in a no-exit but domestic universe, going into sacrifice and imitation of life.

At first, there is a little ordinary girl, Pauline. And there is the doll, Pauline’s flip side and its plastic and sweeten double ganger. We have also to count Pauline’s mother, a young, pretty, hard-worker and professional person, and their aunt, who is taken care of by Pauline’s mother. The story of this movie consists therefore of the relationship between these four women, which seem to have nothing in common.

And yet this mute and old and almost deaf aunt of her fascinates Pauline. She does not move. She does not talk. She is a growing silence. On one side, Pauline tries to make her talk and react, without great conviction though. On the other side, Pauline’s mother forces her aunt to eat and to swallow. But every attempt of both the mother and the daughter seems to be a failure. The aunt keeps being silent and mute. She detaches herself from everything. She seems to drift apart.

This ambitious second short-film represents the seeming banal story of four characters at different stages of life. Marie-Gabrielle Fabre is indeed interested in the metamorphosis of human bodies.

If one had to sum-up this short-movie, it would by putting forward the following questions: what is a body in front of the time? Where does mimetic resemblance or dissemblance leads?

Marie-Gabrielle Fabre finds her inspiration in her long research in themes such as metamorphosis, double-gangers, Western symbolical references as much as in influencing movies or filmmakers (Jacques Tourner’s La feline, Billy Wilder, Fellini, Bergman, or Xavier Dolan).

Texts and translation by ©Etienne Fabre.

Born in 1987, Marie-Gabrielle Fabre spend five years doing fine arts in Paris, Nice and London. She first works on painting before experience animated images and sound. Back in Paris, she works as an editor on short and long movies, then as a director assistant on shorts, music videos and fashion films. In 2014, she goes back to her writings and directs There was an evening and there was a morning with Olivier Dessalles as her DOP and Anne-Sophie Liban in a truth teller character. She then starts researches on how to film dance and bodies, and starts writing her first feature film, Body Game.

English citizen living in Paris, Gordon Spooner is director of photography since 1994. He has worked on more than 350 advertising films, music videos, short and feature films, and on some documentaries too.

Florence Monge will play the old lady. Born in 1944, Florence starts her carrer  late in life after living in Morocco a long time. Back in Paris, she is asked, after a theater release, to play in a short movie, and starts her career. She has now played in more than 70 short movies, music videos, advertising and feature films. She has played in Les Ravissements realised by Arthur Cahn (Femis) and selected by the Festival de Cannes's Ciné-Fondation,  in Aurélie Blanchard's short movie Les Collectionneurs, in Silence from Valentin Marro (short, 2014) and more recently in Quentin Lecoq's short movie La Force de l'Age (2014).

Laëtita Spigarelli, who will interpret the mother of Pauline, comes from the National Conservatory of Dramatic Art of Paris. She is known in particular to have played in Olivier Assayas's feature Clean (2004), in Manuel Schapira' feature Décroche (2007)  (for whom she receives the prize of the jury for her performance in the role of Léa to the Festival Jean Carmet of Supporting roles), in Olivier Assays's Paris je t’aime (2006) et and more recently, in Philippe Garrel's last feature La Jalousie (2013).

Lya Oussadit-Lessert will play Pauline, the little girl. Lya, born in 2008, is a talented and shy little girl. She played in Alice Vial'short movie, Gueule de Loup in 2014. She is doing theater and tap dance for a year now.

Donations will help to produce, promote and broadcast the film. the shoot will takes place in Paris the 13&14 of december and the film will be released in Paris on 01/27/15.

-creation of an original music in collaboration with artists: 1200€

TOTAL would be 9 900€, so complete the campaign is really important. It will help me to shoot with the minimum required. More donations will help me to create an even more beautiful short film. It will also help me to promote and distribute the film worldwide.