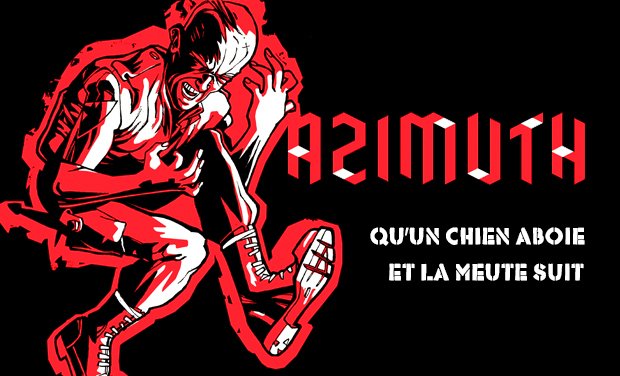 "A dog barks and the pack follows!"

Azimuth is the first movie of "les Films du Vril". It will be a short film of 30 minutes. The idea came from our desire to cross universes which have, according to us, vocation to meet and to become accustomed: cinema, fantastic comics, English scooter scene, literary esotericism, music… So many domains in which we evolve for several years and which we wanted to develop in this movie.

Between dunes and bunkers, Teufel will have to make a way towards a fate from which the sense escapes him. AZIMUTH will entail you in a dark and introspective universe. It will invite you in the internal journey. HIt will question you in the depths of your convictions. We need your help to realize this movie in the best possible conditions and to give it the scale that it deserves. The link which follows is not a trailer. We especially wanted to make you discover the particular atmosphere which we wish to share with you. We hope that it will seduce you! Join the Barghest community!

During a brutal wood (chase in a straight line whatever are the obstacles of the way), the youngest participant, novice in the discipline, is outstripped by his group. He gets lost in a vast domain of dunes at nightfall. Without instruments to guide him nor reliable marks, he begins then a long night-wandering in search of any track of the passage of another runner of hispack before him.       From signs to signs and symbols to strange indications, he will make a way through a labyrinth of ruins up to a beach on which he will be expected. He will soon understand that his running is connected to another event which concerns him and that the azimuth must be reached anyway.

Formed in Decorative arts, in visual communication and in scenography in the 90’s, he evolves since in the running waters of the graphic conception. Illustrator, scriptwriter, sometimes to storyboarder, draftsman of comics, and then graphic designer multivoque, video director, painter, he envisages the image as usual a carrier of the narrative, and even as the narrative itself.   The moment is convenient: the manners to tell stories connect and crowd today. It would be necessary time, according to him, to dare to tell all the stories which he holds.

History and music enthusiast, he studied communication followed by a diploma in the EF2M (professional music school), then began a short career of musician with the autoproduction of a LP and numerous concerts in various bands (The Salamander, Dead end, Ronin, Setsuna). Trainer then cultural mediator, he turned to institutional communication. He pursues at the same time his musical practice and wishes from now on to develop his universe in the creation of theme musics. The Azimuth project constitutes for him a first stage and les Films du Vril will allow him to develop new forms of artistic expression tomorrow.

It has been 20 years since he mixes the experiences in production. Everything left from the meeting with the technique and the machinery in theater. Today he calls on to the last technologies to operate material and human means so that artistic or factual projects come true. He verges on shootings, festivals, sport events... He coordinates, prepares the budget, manages the operations. The handyman!

Yann PUDLICKI : private of the pack

Philippe BOURDON : private of the pack

JOFFREY COUSTENOBLE : private of the pack

François VERHEECKEN : private of the pack

The making of a short film of 30 minutes asks obviously for consequent financial means.

First of all, it is a teamwork, a team which gives everything so the project is correctly led to its term.

We shall be 13 people on the shooting: 2 directors, a production manager, 5 technicians and 5 actors.

The directors and the actors will not be paid for their work: the expenses for the inevitable nights to spend meadows of the site of shooting in Dunkirk will just be covered.

The collected sum will mainly serve to rent the equipment (lights, cameras and objectives, Drone, … )

and to assure the state control. Finally, a short film cannot be finalized without the work of post-production.

The harvest will thus allow to finance editing and mixing, to offer you a movie as high as your expectations (and ours!). If the wanted sum can seem important, here is in detail to what is going to be of use the money of this crowdfunding.

Other expenses are to be planned,  so if, thanks to you, the wanted amount is exceeded, and that adds it reached for example 12 000 €, it will allow to have more means for all the aspects of the production (remuneration for the technicians, the defrayal of the team).